G-LEC Solaris Enters the Galaxy at Climate Planet in Aarhus 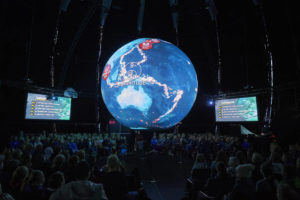 A gigantic 24m diameter ‘earth globe’, known as Climate Planet, has been dominating the Aarhus skyline since early June — to coincide with the Danish city being appointed European Capital of Culture.

Encapsulated within this giant model of the Planet is a smaller sphere, and as visitors arrive at the spectacular high-tech exhibition on climate change during the six weeks it will be stationed in Aarhus, they will be immersed in a surreal world of twinkling stars, generated by G-LEC Solaris LED balls.

Climate Planet is the brainchild of Henrik Rud, CEO of Koncept Aarhus, and he was soon sharing the idea of what he believed would be the largest facsimile of Earth ever produced, with Lars Nissen, operations manager at event A/V specialists, Comtech A/S. “When I first heard the idea I thought it was crazy,” admits Nissen. 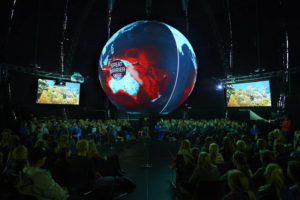 The Comtech specialist in turn contacted Kasper Gissel at GLP, with whom he has a long association, most notably working with him in 2009 at The United Nations Climate Change Conference (COP 15) in Copenhagen. On that occasion Nissen, then with Seelite A/S, deployed more than 1000 of the early GLP Impression fixtures to light the plenum rooms, television broadcast locations and other ancillary areas in a remarkable feat of energy conservation.

This time his interest was in creating a galactic starry sky. “I asked Kasper what we could do, knowing that once again, one of the provisos was that the exhibition should not consume much power.” 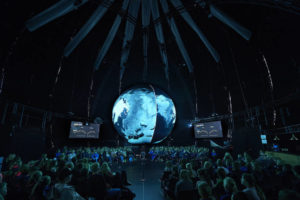 The idea for this deployment was first discussed at last year’s PLASA Show in London and finalised this Spring at Frankfurt’s Prolight+Sound.

As a result, Nissen has deployed no fewer than 1400 of the G-LEC Solaris balls, floating randomly in air, in 1-ball, 2-ball and 8-ball configurations, so that the source cannot actually be detected. There is different spacing between each ball and video runs between them.

To complement this, some GLP Volkslicht Profiles and some impression Washlights, mounted high up in the sphere, project an impressive output of blue light.

The lightshow has been programmed and operated from a ChamSys desk, with a video output for the Solaris Balls. 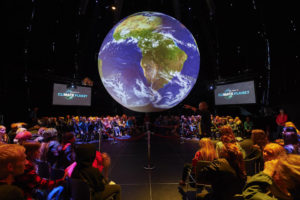 Reflecting on the challenge, and praising the support given by GLP, Lars Nissen reveals that from an equipment point of view Climate Planet had started out as a rental project for Comtech, but quickly turned into a sale. “This was partly because it required a lot of bespoke, and non-reusable curved trusses as well as video projectors and 4m screen in circular mode — but also partly because Climate Planet will go on tour,” he reports.

Following its six-week run in Aarhus the visitor attraction will relocate to Copenhagen and then embark on an eight or nine city tour over the next two years. 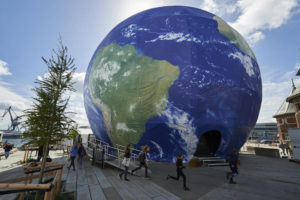 The venture has been privately funded and is supported by an organisation called Global Citizen, with cooperation from the City of Aarhus. All money raised will be donated to climate research.

Summing up, Lars Nissen said, “Everything about this project was challenging because we were working in the round in such a large sphere. But the result we have achieved certainly creates the impact I was hoping for — when people come in they just go ‘wow’.