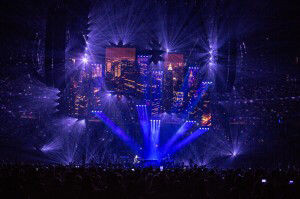 Production designer Steve Cohen’s association with Billy Joel dates back an astonishing 40 years. Based on this vast experience he has conjured up some further magic for the artist’s latest tour, which takes in a unique, open-ended monthly residency at Madison Square Garden. By becoming established as the fourth franchise at MSG the artist has reaffirmed his close association with New York City, and has been delivering some stupendous performances.

Along the production journey, as technology evolved into LED, so Cohen encountered the world of the GLP impression series — using both the original impression 90 and 120 RZ as well as the Volkslichts. But it was the later introduction of the impression X4 that confirmed his love affair with the impression LED platform.

This show, which celebrated the magic of Motown, ran in the city where his operation, Steven Cohen Productions, is based. “I have had a lot of success with that show and could see immediately that the X4 was a pretty efficient light. As an LED wash light I can set it at 50ft-60ft, as I do on the Billy Joel shows, and it’s amazing to see such a pure collimated beam.”

For this tour, lighting vendors, Atomic Lighting of Pennsylvania, have supplied 120 GLP X4 to help punctuate a concept which exploded from one original small show that Joel undertook in the UK. “I had some ideas with segmented video screens and I modified that for 360°, reconfiguring it and repositioning the video — and that drove the lighting plot.” 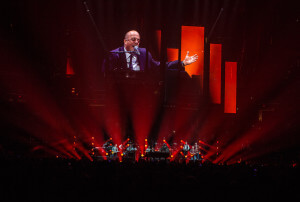 Both the MSG residency and his touring set plays in the round from the end of the arena, with Billy Joel’s piano on a revolving turntable.

The New Yorker has a decades-long history with the Garden. Since 1978, he’s played a record-breaking 47 shows, including a sold-out run of 12 consecutive nights in 2006, and a moving performance at the 12-12-12 concert benefiting victims of Superstorm Sandy. Capacity audiences of 18,000 have been flocking to see the artist in this new run of shows, many of them repeat visits.

And with his inspired use of video Steve Cohen is helping Joel celebrate the magic of New York “with animated scenery and video capture technology, both evocative and impressionistic.”

As a TV lighting designer he knows the importance of balance. “There are only two types of lighting used on the show and the balance we have achieved with the video gives us plenty of headroom.” 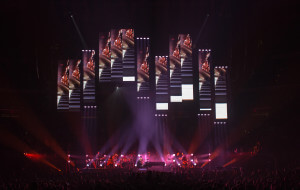 He is using the X4 both as a flood and a tight beam. “In fact I’m using every parameter,” he says. “It offers the best color of any LED light and it’s reliable, giving us a consistent color feel. On top of that they are lightweight and you get a lot in a small amount of space.”

The X4 fixtures are mounted on ten bars, purpose manufactured by Atomic Lighting and each containing four impression X4; some are set both above and below the random vertical video panels — which hang in separate strips to form the ‘broken’ wall — where they hold their own effortlessly. A further 27 impression X4 fixtures are placed on nine vertical booms at the back of the stage — three on each — with further units placed around the stage floor itself.

The geometry of the video design is such that when it fades to black, the silhouetted outline represents the Manhattan Skyline.

The shows further benefit from being directed by experienced programmer Mark Foffano, another long time Billy Joel associate, who has worked on every show since the late ‘90s.