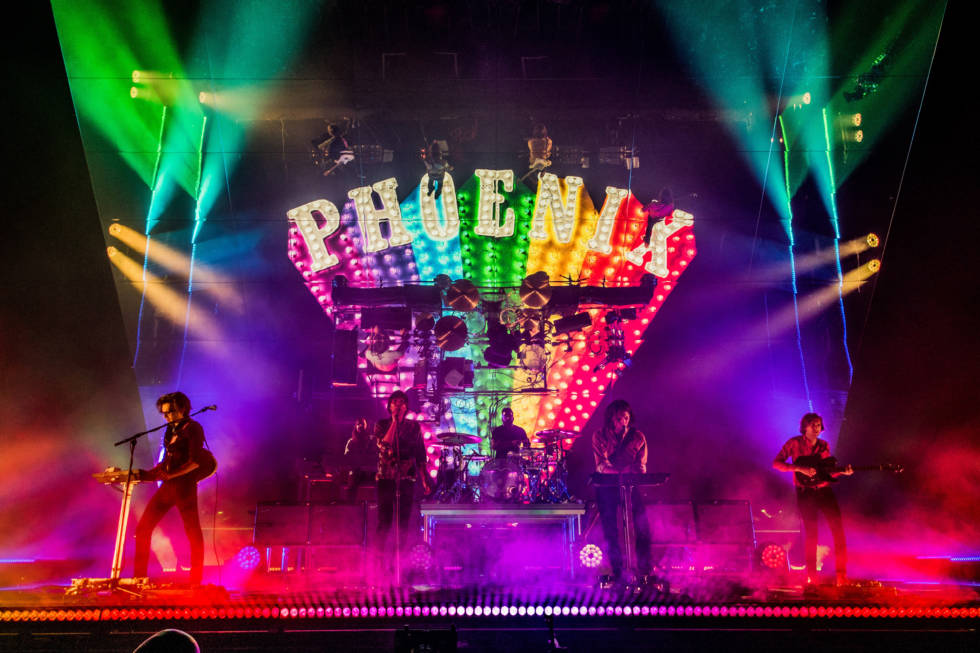 His scalable rig saw as many as 76 of the award-winning fixtures used at Paris’ flagship venue, AccorHotels Arena, during the long-serving indie pop band’s latest tour to promote their new album Ti Amo.

“Due to logistical or technical constraints related to rigging or weight loading we have been using a multitude of different set ups,” Pierre explained. “However, the one we presented at the AccorHotels Arena was the most complete.”

Although Italy and the new Ti Amo are the focus of this tour, the band have been featuring many popular songs from their repertoire. But audiences are equally wowed by a giant 110sq.m video floor, on which the band plays, and a large 45° angled overhead mirror as the backdrop, through which they can see all the stage action reflected from above. The remainder of the dynamic impact is completed by the X4 Bar 20s.

Pierre Claude had already been using around 27 of these fixtures on the band’s smaller club and summer festival dates, having first seen them in use at an EDM festival in Zürich. “But when I needed to upgrade the lighting plot for the arena shows it was the Bars that I wanted to multiply as a matter of priority,” he said. 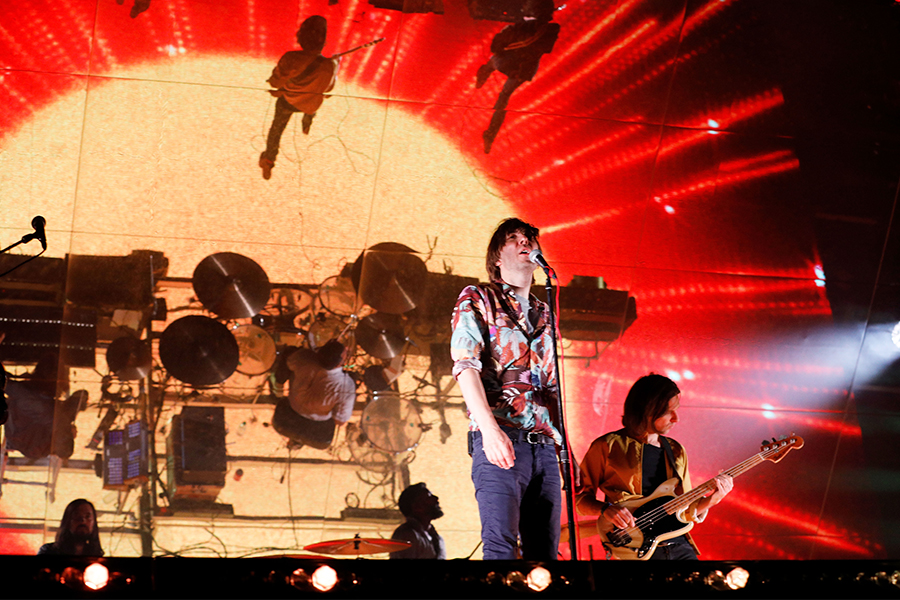 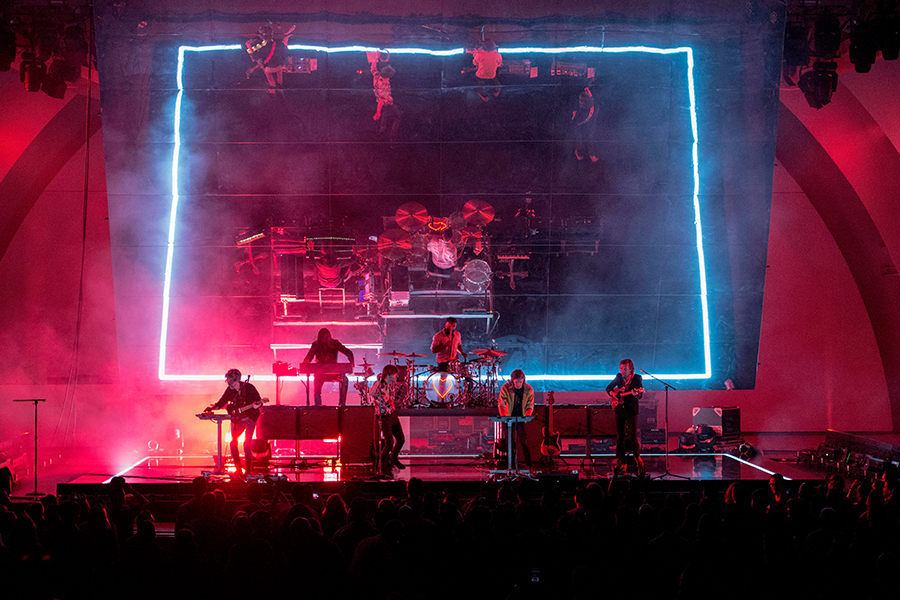 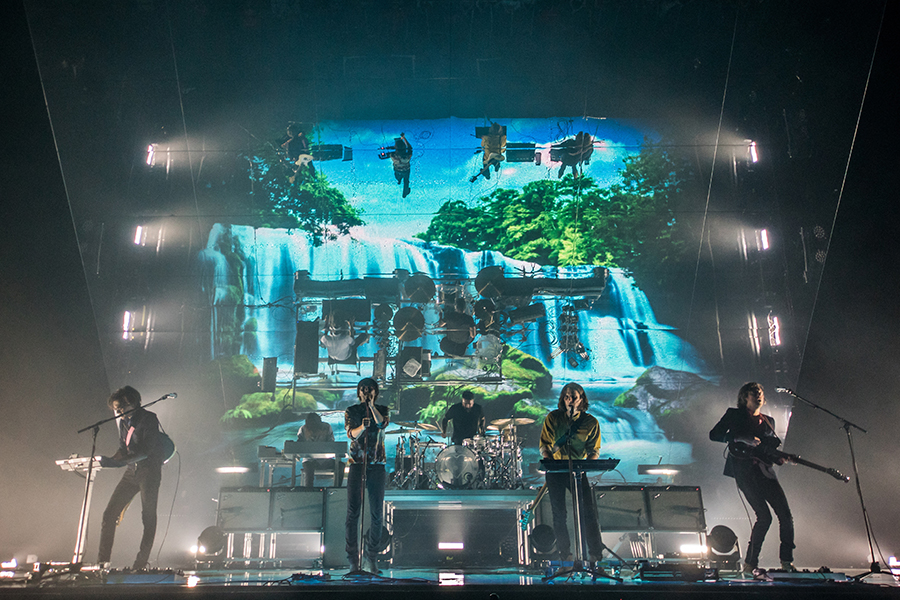 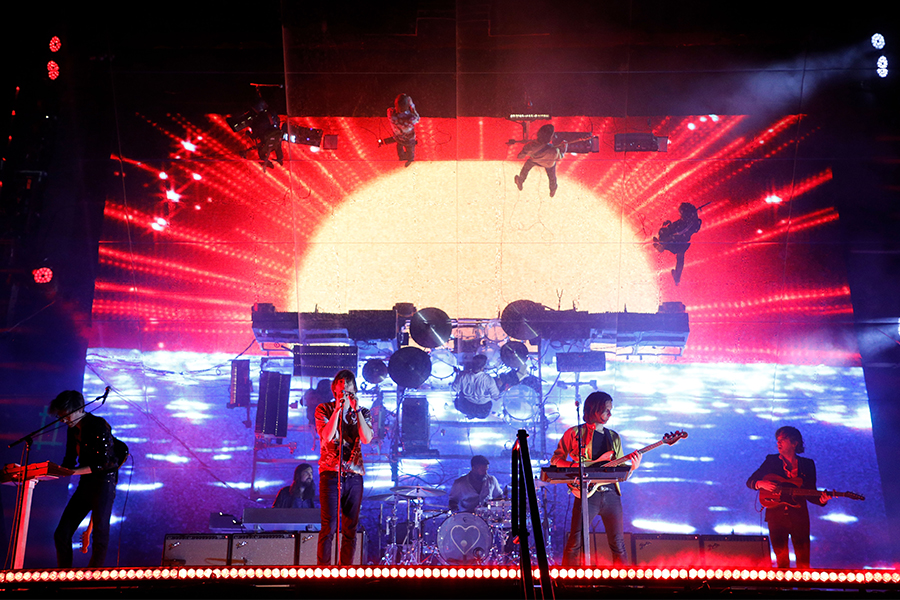 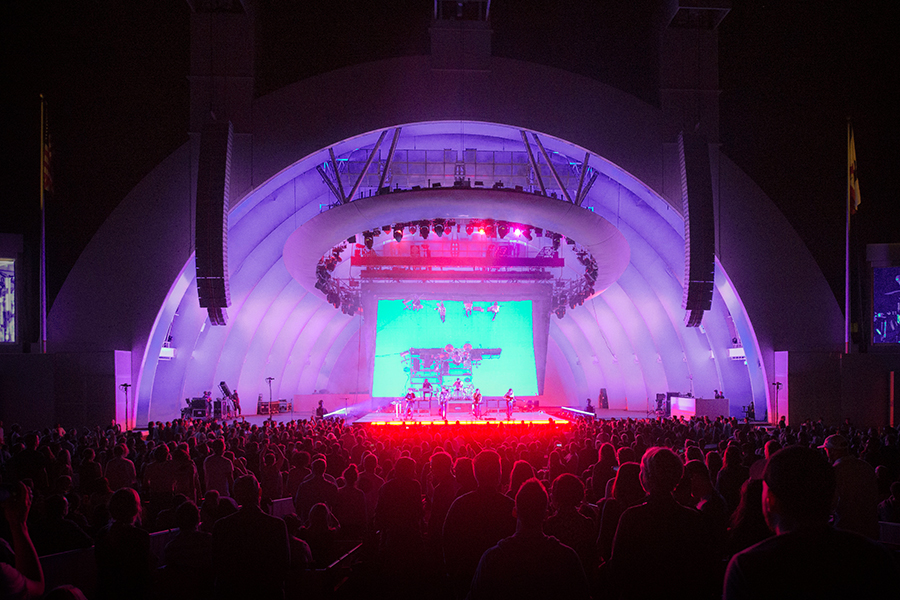 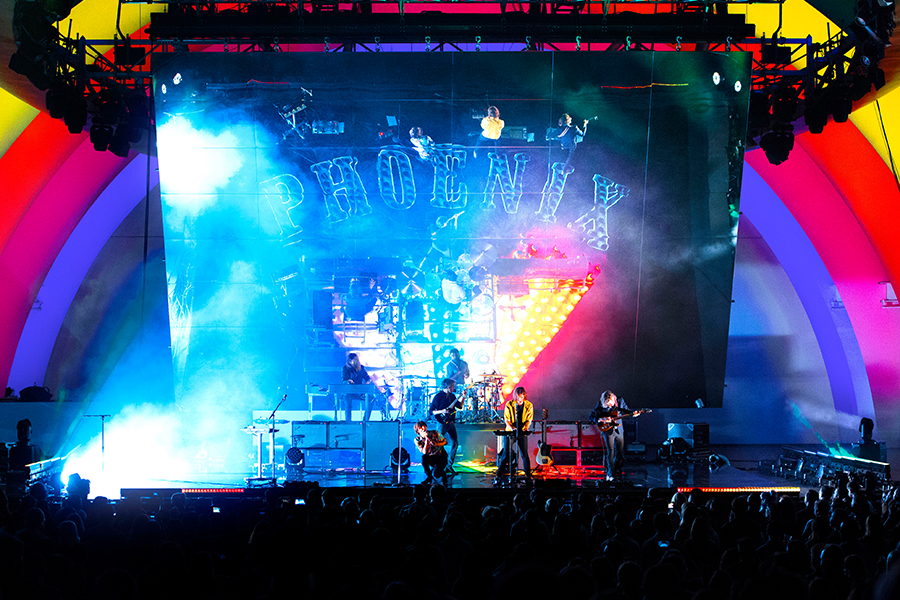 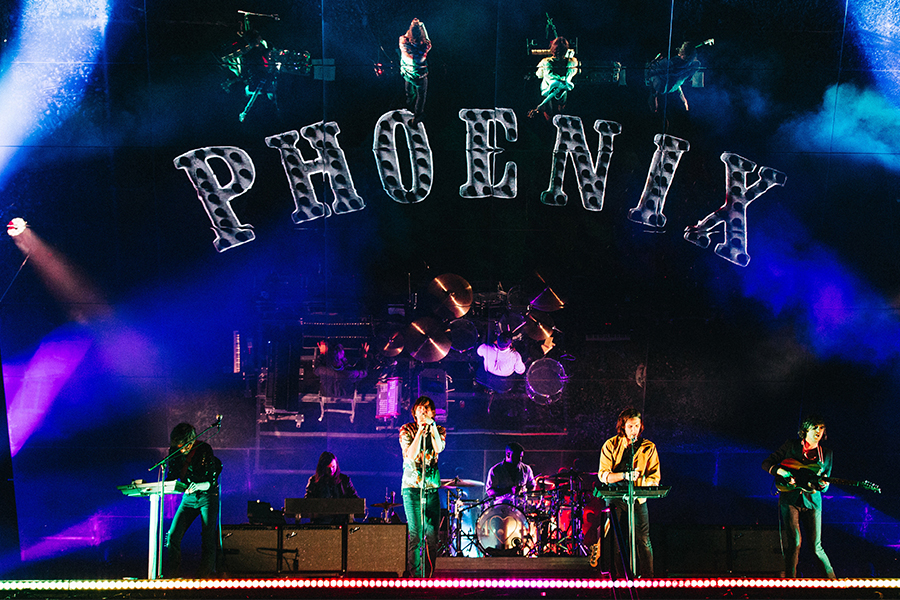 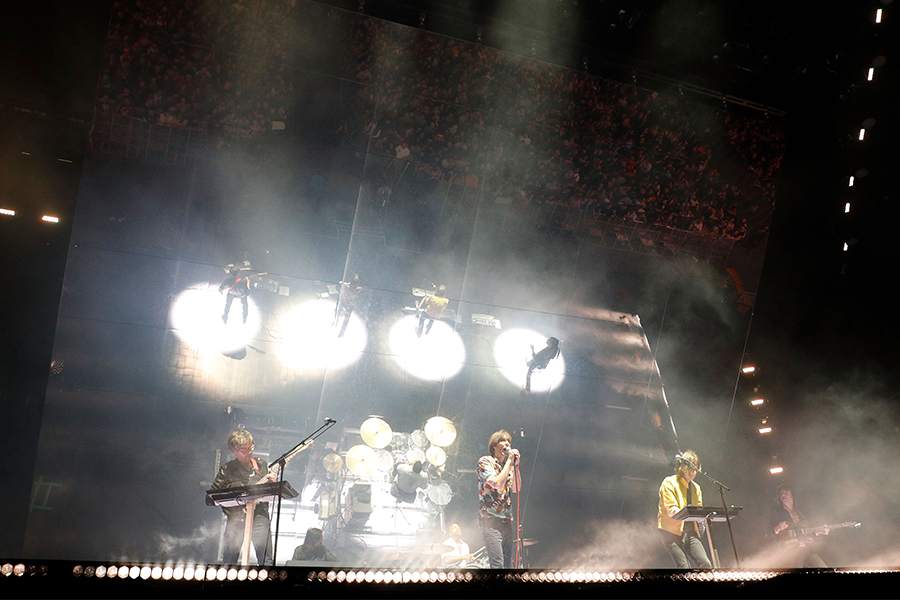 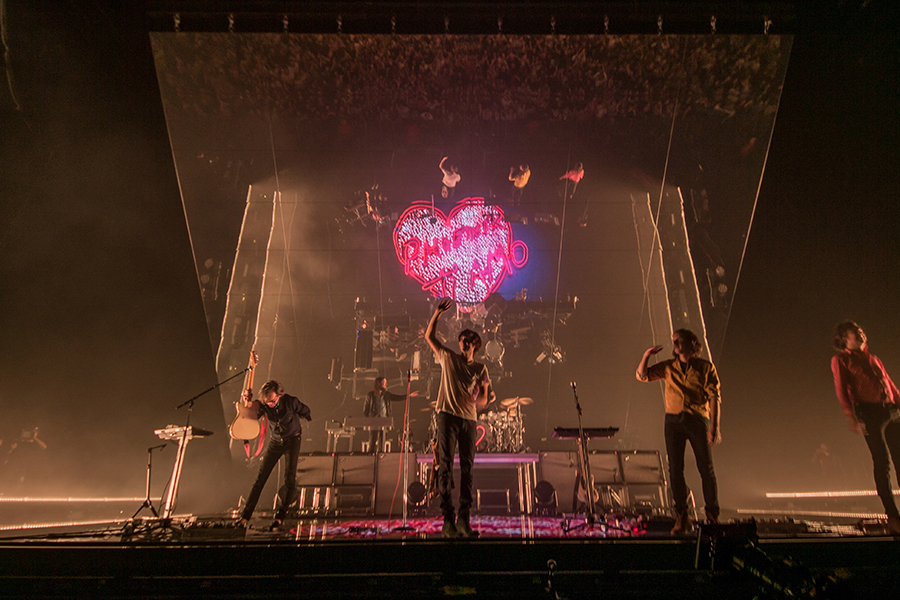 “This was firstly to achieve the brightness required, and then to reveal dimensions of height and depth with this new dynamic. If my techs and production manager had not stopped me from getting carried away, I would gladly have added hundreds of these fixtures!”

Programming on a grandMA2, he divided the Bars into two groups: the first to include zoom, tilt and shutter, the second assigned to pixel mapping and colors.

He confirmed that in achieving the brightness required to illuminate large stages he had been able “to combine volumetry and atmosphere, while at the same time being discreet.” This accuracy was important, he emphasized, in view of the inclined back mirror. “It meant that the audience would be able to see the stage and any technical defects not only from the front but also from above.”

“We wanted only the mirror to be elevated, so that no rigging or big fixtures could be seen on the floor. Thus, linear LED strips seemed the ideal solution.” 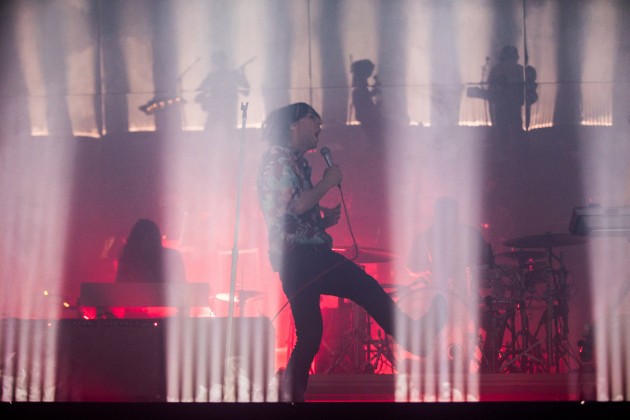 There are eight linear metres strips per side on custom rolling risers and a further 11 meters at the downstage edge that make the frame of the video floor. For arenas, the sides were doubled to create two different heights, and the 11 linear meters on the downstage edge were likewise doubled. “To this I added a line behind the band, then a fourth linear height on the front truss,” he explained. The Bars were used in single pixel mode.

“Thanks to the motorized tilt and zoom, such dimmer effects take on a whole new dimension, and this is the main reason why I like this product so much.”

“When the band speaks between songs, I only trigger the X4 side Bars, zoom open and CTO — the light spreads over the entire stage and it’s very elegant.”

The original idea of the 45° angled mirror came from a Parisian cabaret of the 30s and after much work, given the scale, came to fruition in production rehearsals in Miami. The band themselves were also heavily involved in the design process. “The mirror was suspended then oriented; we removed the protection, the video floor was lit, then the X4 Bars. The huge silence, the anxious eyes then gave way to smiles and we understood that we had created something unbelievable!”

Pierre Claude was formerly part of the Franz & Fritz lighting collective, and says “they were my mentors — they taught me that you can break the codes and conventions of lighting.” And this is precisely what he has done here.

The X4 Bars have helped inform that unique approach. “I made a note of them when I first saw them in Zürich, when I was touring with German band Boys Noize and this became my closest ally on the Phoenix tour. In spite of constant evolution, a Spot remains a Spot, a Wash a Wash, but with this range of GLP products we have reached another level, and the possibility of infinite creations.”

In conclusion, the LD says of the X4 Bars, “They combine everything I expected of a product, robustness, finesse and reliability and I immediately fell in love with them. The choice of modes is very clever according to the needs and the time we have to programme. In fact, I am obsessed by the creative possibilities these fixtures offer us. It has definitely become my favorite product of the last five years.” 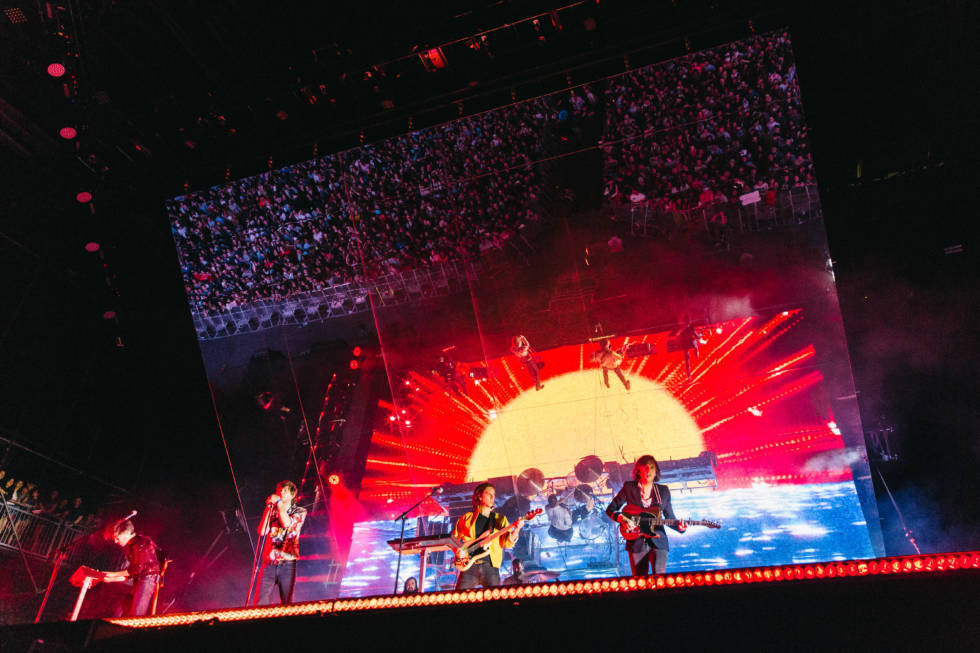