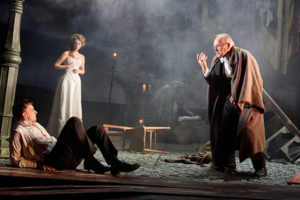 Stephen Daldry’s multi-award winning production of An Inspector Calls has returned to London’s West End. This now famous revival was first performed at the National Theatre in 1992 and has since won 19 major awards across the globe.

Lighting designer Rick Fisher has lit the production since its infancy and returns once again for this latest run at the Playhouse Theatre. He approached White Light to provide the lighting equipment, which included quantities of the GLP impression X4 Bar 20s which the company has recently invested in. 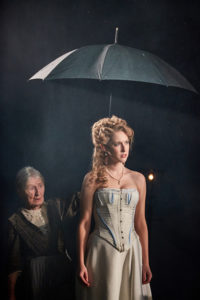 interrupted by the mysterious Inspector Goole who is investigating the death of a young woman. Rick comments: “What’s great about An Inspector Calls is that it’s still a brilliant production which resonates with a lot of audiences. Generation after generation have seen the piece and it seems to be as popular as ever.”

Since Rick first lit the show almost 25 years ago, there have been significant advancements in lighting technology, something he has incorporated into this production. “A lot of the lamps we used on the original rig have now become obsolete – the show has outlived the technology,” he observes. “For previous productions, we have always relied heavily on tungsten. Now LED technology is able to produce similar effects to tungsten lights yet does so using much less energy.”

The GLP impression X4 Bar 20 high performance batten is one of a number of upgrades and has a very specific purpose on An Inspector Calls. Incorporating 20 x 15W RGBW LEDs packed tightly to give a full line of light, the high quality optics ensure a smooth, homogenized output across the batten through a broad pallet of pastel and saturated colors. Offering full pixel mapping capabilities and 7°-50° zoom ratio it can operate as a narrow angle light curtain as effortlessly as a wide-angle washlight. 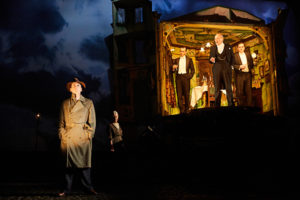 Of this production, Rick states, “The X4 Bar 20s are used to provide a particular rain effect – something that is vital in capturing the mood of the play. The actual staging area at the Playhouse Theatre is fairly limited, taken up significantly by the set. This essentially means there is less room to maneuver — but thanks to their flexibility, the X4 Bar 20s can achieve the exact effects required within that space.

“We have rigged the units vertically at the side of the stage; this means that the first view of the rain comes through this sidelight yet this won’t cause any spillage on the stage floor.” 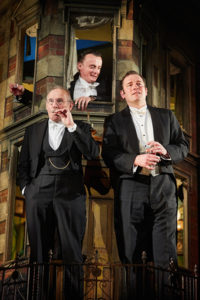 Rick Fisher is also using the Bars on RENT, which is currently embarking on its 20th anniversary tour before arriving in London’s West End next year at the St James Theatre.  He comments: “The Bars really are quite revolutionary, creating certain effects in both productions that simply wouldn’t have been feasible before. As a lighting designer, this allows you to be as creative as possible — which, in turn, hopefully provides the audience with an unforgettable experience.”

Dave Isherwood, WL’s Technical Director, adds, “At WL, we always ensure that we invest in the latest technology so that designers such as Rick receive the greatest amount of options. We immediately recognized the quality and versatility of the X4 Bars hence the reason we added them to our extensive inventory. They have already been used on a series of shows and we expect this to continue.”