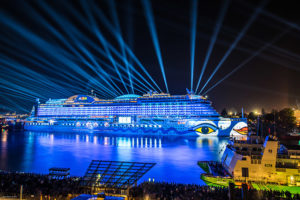 The luxury cruise ship of AIDAprima is the new flagship of AIDA Cruises, built by Mitsubishi Shipbuilding in Nagasaki, Japan to carry a maximum of 3,300 passengers.

Commissioned to design the lighting for the grand launch ceremony at the beginning of May, the technologically advanced onboard lighting was designed by Björn Hermann, and prominently featured among the fixtures were 50 of the new GT-1 hybrid light and no fewer than 342 x impression X4 Bar 20, GLP’s versatile and high performance battens.

The ship features a number of entertainment spaces including the Theatrium, with its amphitheater style bench seating, which offers lively production shows and cabaret, the Aida Bar and dancefloor, which also presents live bands and a separate discotheque. 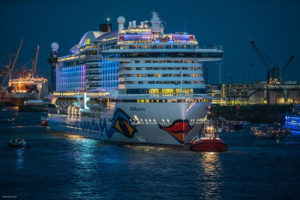 Björn Hermann was given a free hand with his lighting interpretation to bring the spaces to life. Working in close cooperation with phase7 founder and artistic director, Sven Sören Beyer, who had imagined the ship as a giant lighting matrix at original concept stage, the designer could instinctively see a major role for the X4 Bars.

“This was because Sven and I have both had a really positive experience with these fixtures over the past year,” he explained. The Bars were operated in single pixel mode, requiring 70 DMX universes and were described by Björn as “awesome products”.

The broad concept had been to create light sources to all levels of the ship from the center, with the overriding effect being the giant matrix formed from the 342 X4 Bar 20s. These were located in the balconies on custom made rain covers (that in the event were not required), transforming the AIDAprima into a giant 300-metre wide lo-res screen effect, on which graphics and messages could be represented. 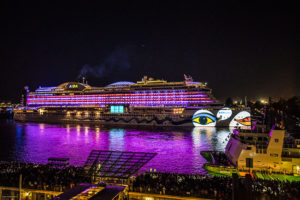 A 30 minute timecode lightshow followed the christening ceremony, which featured actress Emma Schweiger and the ship’s captain. At the mid-point of the show, the company Potsdamer Fireworks provided a spectacular display, creating a perfect interplay with the music and lights.

The LD stressed the importance of the X4 Bar 20 tilt function and zoom within the overall design strategy. “Principally, the lighting on the interior ceiling radiates across the entire balcony area, and with 342 fixtures creates an extremely powerful canvas,” he stated. “Secondly the X4 Bars act as a blinder effect towards the audience and were used with Sparkle effects and/or moving messages.

“Therefore, this single product alone offered three interesting and completely diverse effects which we have perfectly integrated into the 30-minute show.”

As for the GT-1 Björn Hermann placed 14 of the fixtures as a center effect in the AIDAprima Theatrium, with a further 12 units on the stern of the ship on six floors, each with two fixtures. Another 20 lamps placed on land color washed the entire ship with a carefully-keyed zoom, also delivering stroboscopic effects and gobo patterns. “Here, the GT-1 showed itself as a really good hybrid lamp,” said Björn.

Summing up, he confirmed that the GLP solutions had more than lived up to his expectations. “The X4 Bar in my opinion is an unrivaled product with unbeatable power, while the GT-1 fits easily and seamlessly in the chain of hybrid lamps.” 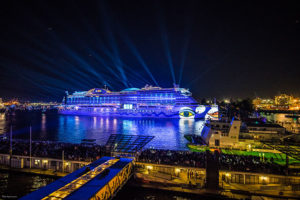 Designing, implementing and operating such a complex show out at sea had created its own problems, however. “Since the AIDA was busy with passengers, there was no way large rehearsals could be carried out in advance. The X4 Bars had to be installed during the journey while the passengers were occupied in their cabins. Fortunately in Rotterdam we were able to have a short dry run (and in those two hours we managed to fit the Beam lights with an iPad realign.”

“It was a huge challenge because we could never see the show in advance — and in my 20 years’ professional experience I’ve never had a job of this magnitude and without the opportunity for a test run.” Fortunately, all lighting design, programming and 3D visualization had been undertaken in advance at his Berlin studio using wysiwyg. 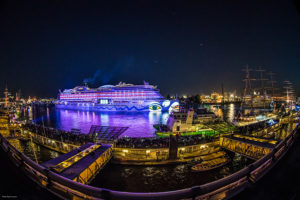 In terms of control several fully redundant control stations were set up using grandMA2 consoles (full-size) with master control on the AIDAprima. This used wireless (microwave) show control technology from shore to ship, under the supervision of Gerd Trapmann, with timecode transmission to all systems via UHF, fully backed up.

The entire integration was made possible thanks to a team of highly skilled professionals. These included lighting operator (effects lighting) Marc Brunkhardt and lighting operator (white light) Markus Ruhnke, while in charge of the network technology was Martin Mayer.

But the supreme effort, which tested everyone’s skills to the maximum, certainly paid dividends as Björn Hermann explained. “We received a massive thank you from the client at the end of it,” he declared.