Lighting designer Thomas Gerdon, from GERDON design, has recently taken several opportunities to use the new creative LED system Creative Light 1 Plus from GLP in various German TV productions—and has been extremely enthusiastic about its versatile application. 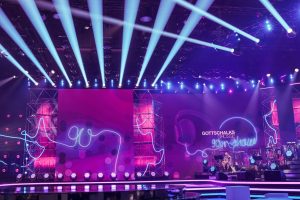 In the RTL game show ‘Du musst dich entscheiden’ (‘You have to decide’), working as lighting designer and lighting cameraman, he designed both the main set and a separate smaller set that was used for original soundtracks with the compact LED systems. “The small set was simply a less appealing conference room within the studio extension. The challenge was to turn it into a TV-compatible set—quickly and with a small budget that also looked like a show. We got around this by placing a couple of flight cases in the background and attaching the magnetic Creative Light 1 Plus to them. Light moods were set by remote control and everything was ready in five minutes,” said Gerdon.

The Creative Light 1 Plus was also used in the main set, but this time controlled by wireless DMX from the lighting desk. “The challenge here was that at the beginning of our work in the studio it was not yet 100% clear who would be walking up and down where; also which game would be included or which camera settings would be required. In such situations, a small, quickly installed lighting solution is worth its weight in gold,” he continued. 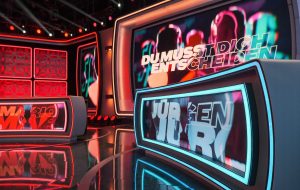 “In the first episode, for example, there was a large water tank whose entrance was not to be shown. In the end, it was decided differently. And suddenly you had a black steel ladder in the picture, which of course doesn’t look particularly good. Here, too, we affixed a few Creative Lights and literally gained a lot of the desired look in no time. You can really highlight every dark corner… each nook and cranny. “

The eternal show master Thomas Gottschalk looked back musically on the ‘90s on ZDF. Here, too, LD Thomas Gerdon found a creative, and extremely helpful application for the compact, battery-operated LED systems.

The set contained 48 plexiglass seating cubes that were to be illuminated. So Gerdon and his team put a Creative Light 1 under each cube and enjoyed 48 wonderfully glowing cubes after just 10 minutes—all wirelessly.

“Here we needed a very decent light output because the plexiglass is relatively milky and translucent, and absorbs a lot of light. For this reason we operated the Creative Lights in high-power mode—to get something substantial out of it. The battery life is also great. In any case, in all of our applications, all devices lasted the entire shooting time. “

ZDF celebrated ‘50 years of the ZDF hit parade’ with presenter Thomas Gottschalk and his guests. Here, too, Thomas Gerdon and his team were responsible for the lighting design—and used GLP’s Creative Lights as an all-purpose tool in the set.

“Among other things, we filled in gaps that arose from the lack of an audience, as the set is from the time before the pandemic,” explained Gerdon. So Creative Lights were distributed in the stands and around a small satellite stage that was to hang in the ‘vacuum’ created by the lack of audience. 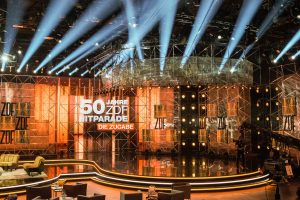 “We also had several small tables in the set, for which the designer had selected beautiful table lamps, but which came with Schuko plugs. In an exhibition hall with a concrete floor, where you can’t hide anything, this was not exactly my first choice as a designer,” said Gerdon. “So we unscrewed the actual glass of the lamp, put Creative Lights in it, wrapped some frost film around it and just built battery-operated, wireless DMX controlled table lamps.”

Speaking of the possible uses of the new, creative LED system, the designer said: “We used them purely as decorative lights in all our applications. Since you can really do a lot with it, I think it’s not bad to have 30-40 of them with you every now and then. From my point of view, there is a use for the Creative Light 1 Plus in every production without exception. Even if you are on a small tour without your own light, you can create a nice basic supply on stage with 24 Creative Lights. They are really great little adjuncts that offer an incredible number of options and can be attached anywhere very quickly. “ 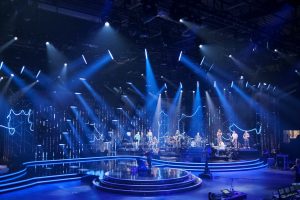 Creative Light 1 and Creative Light 1 Plus are battery-operated, completely wireless creative LED systems from GLP for maximum flexibility in an almost unlimited variety of applications. With 24 individually addressable RGB pixels, the Creative Light 1 system offers countless design options. Whether all pixels are controlled together, individually via pixel map or via the integrated double layer FX engine—the visual effects are impressive.

The integrated high-performance battery offers enormous power with 10,000 mAh, and selectable power modes ensure long-lasting performance of up to 24 hours. Whether garden parties, gala events, theatre, cabaret, TV studio or large festival stages, the Creative Light 1 impresses with enormous flexibility, minimal space requirements, space-saving transport and easy storage. Thanks to the extremely fast set-up and minimal effort in configuration the Creative Light 1 system is perfect for bands, events and anywhere that a fast and flexible solution are required.