“Two of the Ally Pally shows were rescheduled from last year, and then a third date was added,” he explains. “We also did shows in Manchester, Glasgow, and Belfast, and a couple of festivals.” 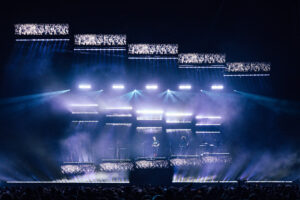 Returning to the same winning combination he had taken out with the artist when they first started working together three years ago, the GLP fixtures again formed the “absolute core” of a rig that was embellished for Ally Pally, Pritchard-Smith says. Working alongside creative director Richard Sloan and producer Peter Abbott, he adds that he set out to design a show that could be “fractured and unsettling but also perfect and beautiful.”

The decision to eliminate video content from the show had created a void that needed filling – and so he turned to the X4 Bars to create staggered pods doubling as an alternative for an upstage LED wall. “The hard lines and edges of the X4 Bar pods, juxtaposed with their ability to create soft and even color gradients, allowed for an extremely varied show,” he explains. 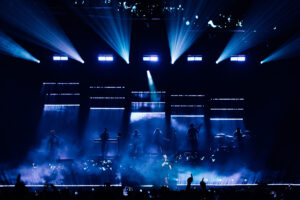 “The versatility of the Bars provided a wide range of looks, from narrowing Dermot down in glitching beams to full stage-wide effects. Zooming the Bars right out also gave them the opportunity to become ‘content’, using pixel specific looks and effects to reinforce the music.”

He did this by deploying 45 X4 Bar 20 and 18 JDC1 for general touring, rising to 87 X4 Bar 20 and 40 JDC1 for the Ally Pally shows and expanded touring package. The bulk of the Bar 20s were used in the pods for the animation and effects, with a couple detailed for back, side, and foot lights around Dermot in some of his positions. The JDC1s were used as a combination of back wash and blinders, providing base colors and strobe effects. 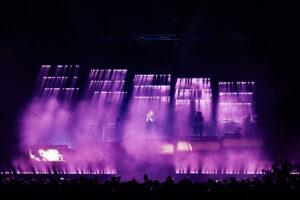 Owen Pritchard-Smith has specified GLP fixtures pretty much since starting out. “They always have great functionality, are built well for touring and provide incredible color and output,” he acknowledges. “Due to their understanding of designers and technology, GLP consistently sets the benchmark for creative lighting fixtures.”

In addition to his role as designer, Pritchard-Smith has been doubling as programmer and board operator (on a full-size grandMA3). Matt Kemp from Quantum Creative assisted with pre-programming and incorporating the Ally Pally additions into the touring show. While the X4 Bar 20s are all single pixel control, the JDC1 is used “more for its excellent wash and strobe functionality,” states the designer. “Therefore, I keep them in a basic mode. Lay-outs and good housekeeping are essential for a rig of pixels! 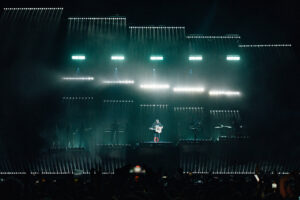 “[T]hey are very fun to program. I had quite a few interesting stacks going on to create the desired effects, but the X4 Bars managed it easily; their fast tilt allows for very quick marks.”

Once again Owen Pritchard-Smith turned to Christie Lites as his preferred vendor. “I always use Christie Lites where possible; their passion and commitment to the end product is unmatched, and they always strive to ensure the inventory keeps up with the evolving needs of designers,” he comments. He had a special word of praise for [Christie Lites’] Andy Strachan: “He was incredible from day one. We went through a fair few versions of this design and he was there to support and advise throughout. Christie helped to design and fabricate the pod rigging system for us too, which took a load off my hands and really helped achieve the look.”