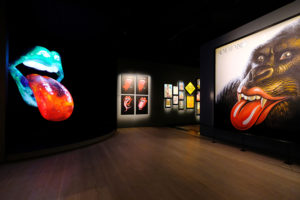 The most highly tipped rock ‘n’ roll exhibition of all time — the Rolling Stones’ Exhibitionism at the Saatchi Gallery in London — uses technology on a grand scale to create the realism of the band’s early history, and enhance the visitor experience through seven separate zones.

Produced and curated by Australian event company IEC (International Entertainment Consulting), the lighting design has been created by another major event company, Woodroffe Bassett Design (WBD). They, in turn, have specified a number of LED fixtures from GLP, who are the nominated exclusive automated lighting partner.

The inventory was supplied and installed through partners White Light, under the project management of Simon Needle. This included 25 GLP impression X4, each featuring 19 high output RGBW LEDs, along with six of the new X4 Bar 20 high performance battens. All appear in the ‘Performance’ gallery where visitors are magically ‘transported’ from a backstage area onto stage (as if a member of the band) before being ‘returned’ to 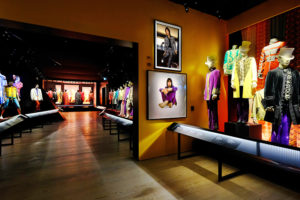 the audience. In addition, GLP Inc in North America also supplied nine Fusion LED RGB fixed beam battens from Scenex Lighting, for whom they are distributors, and these are located in the ‘Style’ section of the show. 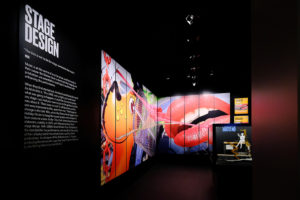 As the band’s long-term lighting designer and show director, Patrick Woodroffe says that the idea of a full-blown exhibition had been discussed regularly over the past 20 years. “It has gone through many iterations but this particular concept was the first that seemed to have the necessary weight and commitment, and we started work on it two years ago. WBD were asked by the producers to light the show at the same time that I was helping to curate the content.”

When conceiving the show dynamics, WBD’s thinking was shaped by the fact that the attraction would be mounted on a giant scale and have to tour for long periods. “In the end we chose to buy a lot of the equipment rather than rent locally, as much of the installation is custom,” continues Woodroffe. “This also enabled us to specify exactly the fixtures that we required. “We wanted to have a dynamic lighting element in the final ‘Performance’ gallery and so started to look at the idea of a small LED moving light.”

The fixtures come into their own during the audience ‘transportation’ in the Performance area where they are used in two different ways: the first is to create an atmosphere in the space where the audience walks in from the moody backstage set. As they leave that area and walk onto the stage itself slow moving pools of blue light drift around the space, enhancing the impression that they are actually on the stage, waiting for the performance to begin. Moments later the lights fade and the first 3D image appears in front of them on the screen. 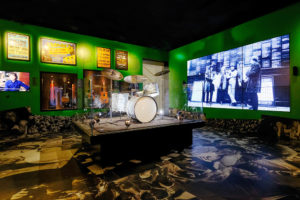 “Throughout the film the lights copy the colors and effects that are taking place on the screen to give a totally immersive and dramatic experience,” Patrick Woodroffe explains. “The X4 is used very much as a show element while the 3D film is being displayed — but it is also used as a technical fixture set ‘On Test’ in the backstage area. This lends real authenticity to the exhibit.”

White Light were awarded the installation contract having originally been approached by IEC in September last year. Paying credit, Patrick Woodroffe says, “They have done a terrific job in what has been a challenging and complicated installation.”

Taking up the story, Simon Needle added, “We were working with GLP products for the first time and found them ideal for the exhibition as they are the only ones we know of that can cope with changing voltages.” 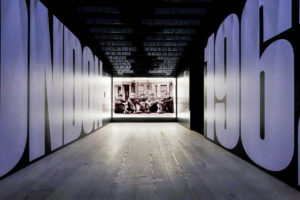 Of the challenges faced, he said, “As an art gallery, with an extremely low roof, the space was quite difficult to work in. There were also logistic issues with kit delivery which necessitated working closely with Saatchi to ensure that we weren’t disturbing their neighbors. There is also extremely limited power, which can be a problem with an exhibition like this, so to overcome this, we used as much LED lighting as possible.”

Supporting the show for GLP was Mark Ravenhill, who has worked extensively with Patrick Woodroffe over the years. “Mark was positive and proactive but more to the point he made us confident about the challenges of taking this equipment out on the road for three years without a dedicated moving light technician,” states the designer. “He also gave us confidence that we would have the support of GLP within the different territories, as we travelled around the globe.”

While Patrick himself worked with John Coman to light the Performance area, his co-director, Adam Bassett, took the lead on the lighting of the exhibition, assisted by Coman and Miriam Bull.

Each gallery has its own lighting control DMX playback unit. Most galleries have a very simple set of cues, the exceptions being the screening room in the Film gallery and Performance. Here the environment reacts to contact closures provided by Electrosonic that allow the lighting to respond to the start and end of the film. 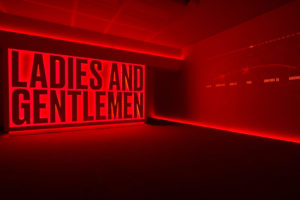 Lighting in the ‘Performance’ gallery is run off a GrandMA PCcommand wing, which receives timecode signal from the Electrosonic device. It is via this timecode that the live element is synchronized with the video playback.

Summing up, Patrick Woodroffe praised Ki McGinity and the team from IEC Exhibitions “who made the whole thing happen.” He said, “This was a hugely challenging but ultimately rewarding project for everyone involved; a strong creative team with the support of a generous and imaginative producer and the input from the Rolling Stones themselves at every step resulted in a technically superb but also emotionally connected experience for everyone who will see it.”

After the London exhibition ends on September 4, the giant production will tour another 11 global cities over the next four years.