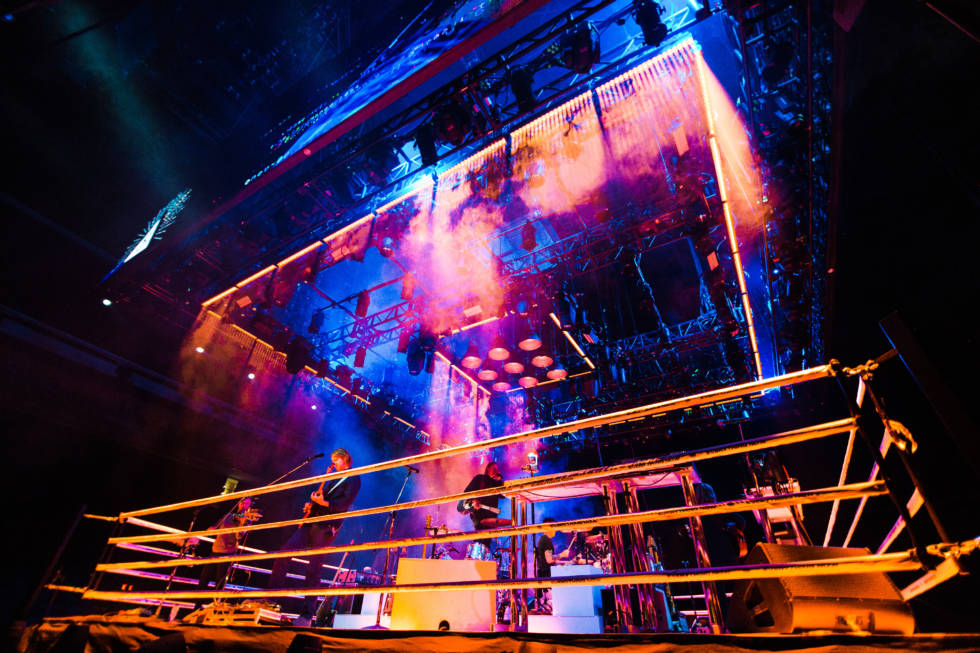 After spending the early part of the summer on the European circuit, Canadian band Arcade Fire have embarked on the first leg of their lengthy North American ‘Infinite Content’ tour to coincide with the release of their new album, Everything Now. This kicked off last month in the band’s hometown of Montreal.

Operating the lighting on tour has been Chris Bushell, working under the creative direction of Tarik Mikou from the Canadian production company Moment Factory.

Having been LD for the band back on 2014’s Reflektor tour in Bushell was delighted to be invited back, and became closely involved throughout the development of the show design, which incorporates a larger number of fixtures from GLP.

To promote the new album, the band had wanted to play in-the-round with a strong sporting event feel — based around a live, visceral video and lighting production that formed the scenography over and around the boxing ring stage. “Lighting wise, we wanted to be able to create structural walls and cages of light,” Bushell explained. “This, arranged around an even grid of more vintage tungsten lighting, was to blend in within a large four-sided ‘Jumbotron’ to form a single solid piece above the stage.”

Lighting vendor for the North America leg has been PRG Las Vegas — and supply has included quantities of GLP’s award-winning X4 Bar 20s and Bar 10s, and the new JDC1 hybrid strobe. “Support has been fantastic as always,” says the designer. Of his background working with GLP tools, he reveals, “I have used [GLP’s] X4 lensed fixtures previously — they are rich, bright and focussed, enabling them to complement whatever they’re mixed with.

“I also used the X4 Bar 20’s with James Blake so was aware of the unique presence they create. Although I was a big fan of the old Digital Light Curtains, they became harder to locate among touring vendors — so I was delighted when a comparable LED version finally arrived.”

Chris Bushell had also used the X4 Bars on Arcade Fire’s festival run during the summer to great effect and so he was determined to maintain continuity with this aesthetic, within the subsequent arena design.

As for the JDC1’s, this had been his first experience. “But PRG helped in my choice. I wanted a strong LED moving wash in the rig over the stage, but was after something different in functionality, rather than just eye-candy effects. This lighting design is very much embedding the fixtures into the set and making more of their output so the JDC1 fitted the bill as it also incorporated the mega strobe functions. This was extremely helpful with space above the rig above at such a premium.”

Here, 20 JDC1 fixtures are used as overhead flood and strobe fixtures, with a further six facing upwards within the video piece to create an aura within and above the solid ‘Jumbotron’. An additional eight JDC1’s are set in the automated towers outside the stage area to light and silhouette the stage set from the perimeter.

“The ability to use such a subtle dimmer curve on their color plate is pretty unique in LED strobe fixtures”, praises the LD.

Meanwhile, the X4 Bar 20’s (and a couple of Bar 10’s) are used to create solid light curtains that surround the stage and central riser, giving the appearance of a physical box of light. “With the added rain effect, it creates a unique atmosphere,” he says.

Summing up the impact of the JDC1’s, Chris Bushell declares, “ LED strobes are normally an utter disappointment, but these get the distressing electronic/chemical flicker right and serve as a viable and more versatile alternative to conventional strobes.

“In fact, I asked Avolites to separate the fixture personalities for the JDC1’s so I have a separate strobe with tilt, strobing color plate and flood — which is a big help with my ageing mind and archaic programming style!”

He describes both GLP’s JDC1 strobe hybrid and X4 Bar 20/10’s as “definite game changers.” Qualifying this, he says, “There’s a new gimmicky LED or beam fixture released more often than the latest smartphones. Mostly they’re useless eye-candy guff — but both of these [GLP fixtures] fill a very definite need. The X4 Bars in particular fill the void that the old untourable Digital Light Curtain left me, so I am certain to be using them again in the future.”

All show programming on the Infinite Content tour has been undertaken under the creative direction of Tarik Mikou and the Moment Factory team; this includes video, automation programming and the lighting design, developed in close collaboration with Chris Bushell.