At the beginning of April, the classic German TV series Verstehen Sie Spaß (which translates as ‘Do You Understand Fun?’) entered a new season, with the moderator duties transferring from the long-serving Guido Cantz to Barbara Schöneberger, and the entire production moving from its familiar Munich location to the Berlin studio.

Lighting designer Thomas Gerdon, who has been responsible for lighting the show for many years, took the opportunity to update the lighting concept on behalf of Kimmig Entertainment GmbH to include over 250 GLP spots. While GERDON design GmbH adapted the lighting and content design for the show’s acts, the light and content design for the Beatrice Egli Show – which was produced directly afterwards in a modified set – was forged completely from its Wiesbaden design studio. 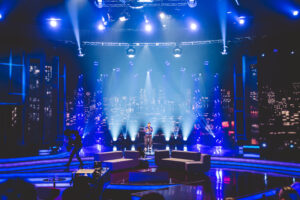 Several challenges had to be overcome with this combined production. On the one hand, the TV classic Verstehen Sie Spaß needed to look fresh but still offer a high recognition value for the viewers. On the other, the two shows, produced back-to-back, made very different demands on the lighting. 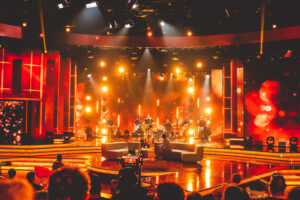 “A Saturday evening entertainment show with a high proportion of talk like Verstehen Sie Spaß, followed by a typical music show featuring multiple acts, had to be treated fundamentally differently,” says Thomas Gerdon. “However, we didn’t have time for several days’ rebuild, so I developed a hybrid concept that met the specific needs of both productions.”

This concept resulted in two individual stage designs for the two shows. The talk corner of both formats was designed to its usual high standard, while the show stage(s) were equipped for the most diverse possible use. A mix of spots and washlights provided the basic production lighting. A wealth of variable elements on towers or on roller boards provided the necessary variety, especially in the Beatrice Egli Show, which had two show stages at its disposal. 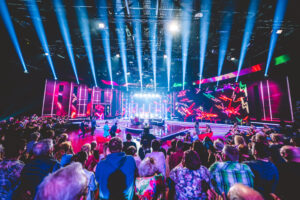 “In this, it was the individual pieces that we were constantly able to arrange differently, which made it possible for each artist to have a completely different look,” adds Gerdon.

The 17 HIGHLANDER Wash were exclusively responsible for the personal lighting. “With a really good wash light like the HIGHLANDER, which combines a high CRI with sufficient power and aperture options, you can be super-precise,” says Gerdon. “And thanks to its power, this can be done right across the board. I’m definitely a fan of this washlight.”

Another must-have in this instance was the 42 compact GT-1 beamlights, as Thomas Gerdon explains: “The permanently fixed component of the Verstehen Sie Spaß set is a ceiling plafond with embedded beam lights. Here we chose the GT-1 primarily because of its high brightness. Since the lamp has no base, it also looks very good in this setting.” 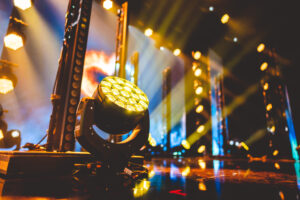 On the other hand, Gerdon requisitioned 12 of the brand-new GLP impression X5 washlights for the first time, which served as effects during various moments in the show. “The X5 is brighter than the previous model, but that’s not a criticism,” he explains. “The zoom is very, very fast, which of course is pretty cool. But what really impresses is the light quality of the new X5. It’s fantastic – in the white area as well as in the colors. The quality of the colors and the white light is definitely unparalleled in its class and product range.”

The X4 Bar 20, X4, and X4 L are already among the standard workhorses in Gerdon’s GLP box of tricks. “With the 48 X4 Bars, we illuminated several large areas on which foil prints indicating light reflections were laminated. We noticed that these prints come out differently depending on the color temperature and then sometimes appear as if they are glowing themselves, which looked great.” 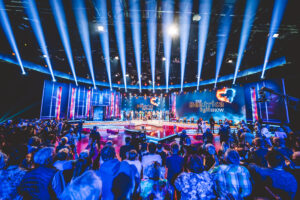 The 64 LED FUSION Stick FS16 Z and the 31 JDC1 hybrid strobes contributed to a large section of the show’s effects lighting, the JDC1 providing effects lighting on both show stages (on the floor and in the trusses). “As schlager music becomes more modern and electronic, the JDC1’s versatility and punch make it a very welcome solution when it comes to creating 18 schlager titles with different looks,” Gerdon concludes.

“We used the FUSION FS16 Z on the one hand as a fixed part of the show light on the stage, while other sticks were installed in various arrangements on the title decoration towers or could be used behind the audience as spotlights. For me, the FS16 Z is a great example of what constitutes the quality of GLP as a manufacturer: they listen carefully, ask the right questions, and then deliver a product that simply offers everything you would expect from such a TV studio lamp. This cannot be done any better.”