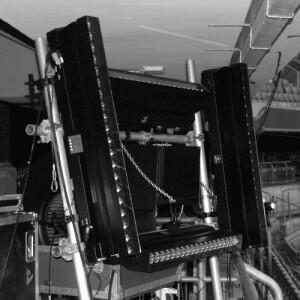 After around two months of preparation, Munich Allianz Arena hosted one of the largest corporate events that the impressive stadium, situated in the north of the Bavarian capital, is likely to have seen in its ten-year history.

Under the guidance of Creative Director Markus Katterle and lighting designer Jens Hillenkötter, the professionals of Flash Art and Exponauts put together an extraordinary event. In addition to extensive media and laser technology, on the lighting side Katterle and Hillenkötter specified more than 140 moving and static lights, including 16 brand new impression X4 Bars from GLP.

Hillenkötter specified 16 of these battens, with integrated tilt and zoom features. “The X4 Bars are incredibly flexible,” he concluded after the first use of the products, with a choice of either 10 or 20 high power RGBW LED, a zoom of 7 to 50 degrees and a tilt of 210 degrees in maximum 1.5 seconds.

“The zoom is fantastic,” Hillenkötter went on, promising to specify the X4 Bars for future events. “They now belong firmly in my permanent toolbox, and I can visualize these lamps being used in a matrix formation,” he said, revealing one of his creative ideas for forthcoming use. “Then we will definitely need more than 16 of them as they become more freely available.”