The highly sensitive and lyrically complex songs of Laura Marling, performing solo on a plaintive acoustic guitar, brings with it demands for a special kind of lighting. Showcasing her latest album, the Grammy- and Mercury-nominated Song for Our Daughter, her recent three-week sold-out club and theatre tour – her first in four and a half years – was highlighted by two nights at London’s Roundhouse. 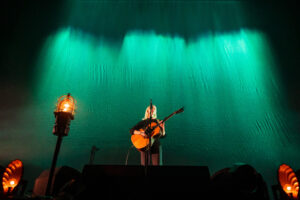 Marling’s long-term LD, Jon Barker, recently formed a collaboration with fellow designer and long-term colleague, Dom Smith, with the pair now operating under the name NeonBlack. Their mission: to tell the story of the artist through light.

Since this was also a low-production tour, they were able to achieve most of their objectives by deploying 16 of GLP’s award-winning impression X4 Bar 20 battens.

Smith recalled that the minimalist approach is something the two men are fast gaining a reputation for, since they also recently completed a tour with solo artist Ben Howard. 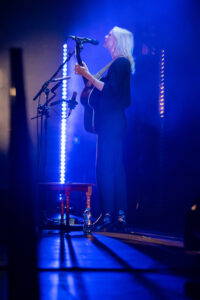 This time around, the rig needed to suit Academy-sized venues where the lighting needed to be nimble and designed around a floor-based package, but at the same time sufficiently able to perform a variety of functions on the larger stage of the 3,000-capacity Roundhouse.

As Dom Smith points out: “There were logistical considerations, but in any case, a minimalist, floor-based, side-lit approach was what most suited the show. This was not a big-budget tour, and what we designed was something beautiful yet practical.”

A continuous overhead strip of eight X4 Bar 20s – flown on a mid-stage truss, in conjunction with a sharkstooth-gauze kabuki system – provided the only element of flown lighting, with others on pipes as part of the floor package. 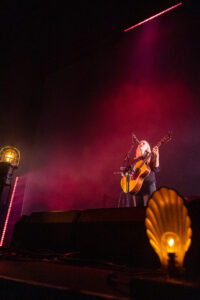 The set was split into three acts, and fittingly the first, called ‘Curtains of Light’, is where the X4 Bar 20s really came into their own. As Dom Smith explains: “This was the main focus. We were looking to create curtains… a linear output, with the midstage drape lit from the X4 Bars.” 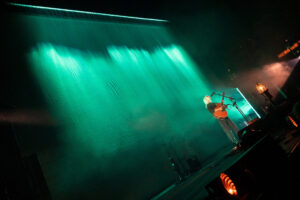 Jon Barker, who had earlier worked on Laura Marling’s side project, Lump, with Tuung’s Mike Lindsay, said that the artist herself had strong ideas about the looks she was after: “Every music artist has a story to tell and our job is to help do that; during the design process Laura provided us with some strong visual references as a fantastic starting point.”

And he is convinced that by using the X4 Bar 20 comprehensively, they succeeded in telling that story, running them in single-pixel mode, largely to create gradients of color intensity, using the zoom and focus. “In fact, we did a lot of work with intensity and color gradients to break up the vertical linear and horizontal looks,” adds Barker. Later, this became more angular, with wash looks and split color. “We used the tilt function to focus the Bar 20s onto the mid-stage drape to create an abstract textured effect, flickering each cell individually, making it different from using a standard cyc light.” 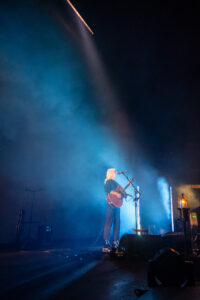 Reflecting on the work, the two designers say: “Laura is an incredible talent and an absolute delight to work with. Since it’s a solo show, it could have been easy to overdo the production, so our aim was to create some complementary scenic and lighting elements and not take the focus away from Laura.”