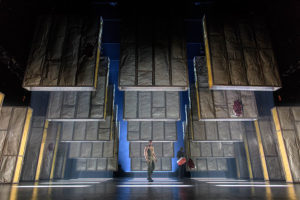 Creating a concept to sculpt the air with light, Tony and Olivier award-winning lighting designer Neil Austin has drawn on the work of early visionaries Adolphe Appia, Gordon Craig and the more recent Josef Svoboda to deliver his fractured, abstract and constantly changing masterpiece for the Jack Thorne adaptation of Woyzeck at the Old Vic.

He connected their vision with the versatile delivery of GLP’s X4 Bars, which have been his main weapon on this production, stating, “These Bars would have made Appia very happy, and all three of them would have loved to be able to use something like this when they were

around. For me this was the only fixture that could have done the job.”

The X4 Bars are a unique development of the conventional light batten which permits the 20 tightly packed 15W LEDs to function variously as a narrow angle light curtain or a wide angle washlight.

To these he added half a dozen of GLP’s incredibly powerful X4 XL moving heads (the output derived from 55 x 15 RGBW LEDs). “The XLs are everything I always wanted a 5K and scroller to be, but the latter always disappointed — they are a fat beamed source with a similarly wide aperture to a 5k, but with fantastically bright output — and yet they take up minimal real estate in the air.” 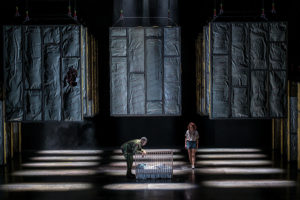 Within the Old Vic stage set space is at a premium, and the majority of the lights are thus concealed within Tom Scutt’s set. With drops that suggest large oblong walls and panels, the size of double beds, sliding in and out and up and down on wires, the interaction of cold color firing accurate shafts of lights through the slatted props and midair haze becomes crucial as Woyzeck’s decline into madness accelerates.

Written by Georg Büchner in the 1830s (and left unfinished) in this new take, under the auspices of Bayliss director, Joe Murphy, the story relocates to 1981 Berlin, where the British army guards against Soviet invasion, In this Cold War atmosphere traumatized soldier Frank Woyzeck struggles to support his Irish Catholic mistress, and their baby as he slowly unravels towards madness with brutal intensity. 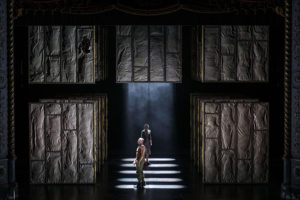 The lighting from within the base of the wall panels creates the sense of a prison in which Woyzeck finds himself metaphorically trapped. And as he becomes ever more isolated the lighting helps create deep shadow contrasts on the stage.

Neil Austin knew from the start that GLP battens would be essential to add creative abstraction to the house generics, favoring cold colors to depict the bleakness of the constantly changing set, and maintaining a sense of foreboding throughout. 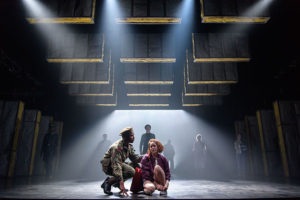 “It’s quite a problematic piece portraying Woyzeck’s change into delusion and decline” says the LD, who was invited by Murphy to light the production, having worked with him previously.

His complement of 30 X4 Bar 20’s had to be provided part by White Light and part by SLX, owing to the enormous industry demand for these fixtures. GLP themselves added a further 12 of the smaller X4 Bar 10’s, which were stationed in the far upstage dock, and the six X4 XL.

“With 25 portions of wall (in 5 x 5) sliding up in different formats to create different scenes, the few lights I was able to use needed to be small and extremely versatile,” he rationalized. “Having previously used 100 Bars on Harry Potter and the Cursed Child I knew this would probably be the only light that would work.”

While the Bar 10’s project long shafts of light to carve up the stage space, the X4 Bar 20s punctuate the 15 flying, half-finished walls, 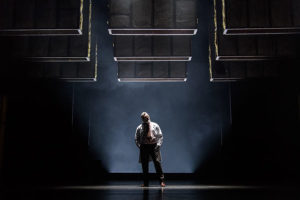 drawing stripes of light on the floor as Woyzeck progressively descends into madness. “Again this is the only fixture that would have produced the tight narrow shaft I wanted, within the tiny footprint available.” These 30 fixtures are recessed into the walls (two per wall) and at various stages also produce a curtain, while the powerful X4 XLs are used to ‘sculpt’ the chains hanging above the walls using back light — these were also featured by Austin on the Harry Potter production. 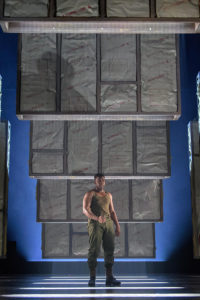 GLP’s color rendering is also excellent and Neil Austin observed how bright they were at the cold end of the color spectrum. “Open whites and cold blues dominate the show. In fact, all the major moments are delivered by the X4 Bars, with the entire space defined by the beautiful dynamic light that they are so good at delivering.”

The cues are piloted from the house ETC Gio desk. “We were using the Bars in dual pixel high-resolution mode because there weren’t sufficient channels to use them individually. This gave us just enough to graduate the edges very gently to create a more ethereal effect.”

Neil Austin also praised the support of Old Vic’s Head of Electrics, Miriam Spencer —another big fan of the X4 Bars — and programmer, Eden Thornton. “As far as I’m aware there is no other fixture, currently 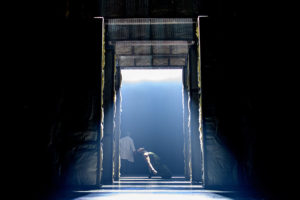 available, that can match these on functionality, performance and compact design,” said Spencer. “Neil has a great deal of knowledge and experience with these fixtures and knew from the outset that they were the perfect tool for the job.

“As scenes shifted from a tight claustrophobic feel to a vast, almost, empty stage, the Bars enabled Neil to create broad striking looks alongside tight pinpoint back light and stylized effects. To be able to achieve so much with one compact fixture type is remarkable.

“Our creative team is also excited, and understanding and experiencing how versatile these units are will definitely help offer solutions for future productions.”

With thanks to Adam Hughes at White Light