One of the accepted technical challenges of London’s outdoor theatre season are the major productions at Regent’s Park Open Air Theatre, which run right through the summer.

GLP’s award-winning impression X4 Bar 20 battens have been put to many creative uses since their launch and Clark managed to extend the envelope further, assigning different roles to the 24 fixtures supplied from White Light’s inventory. He also road tested the new FUSION Stick 10 fixtures, from GLP’s latest addition to the brand family, FUSION by GLP. While giant impression X4 XL RGBW heads took the place of follow spots in what was generally a very monochromatic design, punctuated by cold ice blues to mimic the Argentinian flag.

Tim Rice and Andrew Lloyd Webber’s iconic musical of course tells the story of Eva Peron, from a life of poverty to spiritual leader of the nation, but here Jamie Lloyd had applied a contemporary twist.

Jon Clark and set designer Soutra Gilmour have collaborated regularly with the director over the past decade, and since Clark also lit Into The Woods at the Open Air Theatre in 2010 as well as the opera The Turn of The Screw last year, he was used to the challenges of working in this location. 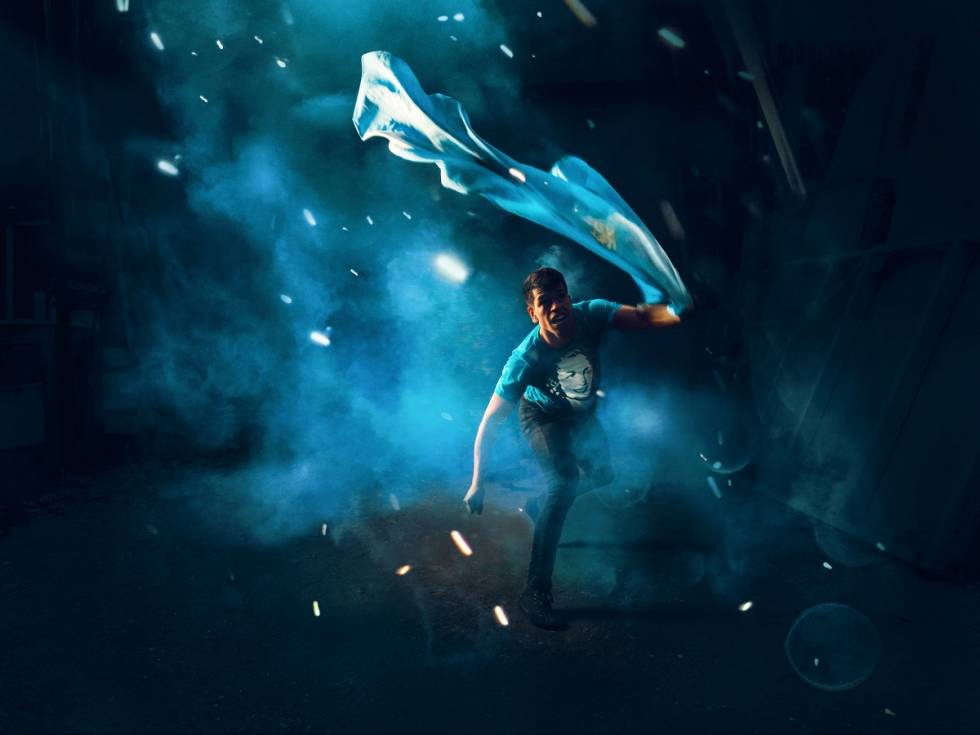 “We have a very established relationship which is hugely valuable, given that the stage rehearsal period is short for a production of this scale. Most of the lighting is programmed overnight with little time onstage with the cast in the correct time of day, ahead of the first performance,” he said.

“Soutra and Jamie chose to set Evita on a dilapidated stadium seating bleacher, which to all intents and purposes looks as though it may have been sat in Regent’s Park for the past one hundred years or so. Jamie was keen that the production and the lighting design harnessed the dynamism and energy of an outdoor music festival. Contrasting with the festival aesthetic, is a starker, directional lighting language, more synonymous with contemporary European opera.”

The LD could envisage different roles for the X4 Bar 20s, not least for their high output during the earlier daylight segment. There are two continuous runs of GLP Impression X4 Bar 20s which are built into the roof and describe the linear form of the scenic structure and contrast with the tungsten Par and Molefay clusters. “They were perfect,” he confirmed. “We used the X4 Bars in single pixel mode, allowing us to utilise them either as a 12-metre curtain of light or more selectively to isolate specific areas, pixel by pixel.”

As for road testing the FUSION Stick 10, GLP’s new IP65-rated linear fixture with different beam angle options, this was a major success. “They were brilliant,” he exclaimed. “We utilised them as footlights to uplight the ascending steps of the set, using the 40° lens.”

Housing 10 x 15W RGBW LEDs, he immediately noticed the volume of light output from such a small unit. “We needed a cold, intense source to contrast with the tungsten uplight from the Pars. The FUSION Sticks deliver a very concentrated light in a discreet form, which proved ideal. The quality of color and resolution of dimming was of the same high standard that we’ve come to expect from GLP products.  They also come with a barn door accessory which we used.”

Finally two large GLP impression X4 XL, housing  a massive 55 x 15W RGBW LEDs, were positioned downstage left and right on the proscenium truss towers. Positioned at the top of each tower, the XLs are utilized as pseudo-follow spots to heighten Evita at key dramatic moments, with bold parallel beams, the designer explained.

The use of the GLP fixtures not only provided Jon Clark with an imaginative solution for the Open Air Theatre production but has further ignited his interest for future productions.