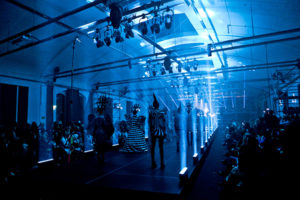 When German based freelance LD Rick Kay (of the CORE Berlin collective) joined forces with local rental company Lautwerfer at the end of 2014 to help deliver the inaugural Alternative Fashion Week it was to mark the start of a rapidly evolving journey. Today the event has expanded from its origins at local techno club E-Werk to the Postbahnhof former railway station.

“AFW originally came to us via a small event company in Berlin but has grown into something really special,” said Kay. “Today it is probably one of the world’s most cutting edge fashion shows.”

Having recently completed his fourth and most ambitious AFW design, the LD credits GLP’s market leading LED fixtures for having provided much of the dynamic throughout. “When I put together the first fashion show Lautwerfer brought along the impression X4 S as a wash light, which was the first time I used it. I was very surprised and impressed by the focus range of the zoom, and with each subsequent AFW we have been doubling up on GLP inventory.”

But rather than adopt a formulaic approach Rick Kay has looked to bring out the avant garde nature of the event, dispensing with much of the conventional white light that accompanies catwalk 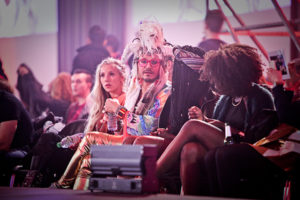 shows. “Since the costumes were going to be weird and eccentric it seemed like the right time to introduce more of a rock concert approach for the fashion world.

“By dispensing with white light we wanted to attract the young generation, and for the bizarre solutions being created by these fantastic international designers I knew would need a bizarre lighting frame.” The industrial landscape of an old concrete railway platform also added to the inspiration. 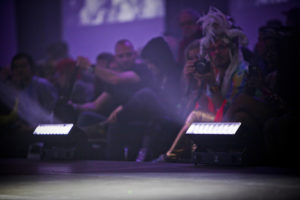 This time around he called on 48 of GLP’s versatile new X4 Bar 10 battens — 24 down each side of the stage and wished it could have been more. Complementing these were 32 of his favored compact X4 S, mixed into an edgy visual cocktail with video and UV “exploring as many angles as we could to highlight each designer,” he said. “We wanted to include video content and the idea was to have something a lot faster moving and achieve a nice balance with the lights.”

Once again it had been Lautwerfer MD, David Bayer, who had introduced the designer to GLP’s flexible, high performance X4 Bar 10 battens. “The zoom range seemed fantastic on those as well and we were very impressed from the start,” noted Kay.

“I spent 22 years as creative director from the Tresor Club in Berlin and really wish they had been around back then. We spent years trying to find an LED strip with a pan axis for use at low level in concrete bunkers and disused venues for illegal raves.”

He presented his latest concept to the clients based around two banks of 24 X4 Bar 10s on either side of the floor. “This would form a tightly-focused white light ‘tunnel’ — and the customer went for it straight away.”

“In fact, the more I talked to Lautwerfer the more obvious it became that the Bar 10 on the floor would be a key feature.

Vacillating between hard edge and soft beam, the X4 Bars negated the need for further front or key lights. “In addition to creating the white tunnel we could flip it in at 45° from the floor, soften it and CTO it as a side light; we could illuminate the roof as an indirect light — and with 48 Bars we had a 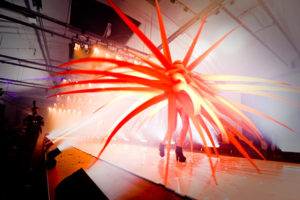 fantastic opportunity to make a classic runway effect with strobe up and down. The sweep was just so effective and I could create all my main looks within the X4 Bars.”

As for the X4 S, these were used to spray lighting over the heads of the audience. “Their real attribute is their multifunctionality,” believes the designer.

Summing up, Rick Kay said, “Having both an effect light and a full-function light was just great, especially working in a place with weight restrictions. It meant we could bathe the stage in full color on the one hand and spray beams around the place from our lighting banks. It was the perfect opportunity to do something magical and theatrical with these fantastic abstract, avant garde costumes.”