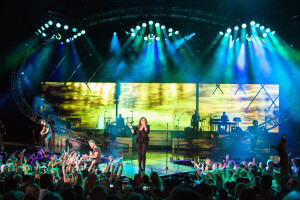 One of the great country music crossover acts in recent years has been Nashville-based Lady Antebellum, whose rising popularity means they can now comfortably fill 20,000-seat amphitheatres.

This year’s Wheels Up tour, presently on its North American leg, has seen experienced LD Paul ‘Arlo’ Guthrie (of Minneapolis based Toss Film & Design) providing an inspired and sensitive concept — one of two tours he has designed for the trio. Significantly, in so doing, he has become the first LD to take out GLP’s new impression X4 Bar 20 high performance battens — the latest addition to the popular X4 family.

Having been heavily in demand this past two years, with work ranging from Fleetwood Mac tours to the Red Bull Crashed Ice North America Events and an Emmy award winning TV show, Guthrie returned to work with the band he first engaged with on 2013’s Take Me Downtown tour.

“I was completely flattered to be considered by Lady Antebellum’s management and loved their energy and work ethic from the first meeting,” he reports.

“We both have a style that is influenced by a lot of diverse sources — so I just brought what I do to what they do. I don’t really pay attention to any genres, I just wanted to make sure you can see them really well and the show has an arc and a flow. They are so much fun to collaborate with that.”

As to working on such a large scale, he adds, “[Production designer] Bruce Rodgers gave us a great set for this tour with some elements that gave me instant inspiration for where to put lights and how to use them. It looks equally well scaled in an arena or amphitheatre and sits nicely with how the band uses the stage and works the crowd. 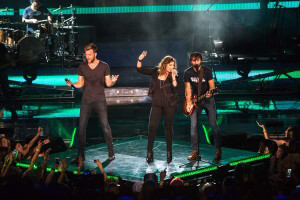 “Bruce had some lighting positions and ideas in place with his pitch to the band, so I had a springboard to start with — but the rest was up to me.” Lighting director/programmer Tony Caporale — described by Guthrie as “the trusted hand at the wheel” — had used the tail end of the last tour to research some different products for this tour — “and I wanted to include GLP’s new impression X4 Bar 20 battens.

“I had hoped I’d be the first to use these new lights,” Paul Guthrie confesses. “It’s fun to have new products in a show … as long as they work, which these certainly did.

“I tried out some demo units on a club show and a TV shoot here in Minneapolis — and was instantly sold.” He could immediately see a role for them in this latest stage design — and admits he would have used more had the budgets allowed

The 14 GLP X4 Bar 20’s that did join the inventory line the thrust stage as foot lights, which in turn double as beam and aerial effects lights.

These 40 inch long bars use 20 high output RGBW LED’s that are packed tightly to give a full batten of light. High quality optics ensure a smooth, homogenized output across the batten through a broad pallet of pastel and saturated colors, allowing for subtle graduated fades, or distinct color breaks between LED’s, with exceptionally smooth dimming and full pixel mapping capabilities.

“The features I love are the colors, the beam and the movement — as well as the way the lenses fill the whole bar and the way they butt up to each other for a long string of continuous light. The beam diversity is great too — from the pin beams to the full flood.” 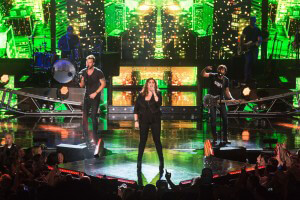 Taking the decision to debut any new fixtures on such a high profile tour requires reassurance that they will be supported. Fortunately Upstaging were again the vendors, — the third time they have supplied Lady Antebellum — while GLP always goes the extra mile for their customers.

Paul Guthrie again: “Upstaging manage to spoil us and outdo themselves every time. The band and myself get incredible service from them and enjoy the many obvious and hidden perks that John Huddleston and the entire gang give us. GLP also exceeded what I would normally expect — and deserve — in terms of service.”

The overall experience could scarcely have been more positive or enjoyable. “Lady Antebellum are a dream to work with, you cannot say enough about how courteous and respectful they are. It’s a very fun and artistically satisfying experience … they have such a great energy and always make a great connection with the audience.”

And having evaluated the worth of the new X4 Bar 20’s Paul Guthrie confirms that he has added them to his tool kit for Van Halen’s summer tour. “This tour will feature a butt ton of impression X4 and X4 Bars,” he quips.