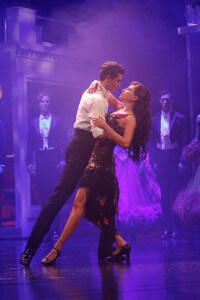 Since premiering with a flourish of sequins and feathers in Sydney back in April 2014, Strictly Ballroom the Musical has been touring Australia, currently residing at Her Majesty’s Theatre, Melbourne. The musical is produced by the original creative team behind the classic 1992 film, including director and co-writer, Baz Luhrmann and set and costume designer, Catherine Martin.

Lighting designer for the production is Hugh Vanstone who was keen to specify the GLP impression X4 into the show, describing them as “tremendously useful” and declaring himself to be a big fan. Consequently there are 19 impression X4 fixtures in the lighting design, primarily rigged low. Some act as footlights, some are in low FOH box boom/ashtray positions and some are on the tops of each of the roving booms used throughout the show.

The impression X4 is principally used for tight lighting of faces, as well as to highlight scenery. The face lighting is generally in skin tone colors, whilst the scenery shots use the rich colors that the X4 is particularly effective at delivering. For example, they do a gorgeous deep red color that is used several times in the show. 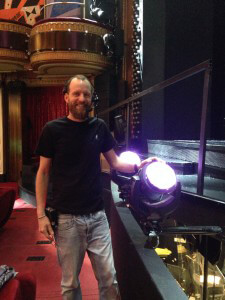 With over 350 shows under his belt, Head Electrician Ben Wilcocks comments that since the show opened, they haven’t had to swap out any of the impression X4 fixtures. “To tell you the truth, apart from the odd clean, we haven’t had to do anything to the impression X4 so I’ve been really happy with them!” he remarked. “Because they are so small and easily moved, they are ideal for getting shots that other lights can’t.”

“The units do transfer and rig easily,” agreed Production Electrician Dale Mounsey. “Their light weight makes them easy to rig by one person in any position, even over-rigged on a pipe. Our roving boom units travel pre-rigged at the top of our booms. We have never had any travel related issues with touring them in that way.” 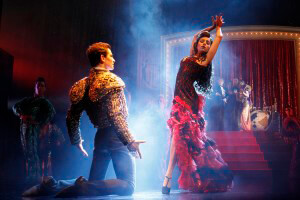 “There are many features to be impressed about, including the pan and tilt speed, which is great,” added Dale. “Another specific feature that impressed us is the ability to control each individual LED in the fixture. As an example, our X4 footlights are mounted just off the front of the stage. To keep them out of sight lines they are mounted just below the level of the stage. When Hugh wanted to do a face shot of someone standing further upstage than normal, we had to tilt the fixture down. But this meant we were lighting the front face of the stage as well as the actor. Hugh’s solution to this was to turn off all the LED’s on the bottom three rows of the fixture. This stopped the light hitting the front edge, and still left enough of the very bright LED’s on to light the actor’s face upstage.”

The show is scheduled to move to Brisbane’s QPAC Theatre in September.