Dillon Production Services, based in Norcross, Georgia have added GLP’s impression Spot One fixture to their inventory allowing them to offer their customers a full energy efficient LED lighting system. 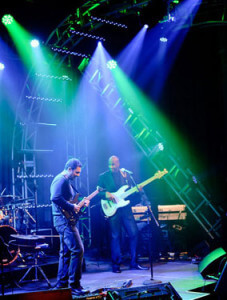 The purchase of 18 GLP impression Spot One LED fixtures allows them to offer a full complement of both spot and wash based fixtures of the latest technology and efficiency to their customers. The company recently held an invitation only open house at their facility, giving them the opportunity to show off this new addition to their inventory.

In between sets of the Atlanta based band “Papamichael’s World Group”, Matt Dillon, President of Dillon Production Services, spoke to the crowd about his goal to take his company green by acquiring an all LED rig. He compared the power draw of the rig, which included 18 of the new impression Spot Ones, 31 linear LED fixtures, 58 LED pars, 24 LED moving wash fixtures, and 18 additional LED moving fixtures to “the equivalent of 6 hair dryers”, which drew cheers from the nearly 150 lighting designers, corporate customers and industry veterans who attended the event.

Matt commented on his open house and new inventory, “It was a great event that helped showcase some of our new inventory, as well as allowing people to see that technology in this field is going green and so is Dillon!”

Rick Fallon, Eastern Regional Sales Manager for GLP added, “The impression Spot One introduces a new era of LED technology for high output fixtures. It is unique in bringing the efficiency, output levels and feature set of conventional high powered discharge lamps to the world of LED – and then some. When Matt reviewed the fixtures before his purchase, he not only recognized the environmental benefits of this fixture, but also the low cost of ownership and set up that will contribute to his 17 year old company’s bottom line.”