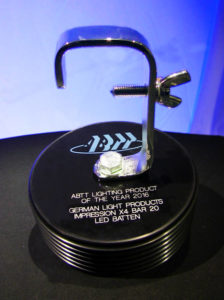 The stellar success of GLP’s impression X4 Bars was recognized for the second time in a month — by major industry bodies on both sides of the Atlantic.

Following its Live Design Award in New York the product picked up a similar ‘Lighting Product of the Year’ gong at the Association of British Theatre Technicians Awards 2016, which took place during the ABTT Theatre Show at Alexandra Palace, London.

It was voted after an experienced jury of working practitioners and industry peers had considered entries for this year’s ABTT Awards which were carefully reviewed on the day.

The GLP impression X4 Bar 20 LED Batten stood out to the judges, who remarked that “GLP’s new Batten, with its innovative zoom feature and impressive light output, reinvents the light curtain.”

GLP Inc president, Mark Ravenhill, added, “We are delighted that for the second time in a week, we have been able to pick up major lighting awards in the two capitals of theatre — New York and London.

And Noel ‘Roly’ Smith, who heads GLP’s UK operation, added, “This reflects the faith that designers have been placing in this unique product since its launch and we are grateful to the many designers who have been specifying it.”

Commenting on the London event overall, ABTT CEO Robin Townley said: “The Awards ceremony was again a great opportunity for exhibitors and visitors to gather and celebrate good technology and excellent technical practice.”