Having used GLP’s impression X4 LED heads in the design of Fleetwood Mac’s current touring set, production designer Paul ‘Arlo’ Guthrie has turned to 16 of the small impression X4S for the current theatre (and festival) shows by veteran rock singer, Chris Isaak. These are mounted on five vertical pipes — four on the center bar and three each on the others. 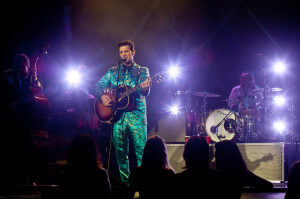 With economy at the forefront of his thinking, Guthrie sensed that the new X4S fixtures could not only be rigged quickly, within their own touring structures, but at the same time pack a lot of punch. “We haven’t done a ‘beamy’ show for Chris in a while so I wanted something that was adaptable to the range of venues we were playing, and would provide us with options,” he admits. “I also wanted a physically smaller light to fit with the scale of the show.”

The venues themselves have varied considerably — from 1,000-capacity wineries through to 10,000-seat amphitheaters; hence the need for scalability.

The impression X4S combines power (from 7 x 15W RGBW programmable LED’s), flexibility, and practicality in a small, compact design and can be programmed with custom and multiple pattern effects.

Offering homogenized color mixing across a wide color spectrum it boasts full Zoom flexibility (from a tight 7° to a wide 50°) and weighs in at less than 12 lbs.

Arlo admits that the combination of size, great color rendering and zoom range had been the prime reasons for specifying the fixtures, which were tasked with providing aerial beam effects and texturing.

The stage set itself incorporates a burning piano, a woven backdrop and some LED riser surrounds. Says the LD, who has been working with the artist for the past 13 years, “Each year I get together with Chris and draw [ideas] on napkins, tablecloths and hotel stationery. He is a great artist and we always have fun collaborating on ideas. We try and keep the lighting tasteful and theatrical.” 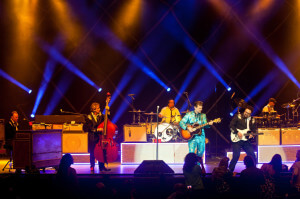 His views are shared by the tour’s programmer and board operator Jared Trinnaman, who describes the X4S as being an easy fixture to work with. “All the features are laid out within the DMX channels in a way that make sense. Features are easy to access and use, and they are right where you expect them to be.

“The fixture responds instantly to the console commands and there is no noticeable lag in response. On top of that, the pan and tilt speeds are fantastic on the X4S — not only are they fast, but the movements are fluid.”

Like Arlo, he is also a major advocate of the brightness and color referencing. “The range is great,” notes Jared. “It hits the saturated colors, pastels, various color temperatures — and the white LED really cuts through.

“I am constantly finding new ways to build on the show, which revolves entirely around the impressions, and gain a better understanding of the range of colors it is capable of.”

Furthermore the heads have run entirely trouble free. “These are stout little fixtures and I would gladly use the X4S again — in all kinds of situations,” appraises Jared.

But the final word goes to Paul Guthrie: “The impression X4S works on so many levels,” he says. “I have been particularly impressed by the zoom function, the high brightness, superior optics, pixel feature, speed of response, compact size and general reliability.”