The new impression X4 from GLP brings power, flexibility and practicality in a breakthrough design. Incorporating 19 quad color RGBW LED’s, each rated at 15 Watts, the impression X4 offers a single homogenized color output from its unique looking front lens across a wide color spectrum and with high output.

By using quad color LED’s, the impression X4 features a color range from the deep saturates through to soft pastel shades by incorporating more of the white LED element, which has a native color temperature of 5600K, and is complimented by a variable color temperature correction channel. 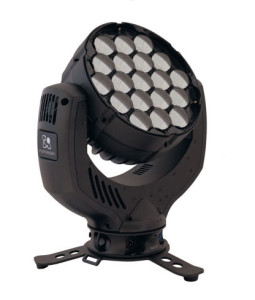 A unique feature to the impression X4 lies behind its ‘bug eyes’, with the ability to activate a series of pre-defined patterns across the front lens. Using just a single channel, 250 pattern options are available which instantly turn the fixture into a great effect for work into a camera lens, or audience gags. But, limiting designers to pre-programmed effects can be totally frustrating, so GLP have added the ability for users to create their own effects, patterns and chases on the fly and record them into their show. It’s all incorporated into a DMX profile that uses just 20 channels, so great features don’t come at a cost of many channels.

Adding flexibility is a key, and the impression X4 turns things up considerably from previous fixtures with an expansive 7:1 zoom ratio that ranges from 7 to 50 degrees. At its narrowest, the impression X4 features both a hard and soft edged beam, allowing for aerial effects along with powerful color washes that can cut through cleanly on todays’ stages and studio floors.

As users have come to expect from GLP the impression X4 gives even and consistent color across its beam at all angles. GLP’s tight selection process for its LED’s ensures this color quality not just within any fixture, but also across different fixtures, now and into the future.

The cooling system for the impression X4 is designed around a large back-shell which collects heat from the fixture and dissipates it using convection only for silent operation. If you really want to pump up the heat, the impression X4 does have an onboard fan to ensure that it stays cool enough to keep operating with maximum output.

The impression X4 features 16 bit pan and tilt movement with coverage of 660 degrees of pan and 260 degrees of tilt, with automatic feedback should the fixture be knocked out of position.

The look of the impression X4 continues on from earlier GLP fixtures and features a baseless design to keep the fixture as low profile and lightweight as possible. A floor stand is included with every fixture, and for rigging the impression X4 can take a standard half coupler directly into its base, or use an optional omega bracket attachment ensuring it can be operated in any orientation.

For ease of use anywhere in the world, the impression X4 comes with a fully auto sensing power supply which operates anywhere from 100-240V at 50/60Hz.

The impression X4 is available in 4 way and 6 way flight cases as standard, or in single box packaging.