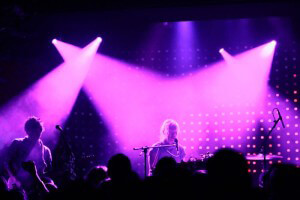 Located on the site of the historic Village Gate in New York’s Greenwich Village, when the new owners took over the interior was completely redrawn, and John Storyk (of Walters-Storyk Design Group), the designer behind Jimi Hendrix’s Electric Ladyland Studios, helped design the room sonically.

The venue has since undergone various technical upgrades, including remotely controlled HD cameras, culminating in this latest investment, with the acquisition of 12 automated Spot One LED fixtures from 4Wall Entertainment Lighting, who have been providing LPR with high-level service for the past three years.

Said the club’s Director of Lighting, Jonathan Talley, “I had heard talk about about the new impression Spot One from colleagues and designers coming through LPR and contacted Mark Ravenhill and Rick Fallon at GLP; from the very beginning I was really impressed by their communication and service.

“I had been looking, and waiting, for this type of fixture for some time. Powering movers is never cheap and we always want to be more eco-friendly as well as cost efficient. Finding a fixture that can live up to and surpass moving heads allows us to do that, and as a replacement for our conventional discharge spots they provide added flexibility.”

The onsite demo confirmed all the expectations. “Having a true hard edge LED profile fixture with two fully indexable gobo wheels as well as great color mixing was impressive,” continued Talley. “I also loved having the choice of either snap LED color changes or smooth dimming and color mixing. When I saw how solidly and intelligently they were constructed I knew we needed them in our rig.”

With its ‘in the round’ stage, the room allows for multiple setups. For instance in traditional stage setups eight Spot Ones are placed on the back grid and four over the audience. “We love using these as front specials or to throw gobo projections over the back wall of the stage,” he declares.

NewsPictures/LePoissonRouge_Pic2_PhotoCreditAdamSiegel.jpgThe feedback from Jonathan Talley’s crew has been equally positive. “At any given time at least one or two of our staff is on a national tour and they all love designing with the impression Spot One’s,” he confirms.

He also notes the Spot Ones’ ease of maintenance, since the cooling fans are set up so that haze and dust don’t get sucked through the optics and mechanics inside. “This makes keeping them going strong much more efficient and so I never have that nagging fear that a fixture is going to break down at the last minute.”

As for visiting LD’s, he says, the color mixing and sheer power of the fixture is what has been impressing them.

With NPR producing live videocasts of select shows and VH1 also recently shooting a performance with the artist K’naan, the lighting director says that GLP has helped them raise the bar and maintain production values at top level.

In fact the Spot One is providing equally popular with artistes and patrons alike. “It is great to have a light with truly saturated colors bright enough to be seen with ease by the audience — both on stage and on camera,” states Tally. “We have had promoters rave to us about how much of a difference it makes, while artistes love performing under them because they don’t generate as much heat as traditional moving heads. For us they are simply a lot of fun!”

Around the same time LPR also acquired the impressive G-LEC Solaris fully flexible, cable based video curtain. “Everyone notices and loves it,” says the venue’s lighting director. “We use it for as many shows as possible because of its wow factor.”

“Whether we are running visualizations, or a guest video artist is using it through his media server, the Solaris system gets attention. I personally love the aesthetic because it doesn’t look like just another LED video wall, but like a design element.”, Jonathan concluded.