For the past two decades, Kentucky band, My Morning Jacket (MMJ) has been serving up its own unique brand of rock music.

Piloting their lightshow, an essential part of their stage dynamics, for over 13 years has been Marc Janowitz of E26 Design, frequently drawing on different generations of GLP LED solutions to meet his requirements.

The entire impression range has provided him with a solid workhorse—in fact he had been the first LD to take the original impression X4 on the road when it was launched.  “The wash lights have been part of my toolbox for many years—from X4 S to X4 XL and all in between.  Now adding the X4 Bars to that the family just makes perfect sense.”

MMJ had been on hiatus for 17months before embarking on a limited four-date run in August—the reason for the unique new scenography. This included two shows at Red Rocks Amphitheater in Colorado, one at the Capital Theatre in Port Chester, New York (to celebrate the 20th anniversary and reissue of their first record) and a further show at Forest Hills Stadium in Queens.  “From shop prep to the end of the tour was less than three weeks,” notes Marc. “We wanted to make sure that the first shows back after so many months looked new and fresh.” 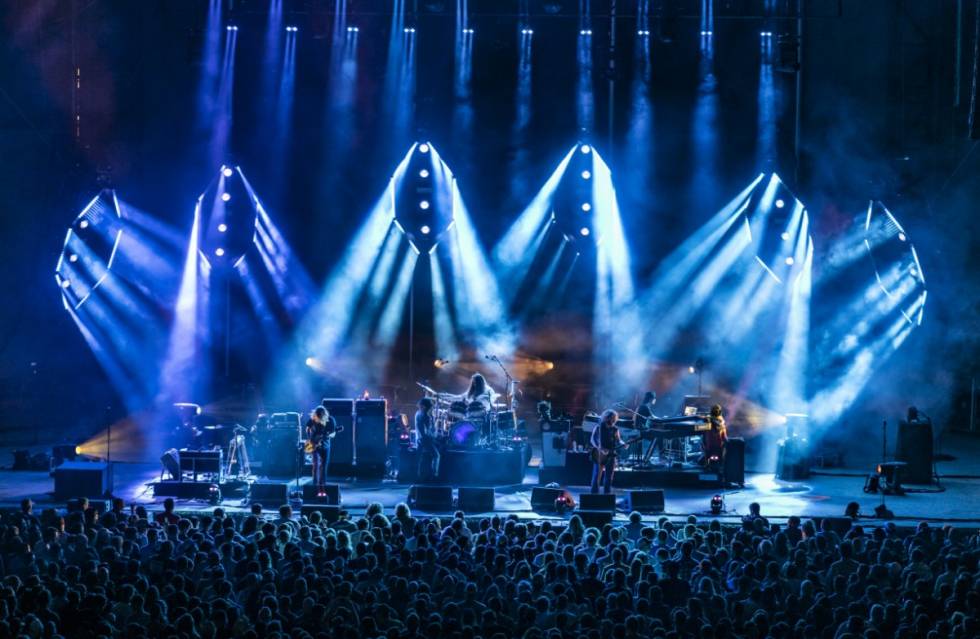 He said the band had wanted different ‘shapes’ of light. “So, I updated the design and added six pods across the back. Each pod had a crystal shape with the outline of the shape, incorporating, among other fixtures, X4 Bar 20s with a JDC1 [GLP hybrid strobe] in the centre.”

The addition of the X4 Bars to the design he described as “seamless”. Explaining this, he said, “The show already had so much carry-over programming with the X4 and X4 S from previous MMJ tours and I wanted to build from that. Because the engine is the same, the color space and the reaction time of all the fixtures melded together seamlessly, and the X4 Bar 20 was a great tool for that application.”

Reviewing the JDC1 hybrid, he remarked, “While I’ve always loved a good xenon strobe, I felt it was time to add more versatility and variety to the arsenal.  I’d been impressed by the JDC1 since I first had my face melted by it at LDI a few years back. In fact, I still have the sunglasses,” he quipped.  “I was glad to finally get to take them out for a spin.

“I ran the JDC’s in 68-channel mode so that I could break up the face and make it sparkle. They were part of the Hog pixel map as well—they are impressive in their abilities as white strobes, color strobes, eye candy, motion inducing, or even just as audience or stage wash.”

The X4 Bar 20’s were also used in pixel mode—sometimes mapped to the internal pixel mapper in the Wholehog desk, and at other times as conventional light curtains. “I enjoyed using them just a few pixels at a time for some songs then full linear for others,” he explained.

The equipment was supplied by Pulse Lighting. “They provided great support,” praises Marc. “Paul and Mikey, being LD’s themselves, have a knack for predicting what a designer might need and helping to prepare for that ahead of time.”

Also, an essential part of his team was assistant LD/ FOH tech, Chase Nichols. “He’s instrumental in the process,” states Marc. “I serve a dual role on this tour as both Production/Lighting Designer and Production Manager. Knowing that Chase is keeping the lighting moving along while I’m keeping the tour machine running makes the whole process manageable. He’s also a great programmer and can help offer insight and create looks and effects that I then implement into the show.

“In fact the entire MMJ crew is really top notch—it’s a great family vibe out there … band, crew and fans.”