A record-breaking concert by EDM artist ILLENIUM at the new Allegiant Stadium in Las Vegas, was brought to life recently, with over 100 fixtures from the GLP inventory. 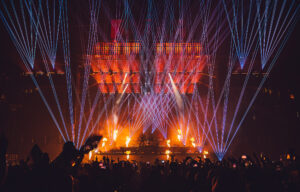 ILLENIUM’s long-serving LD and production designer, Chuck Williams of Nexus AV, has been with the artist (real name Nick Miller) since the beginning of his journey six years ago. He selected 62 of GLP’s multi-award winning impression X4 Bar 20 battens and 40 JDC1 hybrid strobes for mission-critical roles, describing the latter as being “in the top three fixtures of all time.”

The DJ / producer’s inventive music and collaborations have made him one of the most successful crossover electronic artists today, and in a three-set concert he performed Trilogy, commemorating his previous three albums – Ashes, Awake, and Ascend – before previewing his latest album, a musical journey called Fallen Embers.

ILLENIUM has taken the electronic world by storm, and some 35,000 of his adoring fans, who packed into the venue, were treated to a six-hour show, supported by opening DJ acts, CloudNone and 3LAU. 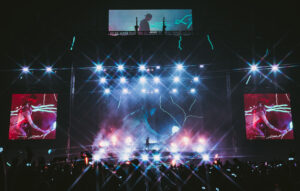 Chuck Williams, who co-runs Nexus AV with business partner Reid Warner, explained that this was the first attended event in the new 65,000-cap football stadium and ILLENIUM was the first EDM artist to ever play a stadium for a single headline show. He performed on a giant Stageline structure, themed as a phoenix, which according to the LD depicts the artist’s remarkable recovery as a former addict. “His popularity has grown really fast as his music is different from a lot of other music; it’s about love and people connect with it very deeply.”

Explaining his choice of fixtures, he said: “This is my first time using X4 Bars other than at festivals, but I have been using JDC1 for a few years. They are in my top three fixtures of all time—it’s my most requested fixture and I can’t envisage a show without them. I love the pixel chasing and the central [white light] tube is so bright, it’s a real workhorse.”

As for the X4 Bars, he says, they were fast and consistent. “I enjoy the pixel chasing a lot and to have a nice even spread. They surpassed all my expectations, giving me what I needed, which made my life a lot easier.” 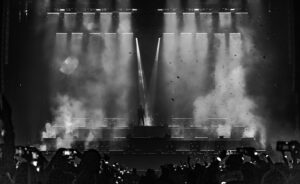 All of the fixtures were mounted on Tyler truss within a tiered stage structure, pre-rigged for super-fast set-up. “This was a three-tiered multi-level structure with three truss lines that lined up with the tiered flooring,” he explained. “In this way I managed to get a really even spread.”

Williams handles all his own programming and piloted the show on an MA Lighting grandMA3, opting for SPix (68 DMX channel) mode “to get as much out of the fixture as possible.” He added: “I was able to generate so many looks [from the JDC1]to fit the theme of the music. They are tiltable, and overall such a dynamic light, that delivers way more than a strobe. Having a multi-fixture, with lots of flashes and tricks, is just great for EDM. There’s not been a product yet that touches it in the strobe market.

“As for the X4 Bar 20s, we single pixel-mapped these. I always go for high channel resolution, programming the Bars in [SPixH] 89 channel mode.”

The event was supported by Ryan Knutson, head of Brown Note Productions, who are one of Williams’ key vendors. “There’s no need to shop around when you have a company like this on your doorstep for local support.” 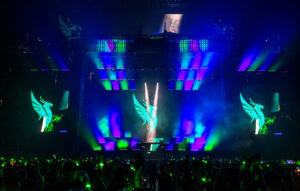 He added that the Vegas Trilogy show had originally intended to be part of a tour.

“The initial plan was to do 10 nights—but with the restrictions they decided instead to do one big bang show. Vegas was selected as the destination hotspot as it was released from restrictions early.

“Nevertheless, we only had six weeks to put the show together. It was a real rush. I was excited, nervous and stressed at the same time—but it worked out really well.

“On top of that, we were only able to give his fans six weeks’ notice, so it was pretty amazing that 35,000 turned out, and he was thrilled. He’s the first DJ in American history to do this!”

Joint production managers for the show were Michael ‘Curly’ Jobson and Royal Jensen.

And with business now getting back to normal, this show was followed by the local Global Dance Event in Colorado and then the mighty Lollapalooza where ILLENIUM will headline the Bud Light Stage on the Thursday.