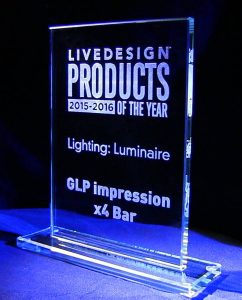 The overwhelming sales success of GLP’s impression X4 Bar 10 and Bar 20 versatile high performance battens has been recognized by one of North America’s leading trade journals.

Live Design has voted this unique family as one of its Products of the Year for 2015-16 (in the Luminaire category).

The awards were chosen by panels of prestigious designers and professionals in the disciplines of lighting, sound and projection, and presented at a reception in New York on June 13 by staff from Live Design magazine.

The X4 Bar won over the judges of the Lighting Products of the Year with its ability to be much more than a cyc or accent light, one stating, “You can use it to light a cyc, of course, but what’s much more interesting is its use as a replacement for a light curtain and other ‘solid wall of linear light’ type effects.”

Another award judge added “What a great idea to package all of these features into a linear form factor, providing great opportunities for innovative design.”

First previewed in prototype form at the PLASA Show in London in late 2014, by the following spring both the shorter and longer X4 Bars were appearing on major productions all over the world — and across many different segments. They were being specified by leading lighting designers faster than rental companies could accommodate them.

In North America this included appearances on high profile televised events such as Super Bowl 50 Halftime Show 2016, The Grammys 2016 and Billboard Music Awards 2016. From theatre they have been a strong feature on the Broadway production of Fiddler on the Roof and LA Opera’s Madame Butterfly, and in concert performances with Madonna and Paul McCartney.

Stated GLP Inc president Mark Ravenhill, who picked up the award, “We are delighted not only that this has been recognized by Live Design, and their panel of lighting professionals, but we are also extremely grateful to the growing community of designers and users of the fixture — across all disciplines.”