Das Duell um die Welt (‘The Duel around the World’) is a popular game show that has been broadcast on Germany’s ProSieben network since 2012. In the two-part show, moderators Klaas Heufer-Umlauf and Joko Winterscheidt first have to face a series of challenges in different countries around the world before returning to solve further tasks in the studio for the respective countries in the second half. 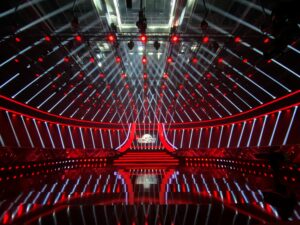 Since 2014, mdc licht.gestalten.gmbh & co.kg has been responsible for lighting technology for the show, produced by Florida Entertainment GmbH with lighting designer Jonas König. The final season aired live on 4th and 11th December 2021, and an episode for 2022 was taped during this production period. MLS Magic Light & Sound GmbH are the lighting suppliers for the show, which is produced in the Bavaria Studios in Munich. 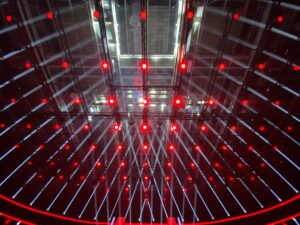 The studio itself consists of a spacious playing area surrounded by long LED banners and spotlights. A lighting matrix of 141 GLP impression X4 moving lights hangs above the playing surface.

“I’m a big fan of clear and neat designs,” says Jonas König. “Consequently, I had a design in mind for Das Duell um die Welt that can react flexibly to any requirement and at the same time look clean. The show requires great creativity, because there are always many different, unexpected, sometimes crazy things happening. 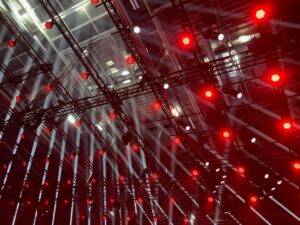 “The X4 matrix serves as a show and key light. The two-dimensional division of the devices allows each position to be illuminated individually in a relaxed manner. The impression S350 spots, on the other hand, are used for fixed moderation positions and are occasionally used to emphasize smaller objects. Since these positions are fixed in advance, the S350 can be planned accordingly. 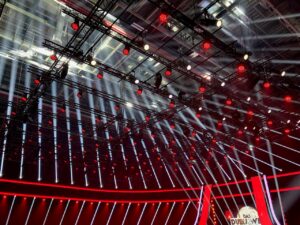 “Both the X4 and the S350 are very small yet powerful devices,” notes König. “I find the output very harmonious in comparison to the chassis size. The devices are always available on the market in sufficient numbers and have an extremely low failure rate. With the low power consumption, it is also possible to produce the show in a climate-friendly manner, which is rightly becoming more and more important.” 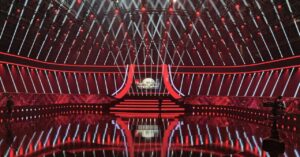