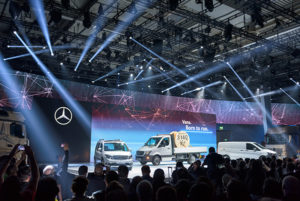 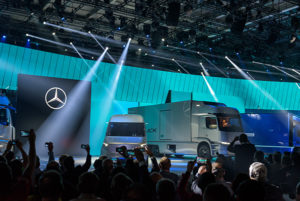 logistics, which took place in Hannover in late September.

The world market leader in commercial vehicles presented 70 trucks, vans and buses from brands Mercedes-Benz, Fuso and Setra. The premieres were brought to life thanks to an impressive 144 GT-1 discharge lamp fixtures from GLP. And with more than 16,000 m² of exhibition space at their disposal, an additional 24 GLP impression X4 and 280 impression X4L were used to create a vibrant atmosphere on the stand.

rgb gmbh was entrusted with this extensive production task. In fact they were responsible for the lighting design and technical planning, including rigging, for the entire exhibition stand. The technical service provider for the lighting and rigging was PRG from Hamburg. 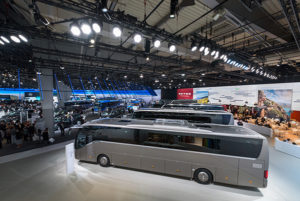 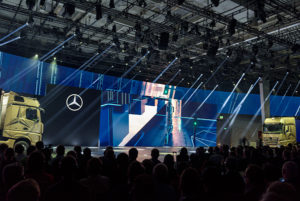 At the 66th IAA Commercial Vehicle Show over 2,000 companies from 52 countries exhibited. They occupied 270,000 sqm of exhibition space, and presented over 330 world premieres which were admired by more than 287,000 visitors. This year’s hot topics were digitization, electric mobility and urban logistics.