TV Premiere for GLP impression X5 on Finals of Germany’s Search for a Superstar Friday July 8, 2022

Deutschland sucht den Superstar (Germany’s Search for a Superstar), better known as DSDS, is one of Germany’s longest-running television hits, having just concluded series 19. For GLP and lighting designer Manuel da Costa, who has been in charge of the TV format for 16 years, this year’s live finals were something special, because 100 of the new, next-generation impression X5 wash lights received their German TV premiere in the MMC Studios in Cologne. 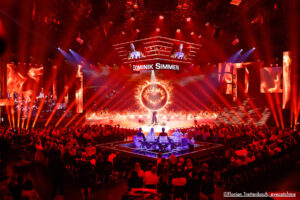 Da Costa and Jonas König, from mdc licht.gestalten, created the lighting design for the shows and took the opportunity to integrate GLP’s new impression X5 into the design. In the DSDS finals, da Costa used them mainly as white or camera lights both in front of and above the stage.Da Costa was convinced of the qualities of the X5 after receiving a demo: “In the spring, [GLP’s] Oliver Schwendke and Michael Feldmann provided an X5 demo. As a result, the decision was made, together with MLS Magic light + sound as an early adopter, to invest in 100 of these new wash lights,” the designer remembers. MLS magic light + sound is one of the leading technology service providers in the television sector in Germany – and da Costa was one of the first clients to be closely involved in the decision-making process. When asked what features had convinced him of the X5, he answers: “Its multifunctionality, paired with the high quality in this class.” 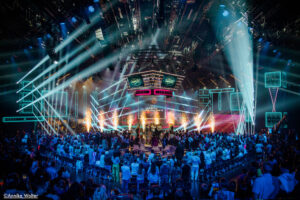 The GLP impression X5 delivers an extraordinary light output, with a large color space from 19 powerful 40W RGBL LEDs. Thanks to the new iQ.Gamut color algorithm, the wash light generates a clean white point with a CRI 90/TLCI 90 at 6,500 kelvin by default. It also offers the option of quickly switching to other fixed color temperatures, all of which are precisely calibrated and offer consistent color quality.

With the new super-fast 1:16 zoom mechanism, the impression X5 offers a penetrating 3.5° parallel beam and a homogeneous wash up to 60°. The new lens design, arranged in a circle, enables contemporary effects that can be varied to create fantastic looks, using individual pixel control and pixel mapping as well as the integrated dynamic pattern effects. 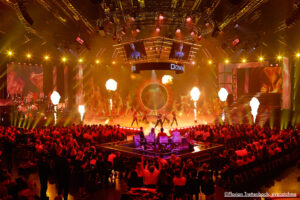 “In my day-to-day work, the X5 fulfils the function of a white light fixture on the one hand – and thanks to the additional lime LED, it does it extremely well,” da Costa continues. “This makes the color spectrum much richer. With the integrated magenta/green correction and the iQ.Gamut color algorithm, the impression X5 generates really good white. I had tested this in the studio beforehand – and I wasn’t disappointed during production either.”

“The lamp also offers an extensive function and effects package with individual pixel control, tungsten simulation, and useful pattern effects when things have to be done quickly,” he adds. “This in turn makes the X5 a genuine show light and gives me more flexibility when designing. “Last but not least, moving lights such as the X5, which can be used very flexibly at a high level, are a plus point that should not be underestimated in these times of shrinking budgets.”