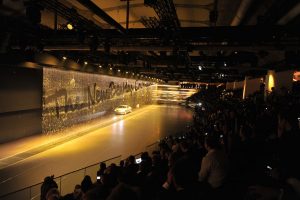 For the four weeks leading up to the event, the team of Leyendecker — Lightvision Sound & Service, and technical supervisor Martin Kuhn had reconstructed a former freight railway station near Paris into a show stage for each single premiere of the fleet.

Responsible for the lighting design was Nik Evers. Amongst other fixtures, he specified a total of 120 GLP impression RZ heads for this event, which were used for the illumination of the architecture, the lounge and the after-show area, as well as for the show itself.

In the past, Evers has used the impression 90 but now focused on the zoom effect. “Due to its low weight and low power consumption the impression RZ can be utilized in numerous types of application. The mixture of colors and the beam quality of the zoom optic meet the requirements I expect from a professional LED washlight,” he said. 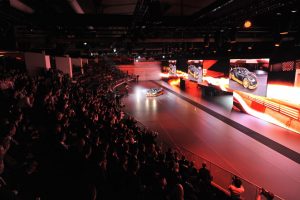 The Volkswagen Group presented a fascinating visual tour through the brands — not only new VW and Audi models but also brands like Bentley, Bugatti, Lamborghini, Porsche, Seat, Škoda and Volkswagen SUV, which had been imaginatively illuminated by Nik Evers and his lighting crew. During the impressive 40 minute show, guests were treated to a variety of visual treats including a stage set on fire, a caddy in a huge parcel, and a ski jump for the Audi Showcar.