44 RZ 120’s the mainstay of powerful but economical arena design.

Back in the summer, Danish lighting designer Christian Bonde prepared to scale up the Bullet For My Valentine lighting production he had successfully taken round a US club tour, in preparation for European arenas.

Knowing the vagaries of heavy travelling and short load in times, he needed a powerful floor rig, which required no more than a one man set up. And the impressions fit the bill perfectly. 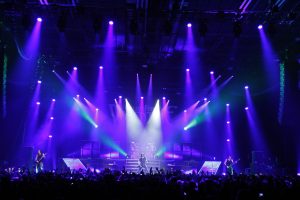 The Download Festival in the UK marked the start of the upscaling process — from an inventory of ten original impression RGB moving heads to 44 RZ 120 Zooms — in anticipation of the Welsh rockers’ current tour. The RZ 120’s and 700W profile discharge moving light became the mainstays of the new rig — with the lighting support for the European leg coming from Neg Earth.

The complement of floor lights was extended, with 20 x GLP impressions now deployed along with strobes and blinders, while the grid comprises six ladders, constructed from one single pipe. “We were able to do this because of the small size and low weight of the fixtures,” stated Bonde.

Explaining the new design rationale, he said, “Once again, we have limited space on the trucks, so therefore the task was to design a ‘smaller’ rig, with a back, mid and front truss — along with two wing trusses in the UK for the Imag screens and lights — with the ladders dropping down from the trusses.

“This tour needed to look big, but not to be big — and using an entire wall of lights has given the show a big look,” he said.

A major factor in this has been the economy of the impressions. Aside from the impressive power-to-weight ratio, Christian Bonde notes that they are strong and road-proof, and with super-fast response. “They also have a nice hardware design, easy menus … plus you get lots of output from a small fixture; in some situations these are similar to a conventional wash.”

The lighting designer has been using the full zoom facility of the RZ 120’s — both as an effect and also on the backdrops. And controlling the fixtures from a GrandMA lighting control has enabled him to initiate 0-sec cues — for fast breaks in the music — which has been a real bonus.

In terms of output, the RZ 120’s have been holding their own effortlessly both alongside the high wattage profile spots and the 72 sq metres of WinVision LED screens used on the UK leg of the tour.

On top of everything else the RZ 120’s have remained rock solid. “We have been touring with GLP impressions since April — including two American tours, one European festival tour and a European/UK tour — and in that time I have only had one fixture break down. Now that’s pretty impressive.”

And the back-up from GLP has been first class, he says — across every kilometre the band has covered over the past eight months.