Ask Davy Sherwin, Snow Patrol’s lighting designer for the past two decades, what three attributes a fixture needs to exhibit in order to earn a place in his tool kit, and he will probably reply: “Color, color… and color!”

When GLP’s next generation strobe hybrid, the XDC1 IP Hybrid, returned to the LCR Lighting warehouse in Blackburn after making its auspicious debut on Ed Sheeran’s +–=÷x tour (pronounced “Mathematics”), directors Michael Oates and Ryan Hopkins wasted no time in apprising the LD of the properties of the XDC1. 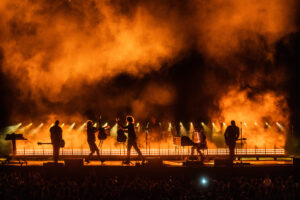 The timing couldn’t have been better, as Sherwin was attempting to tweak a festival rig design for Snow Patrol that had hit the buffers when Covid broke, so they could take care of unfinished business and complete six or so outstanding festival commitments in the UK, the Republic of Ireland, and northern Europe. These included Latitude Festival and Electric Picnic in Stradbally, County Laois.

Davy Sherwin was confident that the GLP JDC1 hybrid strobes he had used in front of the riser on the previous dates could now be supercharged, with something of a steroid rush – thanks to the arrival of the XDC1 IP Hybrid.  This merges a high-performance strobe with a very powerful wash light, offering superior color quality – all packaged in a weatherproof IP65 housing, making it perfect for the festival season. 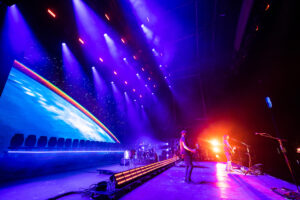 “I have been using GLP for years, particularly the impression X4 Bar 20s, and was confident of being able to mix things up,” he says. “I was looking for something with individual color control and had the built-in strobe. LCR, who are my main vendor, suggested I take a look at the new XDC1 IP Hybrid, which they had had out with Ed Sheeran, and it’s exactly what I was after.”

Sherwin says he took 18 of the fixtures based entirely on trust and GLP’s reputation. “I didn’t know [their capabilities] until I got them into the pre-viz room, although Ryan [Hopkins] had sent me a video. So I wasn’t entirely in the dark. Besides, I know and trust GLP and I knew the colors would be bang on if they were anything like the JDC1.” 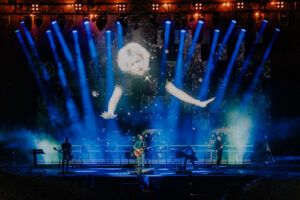 The stage scenography for Snow Patrol was based on straight lines of lighting. A row of straight truss at the back of the stage bore tubes and movers but it was on the 24ft-wide band riser that Davy Sherwin had a design rethink, breaking from convention to conjure up a fascia of XDC1s across the full width, all seamlessly butted together and with the color accurately cloned from a JDC1.

And it was this that impressed him the most – without even needing to touch the new GLP lime which complements the RGB palette. GLP’s proprietary iQ.Gamut color algorithm ensures optimum light output with excellent color rendering. Each head features a total of 18 wash LEDs with 40W output each in three rows of pixels, along with two powerful white strobe tubes. 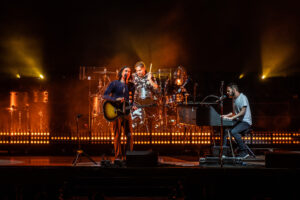 “Colors are my main thing and they have to be absolutely right,” insists the designer. “Both JDC1 and XDC1 deliver excellent pastels and saturates, along with good clean cyans. I also do an in-between-songs preset for the band that is a tungsten look, and this matches the old generic tungstens perfectly.”

Davy Sherwin was responsible for his own programming, using GLP’s Mode 4 Multi-channel (full pixel mappable, 97 DMX channels) to derive full benefit (despite the heavy parameter count). And it proved well worthwhile, as he managed to derive some unexpected benefits from the individual mapping capabilities.

“I had a nice angle set on the band which backlit the performers. Because of the individual control I was able to pick up little shapes and shadows from the cameras on the pixels – for instance, I was able to create all sorts of interesting patterns on the keyboard player by side-lighting him,” he explains.

And as for the strobing on the XDC1, he couldn’t have been more positive. “It was second to none,” he says, “… intense and white. It’s an extremely powerful strobe, and having two tubes to map provided an additional bonus.”

Finally, the reliability of GLP’s superior build came through once again. “We didn’t lose one fixture all summer – nor have we ever,” Sherwin concludes.