Barten have been providing sound, lighting, AV, and production management services for the event, which honors the best modular trade show exhibits and event designs, for several years.

Dave Barten’s eponymous company has a long association with the event, as it does with GLP — having first been introduced to the German company’s unique LED solutions as a result of being the ‘trussing partner’ of Cosmic Truss, for which GLP is the distributor for the Americas. Today they own a quantity of impression Spot One and Volkslicht Zoom fixtures, which are regularly out on duty.

Specializing in the trade show and corporate theater sector since 1989, Barten says his business today is entirely LED centric. “We rarely use conventional fixtures anymore.  I needed to get these [GLP] fixtures into our playing field to see what they could do and how they would look within our applications.”

The Volkslicht Zoom initially stood out for its high performance-to-budget ratio. Low power consumption and ease of deployment further sweetens the low budget projects, and Dave Barten readily admits, “As for physicality, in trade shows and ballrooms you’re hit with either low ceilings or 16ft height restrictions, and if you’re hanging a big mover it obscures too much of the sight lines.  Because these lights are small and bright they can really be superstars with 20% of the problems due to the low weight, size, and power draw.

“With the cost element, every pound of gear is charged so these advantages save our clients plenty of budget.  As for features, these will do a lot more than we will ever need them to in a corporate context.” 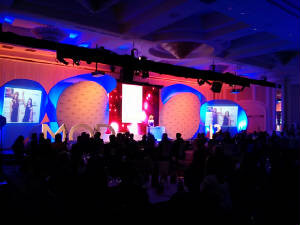 The GLP fixtures are fast and easy to rig with the Cosmic truss footplate or clamp options and general stand-building templates, he says. “The Volkslicht is so small it fits into header beams and ceiling structures quite simply. Being lightweight the stagehands can easily run up a ladder and install or grab a couple of fixtures and quickly hang them on the truss — leading to further big savings for clients.”

As for the impression Spot One, which Barten first acquired in December 2011, he concedes, “We are constantly evaluating, purchasing and turning equipment.  We have misfired once or twice in this ‘Holy Grail’ search for LED spotlights, but the Spot One has pulled us out of trouble.”