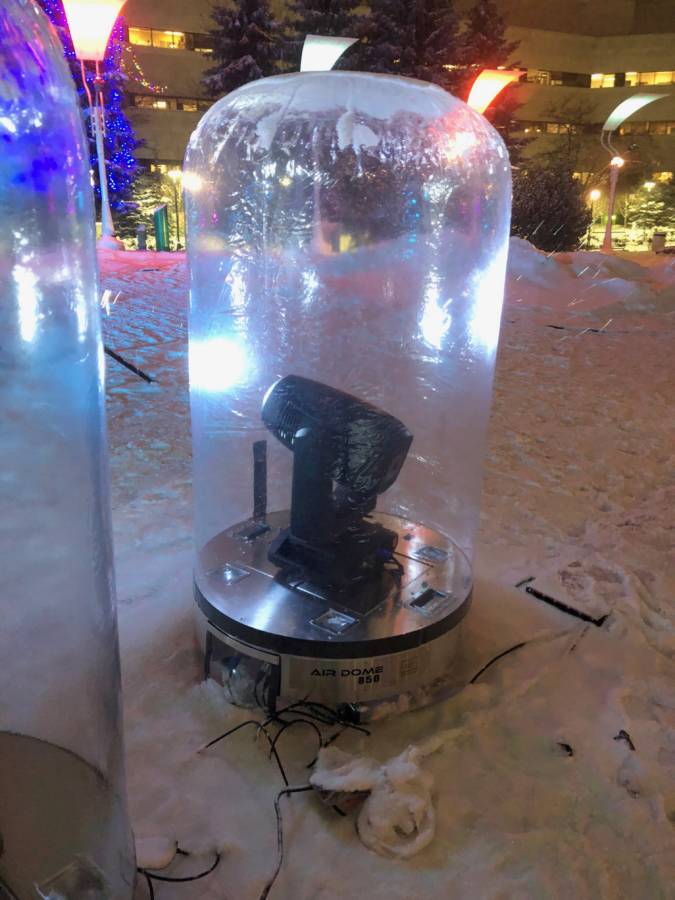 With the Winter season in full swing, Canadian production company, Ottawa Special Events (OSE), has increased the scope of its service to corporate clients by investing in 12 of GLP’s large Air Dome 850’s.

GLP Air Domes offer protection against rain and other environmental influences in various sized housings, with the 850 dome purpose-designed for larger moving heads.

They were supplied by GLP’s Canadian distributor, AVL Media Group who have been aggressively promoting both these, and GLP’s Rain Cover Kits into the local markets to counter the arduous conditions.

“We were looking at a product that was going to protect our fixtures and be rugged enough to withstand cold Canadian weather but also be user friendly and a breeze to install,” confirms OSE Production Manager, Joel Deslauriers. “There were other brands out there but the builds were not as well designed and price points were a lot higher than GLP’s which also made this purchase very attractive for us.” 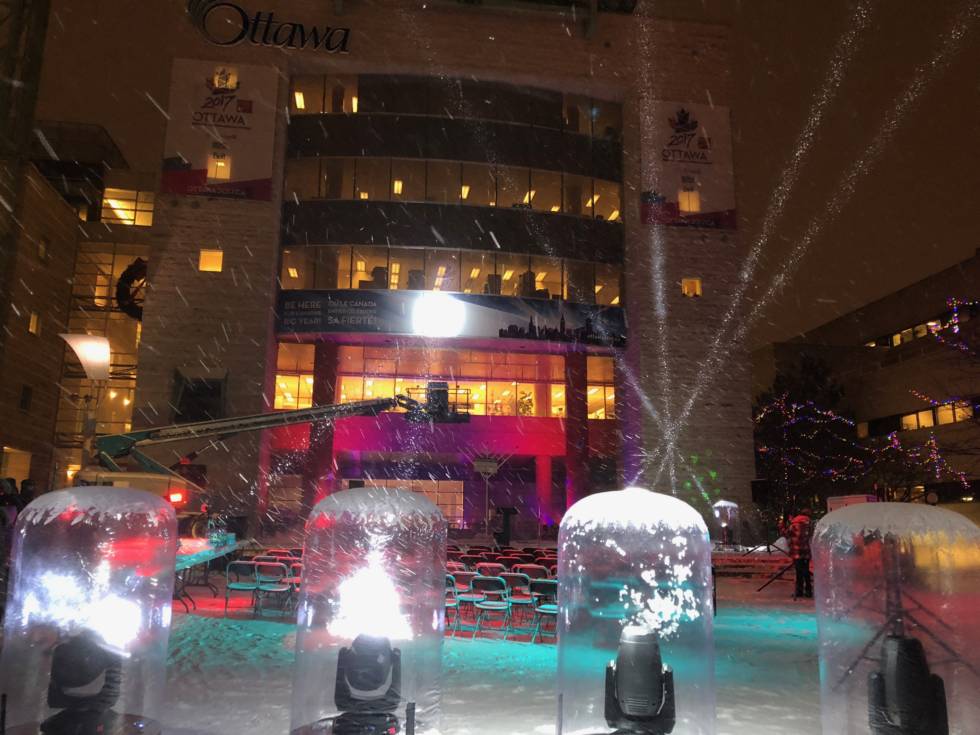 Consequently, they are delighted with their decision. “The build was very simple, which was key for quick setup and dismantle of the Domes. It was a lot more lightweight than expected, making it easy for one person to stack and unstack them for storage and transportation.”

OSE had been on a tight timeline to supply, necessitating AVL Media Group’s Claude Viens and Maxime Perreault to respond rapidly with information to enable the purchasing decision to be made. “We did full testing and inspection when the Domes arrived and filmed our marketing demo with them — which was also good training for our staff.”

Deslauriers explained that the 850 was the only Dome that could fit their larger Platinum HFX’s. “We could have purchased the Air Dome 600 for the smaller Wash fixtures we have in inventory — but investing our money in the 850s was the correct decision, as it allows us to cross-rent large quantities to anyone in the area who has any large fixtures. A further advantage is that we can fit out 6,000 and 10,000 lumen projectors and up to three smaller moving heads.” 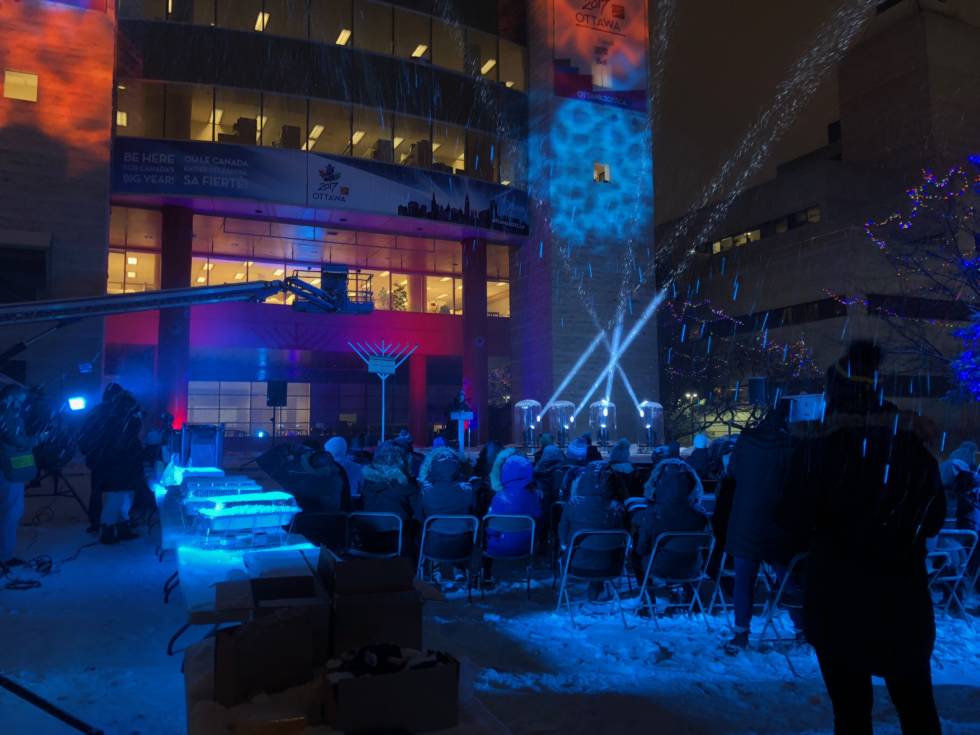 The Air Domes come with 3- and 5-pin XLR sockets for DMX as well as PowerCON In and Out for maximum flexibility. Solid rubber feet guarantee a secure stand on any surface, with several mounting points, including safety anchor points, for versatile use, while hanging is also possible with special accessory rails. The devices also feature sensor-controlled air pressure control, with separate mains switches for device and fan.

It has provided the company with an elegant solution, since they no longer need to build custom braces to fit certain pre-existing hardware on site, and have a plastic shield covering the bottom or top of the light. “In any case, this was not as efficient and only worked for small LED fixtures that did not generate any heat; but when using an arc or reflector lamp the heat produced by the lamp is too high to use outdoors without proper ventilation — even in average temperatures,” adds Joel Deslauriers.

And since they were consistently receiving requests for outdoor lighting design and building washes — particularly in the winter — they knew the time was right to invest. “In fact we had been thinking about this for a long time.” 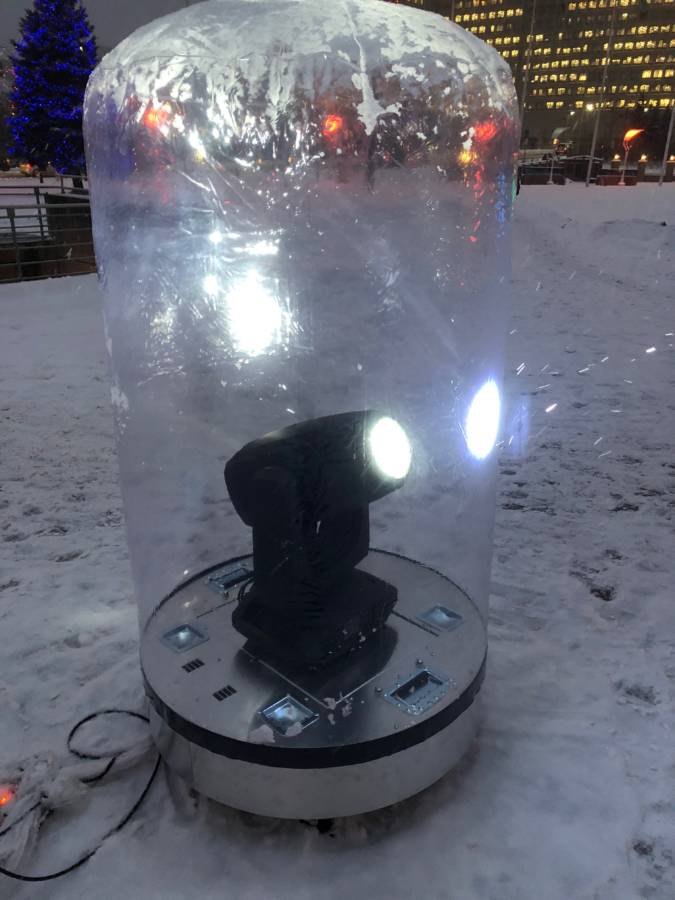 A key focus is the large amount of activity taking place around Winterlude 2018, Ottawa’s unique Winter festival. “Now that people have seen our marketing video for the Domes we are getting more and more demand for them, allowing us to increase our projected ROI,” Deslauriers confirms.

He is confident that the acquisition of the Air Domes will increase the company’s work scope, adding that although this is the company’s first dealing with GLP it is unlikely to be their last. “In Ottawa the weather tends to be sporadic and it could rain when you least expect it in the summer, while it snows constantly in the winter. Having the Domes will allow us to bypass this obstacle and have more creative freedom outdoors without having to build large covers or staging.

“We can be more creative with fixture placement not only for large events but also small events that just want some outdoor lighting effects without having a stage or dedicated performance area. There are outdoor Leko and static profile fixtures available to do outdoor gobo projection but having the ability to use a moving head to do that same job gives both us, and the client, more options to achieve their vision.”