The PBS National Memorial Day Concert, honoring the service and sacrifice of service personnel, has become an American tradition.  Co-hosts Joe Mantegna (Criminal Minds) and Gary Sinise (CSI:New York) were joined this year by an all-star line-up on the West Lawn of the U.S. Capitol, including dignitaries, celebrated actors and renowned musical artists, for a night of remembrance. 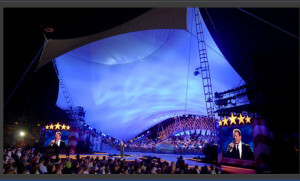 Staged by Capital Concerts, the nation’s leading producer of live patriotic television shows, in order to produce these large-scale live outdoor television events its staff are joined by a dedicated crew of hundreds of professionals. On the technical side these included lighting designer Bob Barnhart, of Full Flood Inc, and lighting director, David Grill, who chose large quantities of GLP impression LED fixtures in their armory of effects. These were all supplied by Martee Nuruddin at PRG’s Orlando office, along with the audio.

This provided an essential component of a specially designed stage and band shell including the complete infrastructure necessary to broadcast live in HD from the outdoor setting. However, this couldn’t prevent the show from being abandoned 40 minutes in, due to heavy storms (following the performances of Daughtry and Trace Adkins).

Featured in the rig were 40 of the impression RZ120 RGB Zooms, containing 120 Luxeon Rebel LED’s — providing an automated 10°-26° Linear Zoom. Like its forbear, the original impression 90, the RZ120 has no base unit, and so provides both weight and rigging advantages.

This was the lighting team’s first outing with the impression.  Stated Bob Barnhart, “There are many LED products on the market but their applications are not always interchangeable with the gear that has preceded them.  In this particular case we needed a color changing wash light that was small and fast — and this delivered.”

Twenty RZ120’s were placed on each side truss to illuminate the tent roof, providing an excellent color wash from a lower power draw. Barnhart also remarked on the efficiency of the primary color LED’s. “The GLP’s were a great improvement on what we have had before, from the stand point of color saturation and intensity.  One of the benefits of an LED product is that the intensity is not lost in the primary colors.”
Five weeks later, the same team also provided lighting for America’s national Independence Day celebration, A Capitol Fourth, on the same site — with PRG again responsible for providing inventory.

Hosted by Tom Bergeron (Dancing with the Stars) the television event features stirring performances from the country’s biggest stars of pop, country, rock and Broadway. capped by a rousing rendition of Tchaikovsky’s 1812 Overture, with cannon fire, and dazzling fireworks display.

Bob Barnhart and Dave Grill have been doing both events for 15 years — and know that with little time to program and design TV specials (and no commercial breaks during the show to allow the technical team to regroup), the collaborative relationship between lighting designer and lighting director is of paramount importance.  They were in agreement that the GLP LED units had been great for providing the color washes on the roof of the tent — and that the overall output of the individual primary colored LED’s had been extremely impressive.