When Ellie Goulding announced a short, six-date tour this autumn to promote her most recent album, Brightest Blue, the artist’s long-standing lighting designer, Cate Carter, started working on a design. 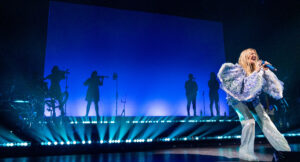 She had been looking into color-tunable LED sources with a CRMX receiver. Andy Scott from Lite Alternative, the designer’s equipment vendor, introduced her to GLP’s new Creative Light 1 Plus – the professional version of the company’s new wireless, battery-operated LED system. “I had been working on a highly theatrical and organic design and felt the Creative Light 1 Plus was too digital,” she admits. 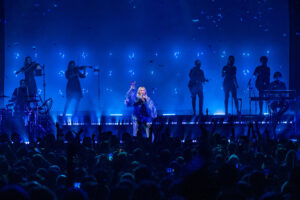 But when the brief suddenly changed to a cleaner, more eco-friendly solution, GLP’s new product suddenly ticked all the boxes.

“I went back to the drawing board, and based on the new brief I could see the [Creative Light 1 Plus] units would now be way better for this: … more minimal, slicker and modern,” she says. It would also be in accordance with Ellie Goulding’s role as a climate ambassador for the UN. 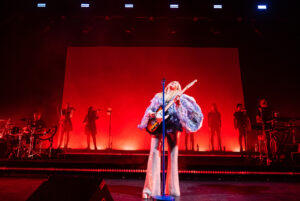 Her stage set would be based around a concealed video screen, which would form the centerpiece, set behind a cyclorama – which is where the 36 Creative Light 1 Plus units came in. “We needed to introduce an extra dimension between the two, so a grid of 36 of these fixtures are situated behind the cyclorama. We map them as individual light sources, using them as block fixtures, and the interaction between the light source and cyclorama creates a wonderful halo effect,” Carter continues. 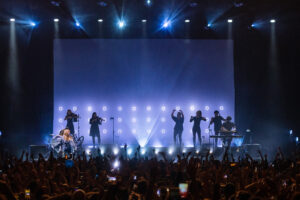 “By changing from an organic concept to something much cleaner, we are able to take specific messages from youth climate leaders and include these on a banner behind the cyclorama. The idea was to create a canvas where we could though provoking messages, referencing Ellie’s work as a UN environment goodwill ambassador. With the change in overall aesthetic, resulting in a cleaner and more minimalist scenic design – the geometry of the Creative Light Plus 1 is a perfect fit. 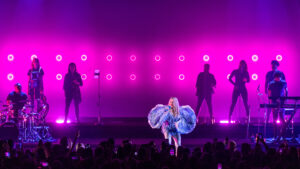 There are other benefits in using a wireless DMX solution such as the Creative Light 1 Plus in a smaller-production tour. “This tour features just me and a technician, so the fact they are battery operated and wireless meant much less work for just the two of us,” explains Carter. “They are lightweight and magnetic, which is brilliant because they are fast and easy to rig, and the fact they don’t require power distro is also perfect.” 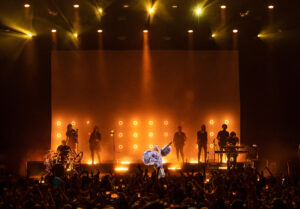 With 24 individually addressable RGB pixels, the fixture offers countless design possibilities, making it ideal for small-scale touring. Whether all pixels are used together, individually (via pixel-mapping), or via the integrated Double Layer FX engine, the visual effects are impressive. The integrated battery offers enormous power, with 10,000mAh, and the selectable power modes ensure an enduring performance of up to 24 hours. The Creative Light 1 Plus additionally features an integrated LumenRadio CRMX module, ideal for integration into an existing DMX network. 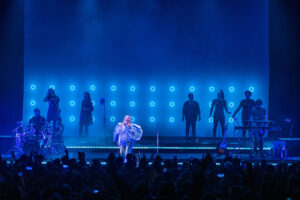 As for the Ellie Goulding tour, Cate Carter describes the Creative Light 1 Plus as “a fantastic fixture which has provided the extra dimension I needed.”