The MBL 40 was largely developed following an original inquiry from Winkler Livecom, explains Ronald ‘Roni’ Huber, head of technical development at the Swiss company. “We were looking for an LED floodlight that corresponded to an HQI 400 spotlight in terms of brightness. In addition, the luminaire needed to be suitable for outdoor use (IP65), have a flexible color temperature, be both manually operable and controllable via DMX and, of course, be attractively priced,” says Huber.

“This combination was actually not available on the market at the beginning of 2019,” he continues. “We then approached some manufacturers informally with the idea of ​​developing such a product – but the enthusiasm was limited. With Oliver Schwendke at GLP, however, we immediately received an open ear.” 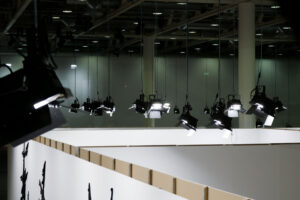 After that, things moved quickly. Barely a year after the original discussions, the first FUSION MBL 40’s were delivered to Winkler Livecom. In close cooperation with the customer, a tunable white LED floodlight suitable for outdoor use (2,700-6,500K) was created, which, thanks to its fanless concept, is ideally suited to general lighting use for trade fairs, events, shows, sporting fixtures and all other sound-sensitive areas.

The MBL 40’s integrated diffuser reduces glare effect and ensures a homogeneous visual output. As specified by Winkler, the most important settings, such as defined color temperatures and brightness, can be set manually on the MBL 40. For the installation market, the floodlight supports DMX512. Barndoors and a color filter frame are available as options.

According to Roni Huber, Winkler Livecom has found the perfect ‘all-rounder’ in the MBL 40. “The lamp does exactly what it should and is also affordable, which is vital for a product that is generally used in large numbers,” he comments. 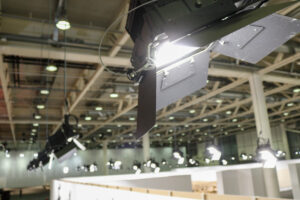 “I was also very impressed by the flexibility that GLP showed during the product development. At a dinner together, the idea of ​​an additional color filter frame then came up; the situation was similar with the optional barndoors, and both were implemented. I think that shows what makes the company tick. It was a partnership-based exchange at all times.”

So far, 300 MBL 40 have found a very broad range of applications in Winkler Livecom’s projects. “We were primarily focused on the trade fair business when we were originally looking for this solution. The first FUSION MBL 40 reached us shortly before lockdown,” continues Huber.

“We are now using the floodlights in a wide variety of projects. Most recently, we oversaw a festival on a floating stage. Here we installed the MBL 40 all around so that we could just make it really bright in the event of someone falling into the water and needing help. Even for university exams, which have had to be relocated to exhibition halls due to social distancing regulations, we used MBL 40 to ensure that these large halls were fully illuminated. And in general we deploy the MBL 40 whenever we need to implement outdoor lighting somewhere.

“The MBL 40 is exactly what we wanted – thanks to the GLP team, who listened and responded accordingly.”