Jazzopen Stuttgart has been one of the highlights in the event calendar of the Baden-Württemberg state capital since 1994. The recipe for success: Renowned jazz musicians and top international acts from the worlds of rock, pop, soul and blues performing on six stages spread across the city. With the help of 250 GLP moving heads, LD Jerry Appelt created optimum conditions for another glamorous show again this year.

Appelt has been working for the festival on behalf of the organizer, Opus Festival-, Veranstaltungsungs- und Management GmbH, for several years. In 2021 he was responsible for the lighting design for the two largest stages: on Schlossplatz, and in the splendid Renaissance arcade courtyard of the Old Palace. Between 10th and 19th September, artists such as Katie Melua, Element of Crime, Chilly Gonzales, Liam Gallagher, Parov Stelar and Amy Macdonald performed. 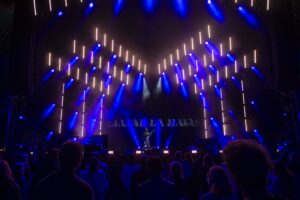 Stuttgart’s Schlossplatz, one of the most beautiful squares in Europe, offers an impressive backdrop for Jazzopen’s main stage. This first-class festival, therefore, requires an equally elegant stage look, as Jerry Appelt explains: “The Jazzopen is an absolutely top-class event, which can be seen by the impressive locations. The challenge for me as a designer is to create an independent, elegant look that can correspond with the requirements of the artists and their individual festival setups.”

The designer, who is a big fan of the FUSION Stick FS20, took the opportunity to combine 100 of the IP65 LED bars into a central perspective light architecture. Eight FUSION Stick FS20 were installed in three horizontal rows on six pyramid-like angled trusses. In addition to the central LED wall, three vertical lines, each consisting of four FS20, were placed on the left and right, while the front truss on the stage roof took another 16 pieces of the versatile LED bars. Above the large LED walls, situated on the left and right of the stage, six FUSION FS20 bars each formed the end pieces.

“On the one hand, the bars in this large display are used to create spatial lighting architecture,” explains the designer. “On the other hand, they can also be used very nicely as a light matrix and for blinder effects. The fact that the devices are weatherproof makes it easier to work outdoors, so that we didn’t have to worry about the unprotected hanging bars on the front truss. I really like the FS20 – thanks to the very good price-to-performance ratio, the devices can easily be specified in large numbers without breaking the budget.” 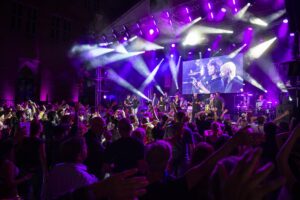 Appelt used 46 GLP JDC1 for additional room design and effects, while the HIGHLANDER Washes were the workhorses on stage, creating saturated colors and stage washes.

“At the Jazzopen there are always pop and rock acts who want to put on a powerful light show. In this respect, an ultra-bright hybrid strobe like the JDC1 is never out of place,” says Appelt. “The great thing about the lamp, however, is that you don’t have to extend it to the limit to make an impression. Thanks to the RGB surfaces, they can be used very atmospherically, slowly and discreetly at low intensity.

“It’s similar with the HIGHLANDER Wash: On the one hand, we were already operating in twilight and needed a lamp that would assert itself well in the remaining daylight. On the other hand, the more intensity that is available, the better I can use saturated colors to generate really dense, saturated looks on stage.”

24 FUSION Stick FS16 Z on Stage at the Old Palace

The designer also turned to GLP solutions to light another spectacular venue, equipping the stage at the Old Palace with 24 of the brand-new FUSION Stick FS16 Z. This further development of the FUSION Stick FS20 is an LED batten in a robust IP65 design, which can be connected seamlessly to FUSION lines in the true GLP fashion. A new addition, however, is the motorized 8°–40° zoom integrated into the compact housing. And with the halo diffuser ring around each pixel, GLP has unleashed a genuine innovation that reveals a new optical effect and significantly improves camera suitability. 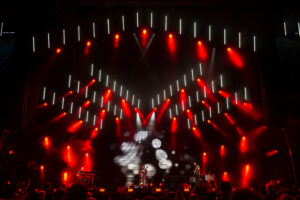 “The FUSION Stick FS16 Z had a similar role to the FS20 on the main stage, except that it gave us even more opportunities to play with the zoom and the halo ring. Incidentally, the latter is really a nice added value,” he notes.

GLP founder Udo Künzler is also delighted with the latest release from the FUSION series: “This proves once again that our development team has gone the extra mile in integrating customer requests into new products.