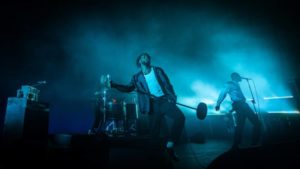 Exhibiting commendable stagecraft they delivered an incredible one off show at Brixton Academy, embracing an elusive and often unsettling blend between hip hop, pop, industrial and electronic music. 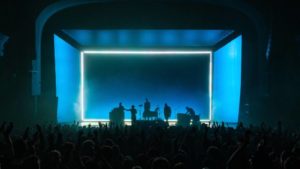 The dynamic was enhanced by lighting versatility provided exclusively by GLP in the form of 30 hybrid JDC1 LED strobe/wash fixtures and 48 of the impression X4 Bar 20 wavers / cyc lights, all supplied by Christie Lites.

Once again the vendors joined forces with the creative team of Phil Kaikoura and Andrés ‘Argy’ Atkinson, a partnership which according to the equipment vendors’ account manager, Roy Hunt, they enjoy working with immensely.

This was the band’s first full production tour which sent Kaikoura and Atkinson into pre-viz at the latter’s HQ, using WYSIWYG. While Kaikoura was responsible for the overall design concept, the two men co-designed the lighting, and while Atkinson set to work on the programming and time coding for Young Fathers, Kaikoura turned his attention simultaneously to Mumford & Sons, with whom he was touring.

Drawing its inspiration from the band’s iconic Roundhouse show in March, with its massive 24ft x 15ft fast fold screen forming the backdrop, they clad four sides in sail cloth to create a cubic, forced perspective concept, in which the three members themselves performed on the stage apron. It was an ingenious distillation. 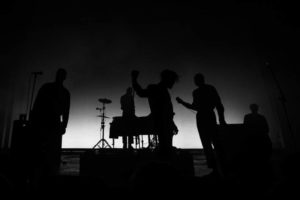 Explained Phil: “The key was to create stark contrasts which was why we chose a set based on plain sails and big surfaces. The 4 sided cube was based on distilled version of the big surfaces we used at the Roundhouse. The stage feel begins in a theatrical form behind the pros arch, but we decided to force the whole show downstage and for the three members only to be on the apron.”

They deployed 25 JDC1s projecting behind the screens to create starkness and a forced perspective to add depth to the shallow stage. The band’s manager, James Stanson, inspired by the shadow effect design for David Byrne, prompted Kaikoura to use three further JDC1s downstage to create similar strong shadows. The JDC1s rear projecting behind the screens were run in normal 23 channel mode and the three creating the big mono shadow effects, positioned in between the wedges, in high resolution 68 channel mode. The 48 X4 Bar 20s were assigned equally to the four sides, 11 top and bottom and six for either side. 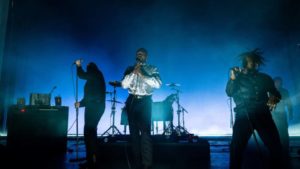 Argy, who operated the show from a grandMA2 with MA onPC Command Wing and Playback Wing, running nine DMX universes, first fell in love with the GLP portfolio back in the days of the original Impression 90. “Even then it was miles apart from the competition,” he said.

Of the JDC1, he stated: “This is one of the most striking fixtures I have had for a long time — they just deliver so much. I’ve always liked the way the colors fade and the way they interact. 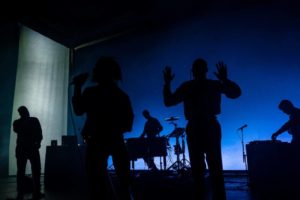 “As a strobe fixture, I think it is superior to conventional xenon strobes because there is no decay. It’s amazingly bright — and it is so versatile. In fact, there are many elements I have still not had the luxury of using.”

Phil Kaikoura is equally a fan of GLP’s signature quality. “I love GLP’s LED fixtures,” he said. “They are incredibly well built, well thought out, consistent lighting fixtures with excellent colors and light output, which are the backbone of all my designs.”

Christie Lites have worked with the two lighting designers ever since opening up in the UK and have been a constant with Young Fathers. The former Mercury Prize winners had previously supported Massive Attack (the two bands share the same management in Marc Picken and James Stanson) in the summer and when the album tour picked up again in America it was also with Christie Lites.

“The rig was flawless,” observed Roy Hunt of the Brixton show. “We are finding both the JDC1 and X4 Bar units are increasingly popular, and while our inventory is large enough to handle almost any request, demand is still growing.”

Argy Atkinson said the show had been given a resounding thumbs up from both James Stanson and the production manager Nick Lawrie — as well as the 5,000 ecstatic fans. “The whole show was fantastic,” he said. “It couldn’t have gone better.”