A week before the German federal election, the final TV debate took place between the candidates for the chancellorship, Annalena Baerbock, Armin Laschet, and Olaf Scholz. For the broadcast by ProSieben SAT.1 and Kabel Eins, Jerry Appelt created a 360​​° lighting design with GLP impression S350 Wash and Spot, X4 Bar, and X4 L, making it suitable for all cameras. 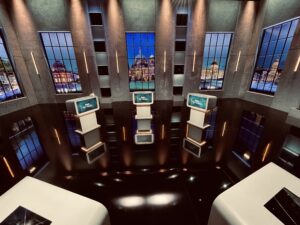 The designer was tasked with using an already partly existing set for the debate, while at the same time making it stand out from previous events in the 2021 federal election campaign.

The 360​​° design, divided into a main area and a spatially adjoined analysis set, brought with it some challenges, as Appelt reports: “The five participants stood facing each other, as is usual at such events, in a circle, which is why there had to be an unrestricted view from all directions and perspectives. In order that no other camera was ever visible in the broadcast, we worked with hidden cameras and discreet drop cams. The set wasn’t particularly spacious, and so the GLP S350’s were a good choice here because they are relatively small and light.” 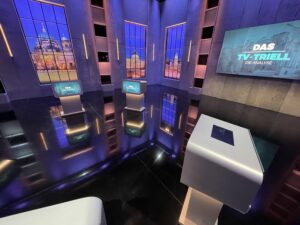 While the S350 Wash showed its strengths for lighting the personnel, the S350 Spot not only provided backlighting but also partially the decorative lighting. Further decorative lighting was achieved with the X4 L and the X4 Bars, which also illuminated the opera foil in the background. 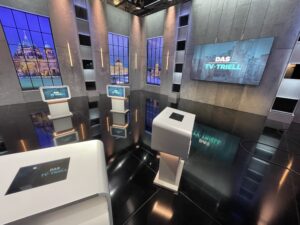 “The lighting of the candidates with the S350 also worked excellently on this project,” confirms Appelt. “These units are so quiet that you can work really well in a confined space in a closed studio. From my point of view, they are the modern workhorse to project technically clean light. They are small, compact, elegant, quiet, and bright for studio applications.