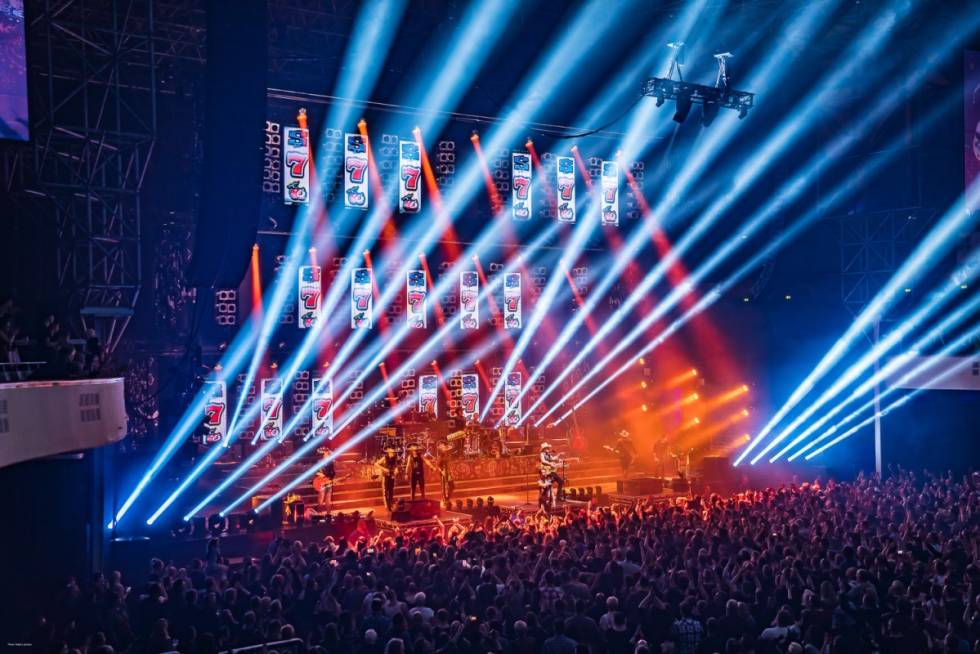 Over the past 15 years, country & western oriented band, The BossHoss, seems to have built its reputation effortlessly. This Spring ‘The Magnificent Seven of Rock’ returned with their eighth studio album ‘Black Is Beautiful’. And from March to early April 2019, the so-called ‘Spree Outlaw’ saddled up their horses for the accompanying tour through Germany, Austria and Switzerland. In the intensity of their live shows, the band once again celebrated their skilful mix of country, rock and folk, often performed with a twinkle in their eye. 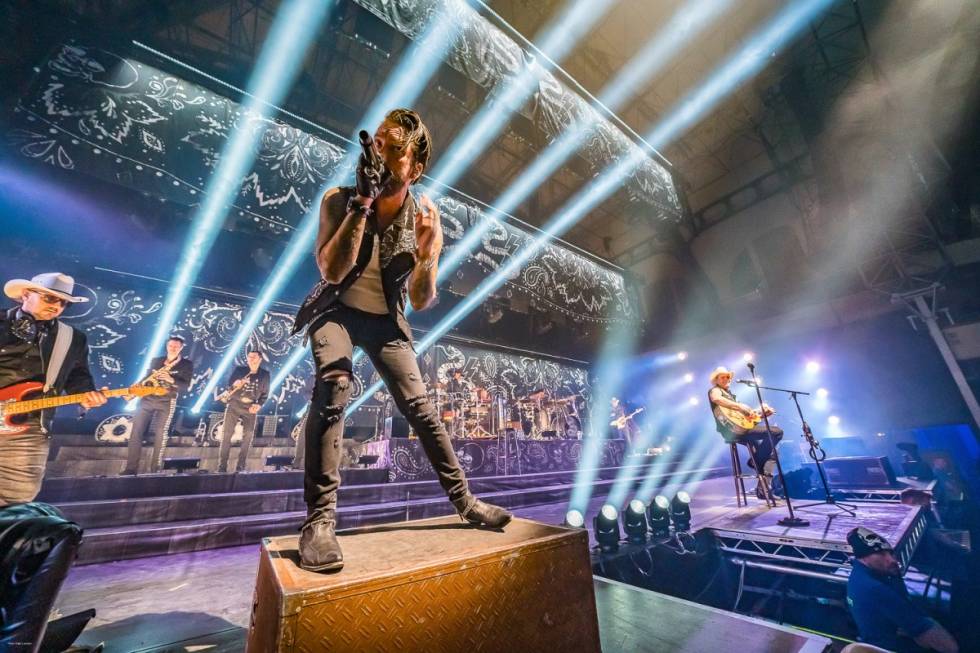 mdc licht.gestalten. GmbH & Co. KG from Mettmann was responsible for the lighting, video and set design of the tour as well as the programming of the show. The lighting design was created by the company’s own Jonas König, who also accompanied the tour as an operator.

The design brief was typical BossHoss: a classic rock ‘n’ roll stage with plenty of unconventional elements, in which a variety of different looks could be created. “The stage didn’t want to be too ‘clean’, but at the same time had to be able to carry the rock ‘n’ roll feeling,” recalls Jonas. “Accordingly, the show needed to look ‘big’ and create a ‘wow’ experience in every venue.” 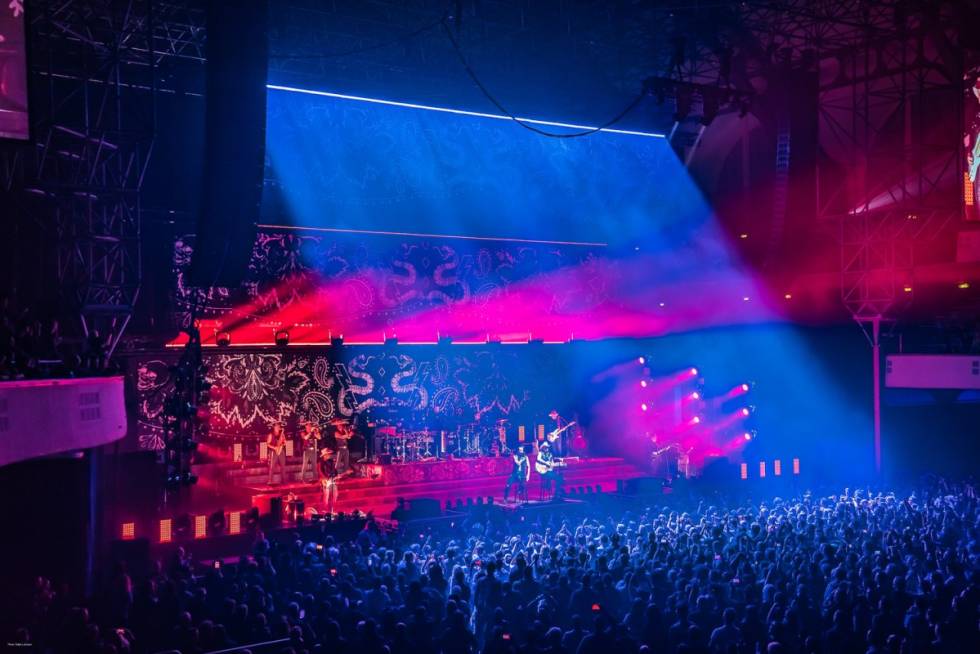 He approached this concept via a stage that was initially shrouded in black curtains; these parted to reveal the arsenal of installed lighting technology gradually during the show, with surprises guaranteed. The fairly classical front / middle / back truss arrangement was broken up by large distances in between. All lighting and video technology was housed within the trusses. In order to be able to reveal the effects gradually, the trusses were covered by 10ft high and 60ft wide banners, which could be opened with the help of motorized curtain rails. Behind the curtains, a matrix of PAR64 six-light fixtures emerged, interrupted by narrow strips of LED—so as not to be entirely ‘old-school’. 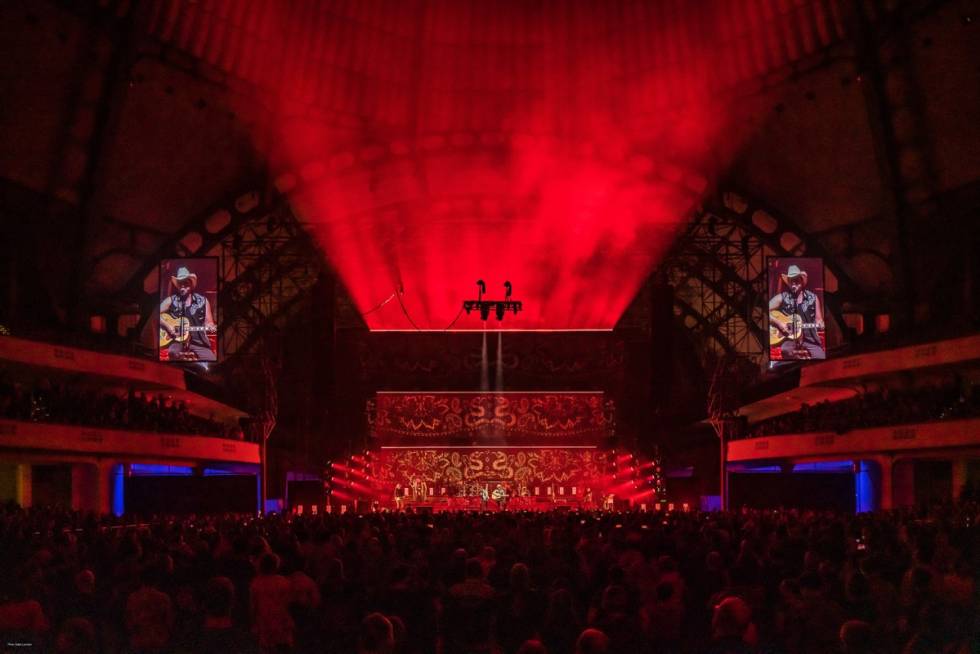 As for the GLP effects, Jonas used 20 of the compact, extremely versatile GLP impression FR1 as a ‘flower box’ on the front edge of the stage. With these he created the complete light show for support act, Seasick Steve. During The BossHoss set, the designer focussed the lighting primarily on the stage. Six further FR1’s performed their duty in the front row, while also providing highlights on set elements in the rear stage area. In some instances, they were merely to demonstrate the strength of the beam. “The output is just awesome given the size of the devices!” enthuses Jonas. 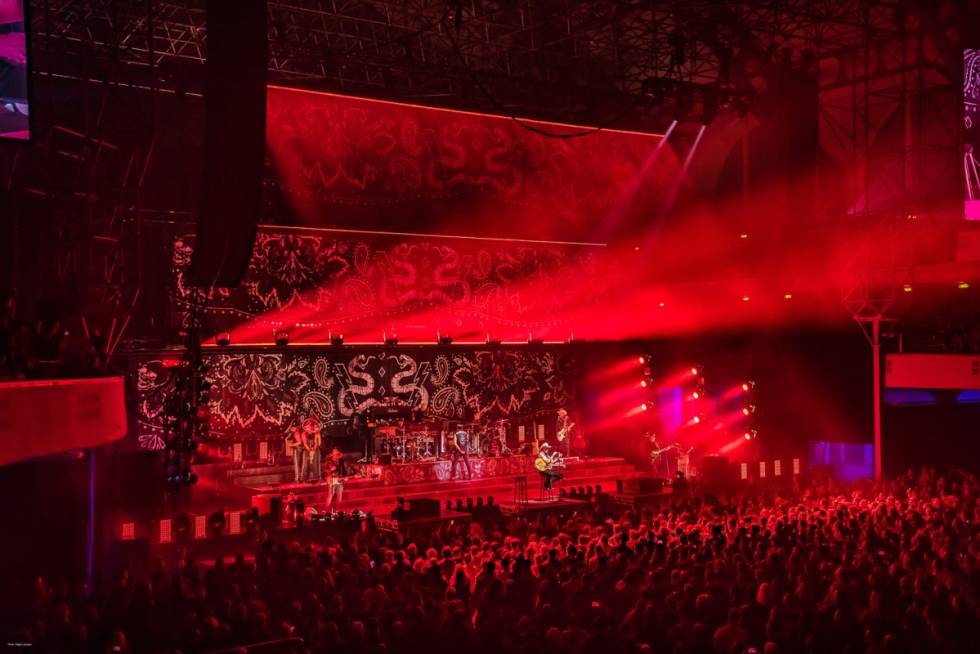 “I have worked with almost all of GLP’s products over the years, and only the FR1 was new to me,” he continued. “During the test setup, these small lamps created a few smiles on the technicians’ faces. The stage was really big … and when the show started, there were doubts in their eyes. But given its very small footprint, it’s really surprising the power that comes out of it. In addition, the FR1 can be used very flexibly with the zoom.” 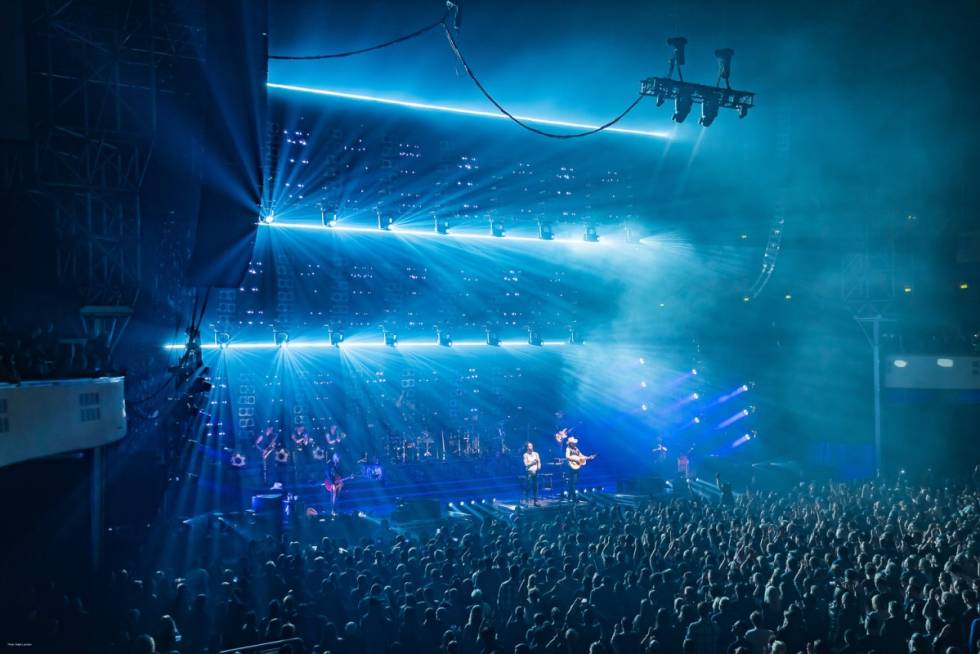 The floor package comprised 20 GLP GT-1, each arranged in groups of five, which were used throughout the show as workhorses and made up a large part of the light show. “With the GT-1, I drew a lot of symmetrical beam looks and gave the stage a very modern look,” reports the LD. “The GT-1’s are great for big venues. The beams were really powerful and were a real asset to the show. Even in red tones, and with an open zoom, the lamp still has a lot of output. Of course, this hybrid is also a very flexible tool thanks to the huge number of features.” 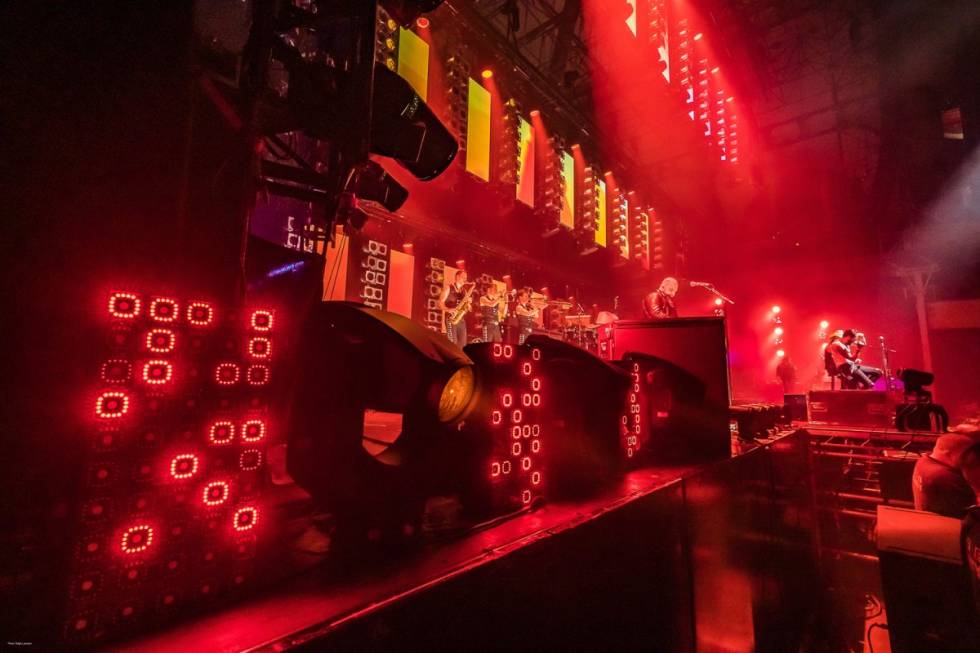 Although designed as a rock ‘n’ roll show, there was not a single conventional strobe on stage. Instead, 46 KNV cubes were installed in the floor set, in sets of two, as well as in the gaps in between. Jonas, along with GLP Key Account Manager Olli Schwendke, met last year for a KNV demo, when the idea came up to specify the KNV system for The BossHoss. Here they served mainly as strobes / blinders, but also gave different ‘eye candy’ effects. “The KNV’s are just brutal,” Jonas continues. “The look of the devices is modern and has refreshed our set nicely.” 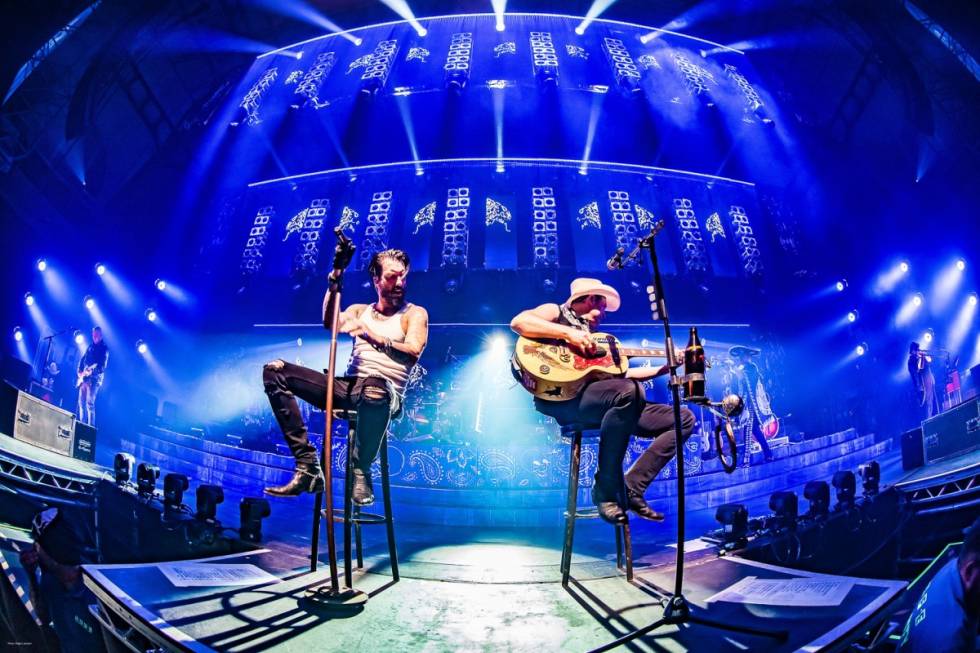 With 48 impression X4 Bars, the designer first illuminated the curtains, which initially covered the stage, and later played them as effect lamps during the show. 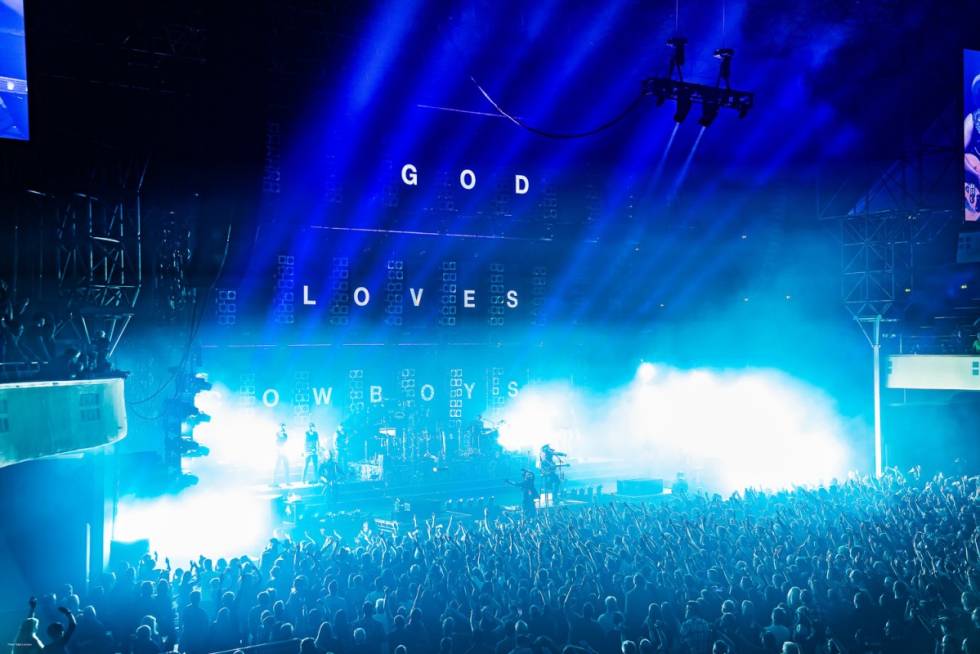 Technical service provider for the tour was Black Box Music Berlin. Working alongside Jonas König as LD / Operator, Alex Erdmann, Marcel Kirchhof, Hendrik Stark, Felix Wintergarten, Florian Reincke and Jan Schneider took care of all technical lighting issues. The video was supervised by Tino Schilke, Kevin Paap, Benedict Hirsch and Johann Börner. The video content for the shows was also designed by mdc licht. created in close collaboration with Jens Probst. Roger Ulbrich accompanied the tour as stage manager, while Roland Beckerle was the production manager. Lukas Fischer was responsible for the set construction and the many curtains were in the hands of Dirk Schindler.