Hundreds of GLP’s JDC1 hybrid strobes were deployed by lighting designers Mat Stovall and Trevor Stirlin Burk at the new Pudong Football Stadium in Shanghai for the League of Legends World Championship 2020 Finals—the pinnacle of the eSports community and the concluding event of the season. 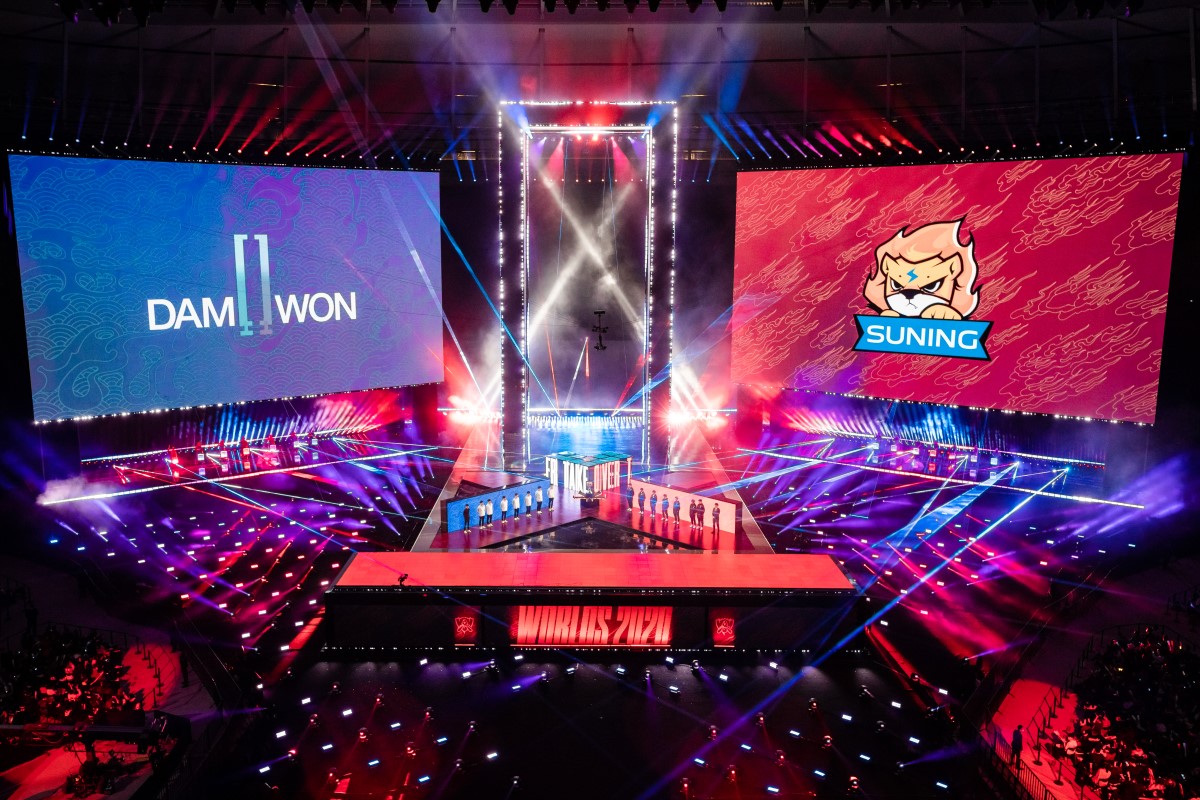 Organized by Riot Games and ConCom Inc, the event took place on a massive scale. ‘The Worlds’ was broadcast in 16 languages and across 21 platforms setting a new record; an indicator of eSports’ increasing appeal.

The live event saw 888 active JDC1 heads in use—corresponding to a lucky number in Chinese numerology. All pieces were sourced from Christie Lites, and were supplied via main contractors, CT Asia Pacific. Christie Lites’ account executive was Robert Roth, and senior project manager was Bobby Braccia; both worked closely with CT Shanghai’s Aaron Ross Durdin and the rest of the CT team to facilitate the visions of the designers. 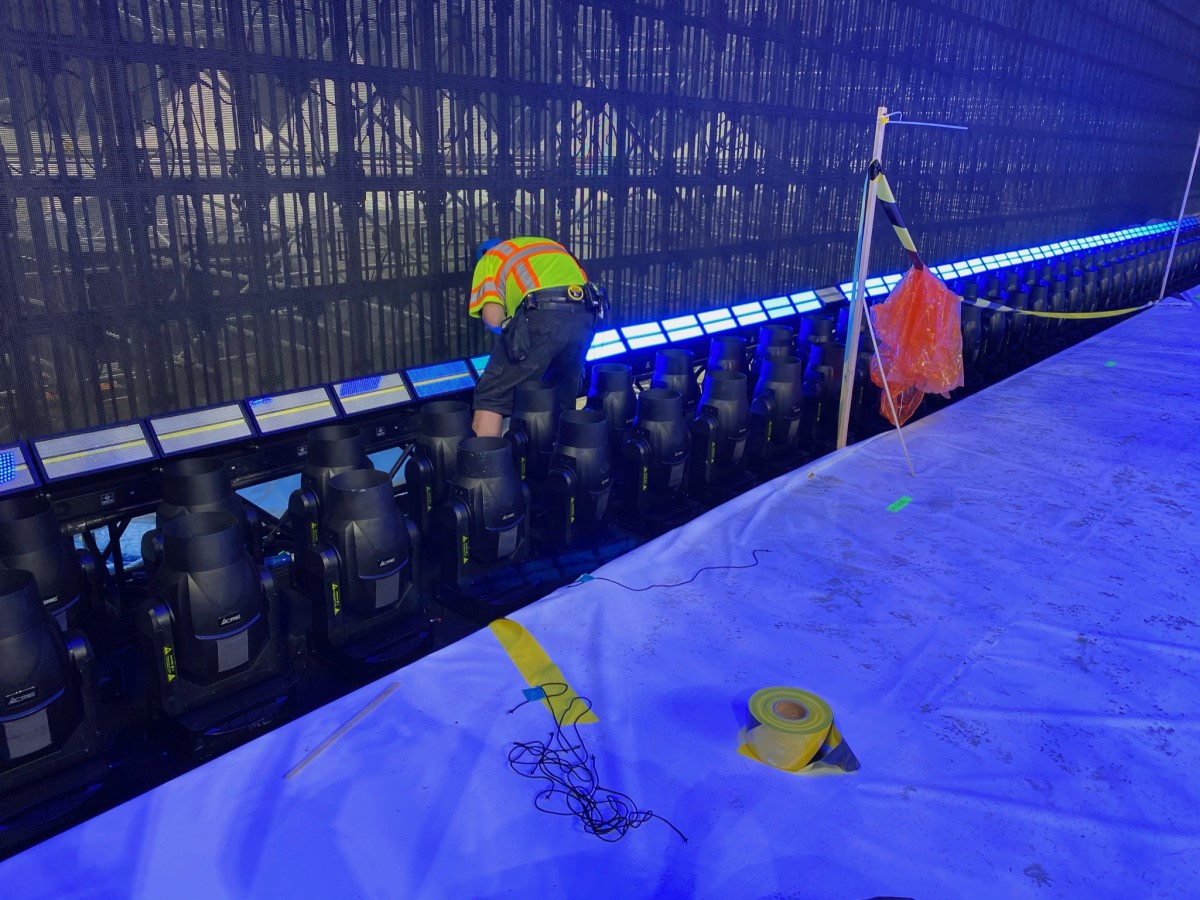 Most notably the versatile JDC1’s were used during the spectacular Opening Ceremony to highlight a giant free-standing, 33m high, 65-tonne Paifang (traditional Chinese architectural central arch), fabricated by Star Live. They also back-lit two giant 18m x 32m LED screens, on which the gameplay was displayed. Finally, they formed the centrepiece of a rectilinear, so-called giant ‘poppy field’, interspersed with beam lights in the 33,765-capacity arena (socially distanced for a maximum of 6,000 people).

Stovall and Burk explained that, given the constraints placed on them by Covid-19, Riot strives to create a unique show every year and even with the obvious challenges, that goal remained the same. This was Stovall’s ninth year at the event, working alongside Opening Ceremony director Sam Wrench. He stated that massive safety precautions had been taken. “There were 24 competition teams from all over the world taking part, and like most productions we were all wearing masks. There was regular testing and a two-week quarantine before starting work, as mandated by the Chinese Government.” 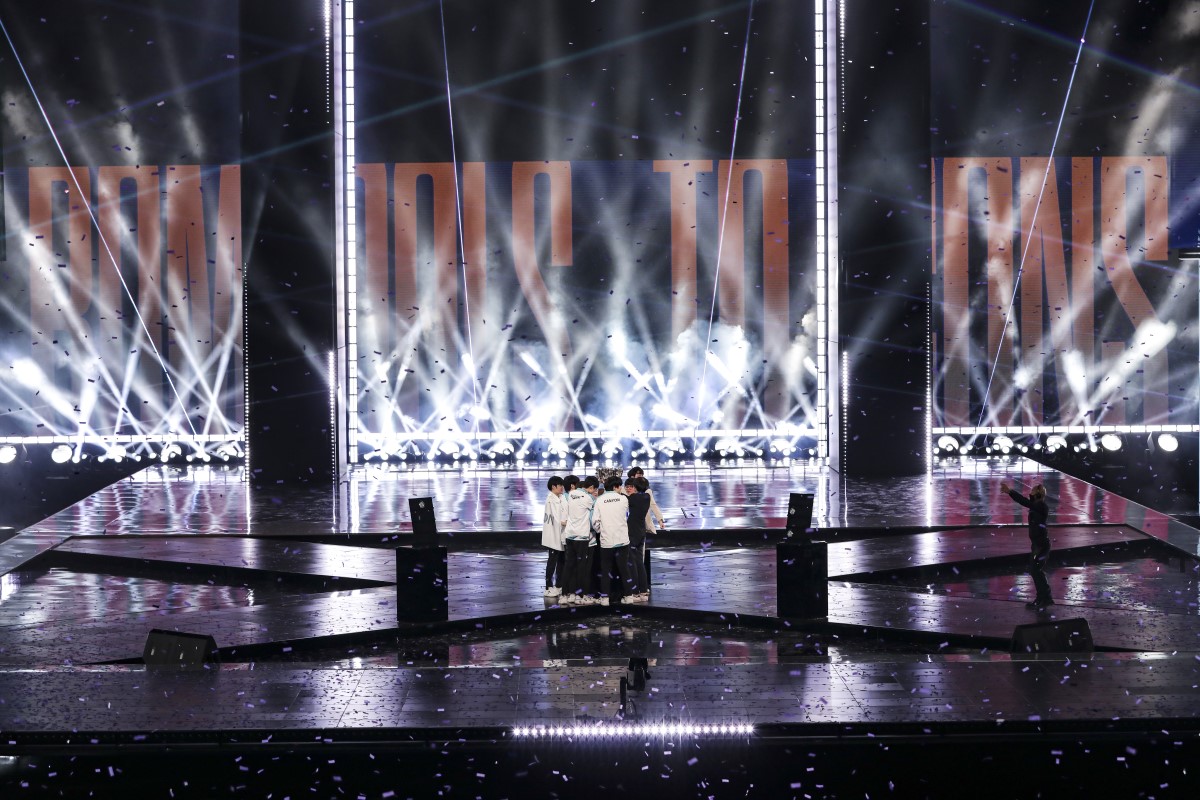 The ceremony itself was split into different parts, opening with K-pop group K/DA performing via augmented reality, followed by a medley of anthems from past Worlds events. At the end, as the players were introduced, a virtual, towering version of League character Galio — known as the stone colossus — appeared on stage. The whole rig was used as the main story unfolded, running into a reveal of the players, and then going into the championship gameplay itself. 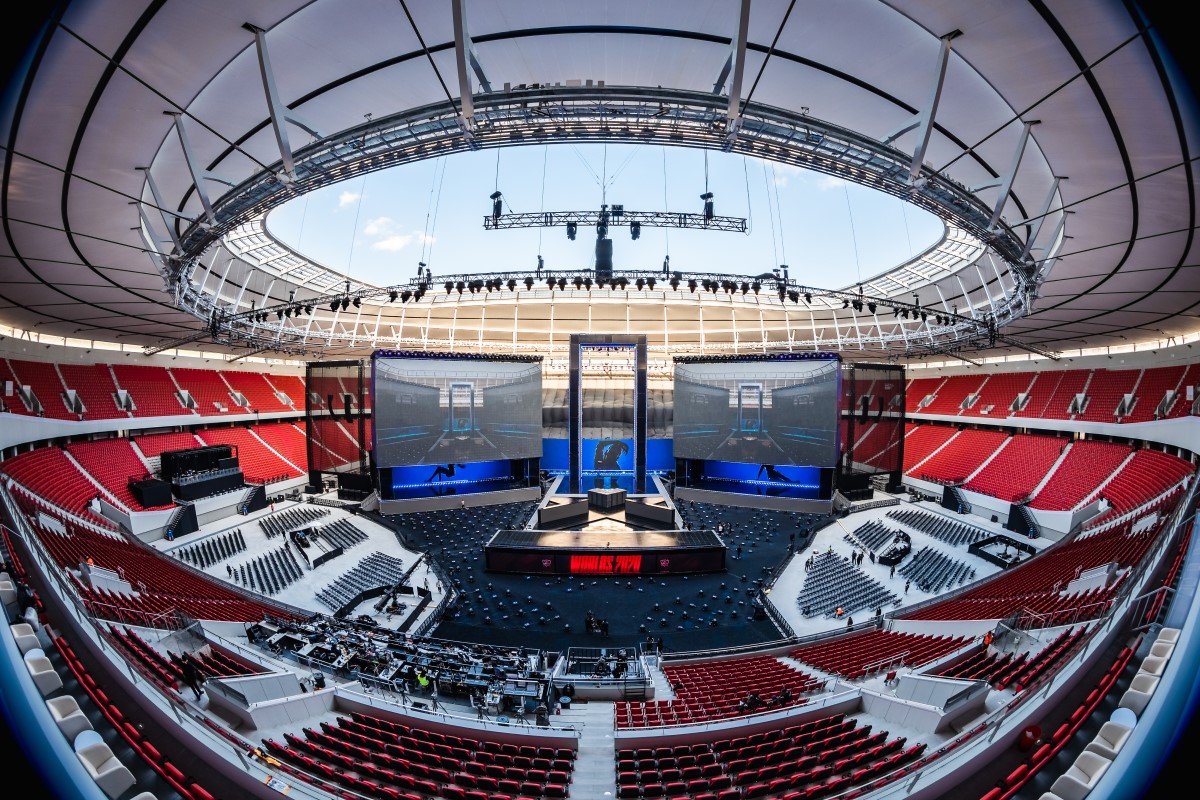 Although the design went through several iterations the large creative canvas of the JDC1 hybrid strobes had always been central to the creative dynamic, according to Stovall. “We fixed on the JDC1 before we could commit to the rest of the rig. I knew they would really define the show.”

To give an idea of the JDC1’s versatility, each module contains a traditional single tube element with an incredible clear, bright white output and combines that with a surrounding full face of RGB LED power, utilising 1,320 high quality LEDs. These two elements have independent control and can be used as separate pieces or combined for stunning effects. Along with working as a powerful strobe light, both the tube and the full-face sections can be run continuously for high output blinder and wash light effects, while the RGB face can be divided into 12 separate ‘plate’ sections, and additionally the bright white tube also can be divided into 12 sections and then the whole array can be fully pixel mapped. 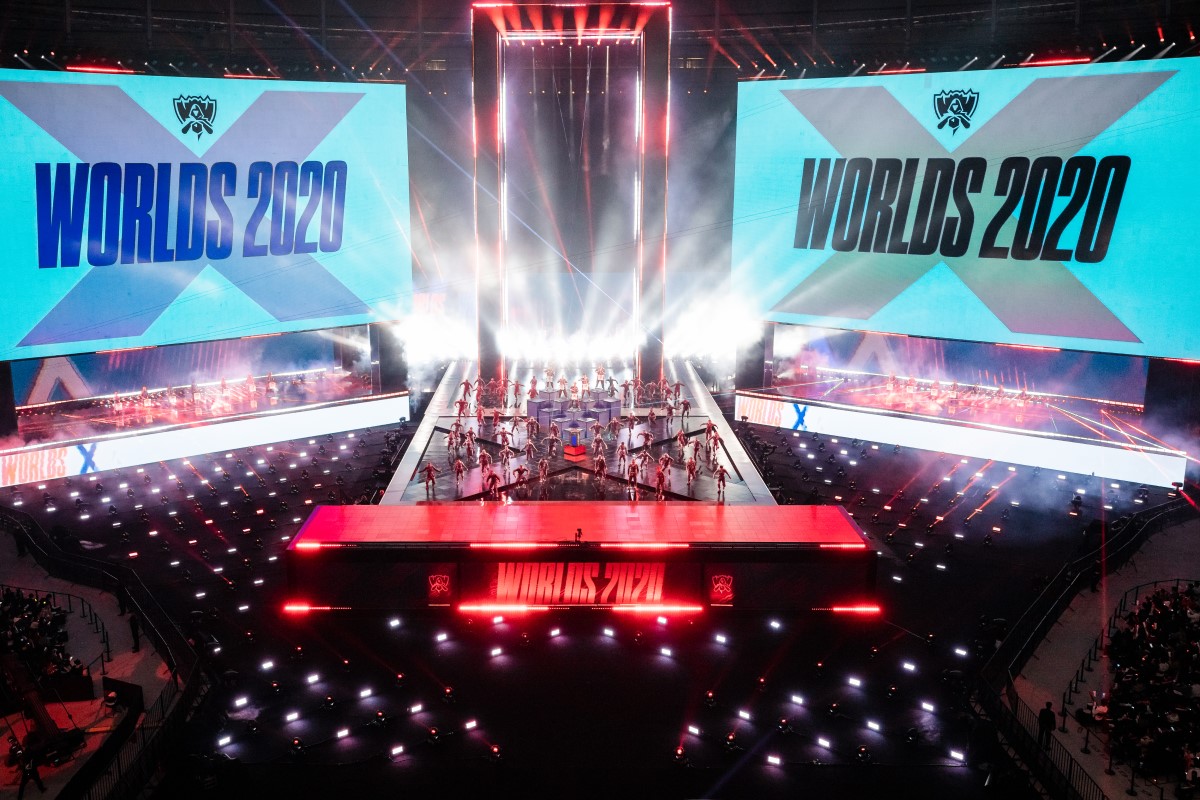 Of the 888 JDC1s used, 540 were distributed across the deck, with the remaining 348 lining the arch. “We had lots of Chinese variant products in the rig, but we insisted there should be no substitute for the JDC1,” confirmed Burk.

The two men admitted that the JDC1 had been their creative entry point. “It would have been easy just to throw gear at [the production] but we were tasked with making the event more of a visual vocabulary with linear sheets of light. The versatility of the JDC1 helped us restrict the number of different fixture types, as we could utilize either the strobe or the pixel elements.”

The show had already been a number of months in development by the time the lighting team came onboard. “We had to develop our design quickly,” said Stovall.

“Trevor and I started immediately after 4th July weekend. We needed to set rules and stick to our core principles on a set this big.” 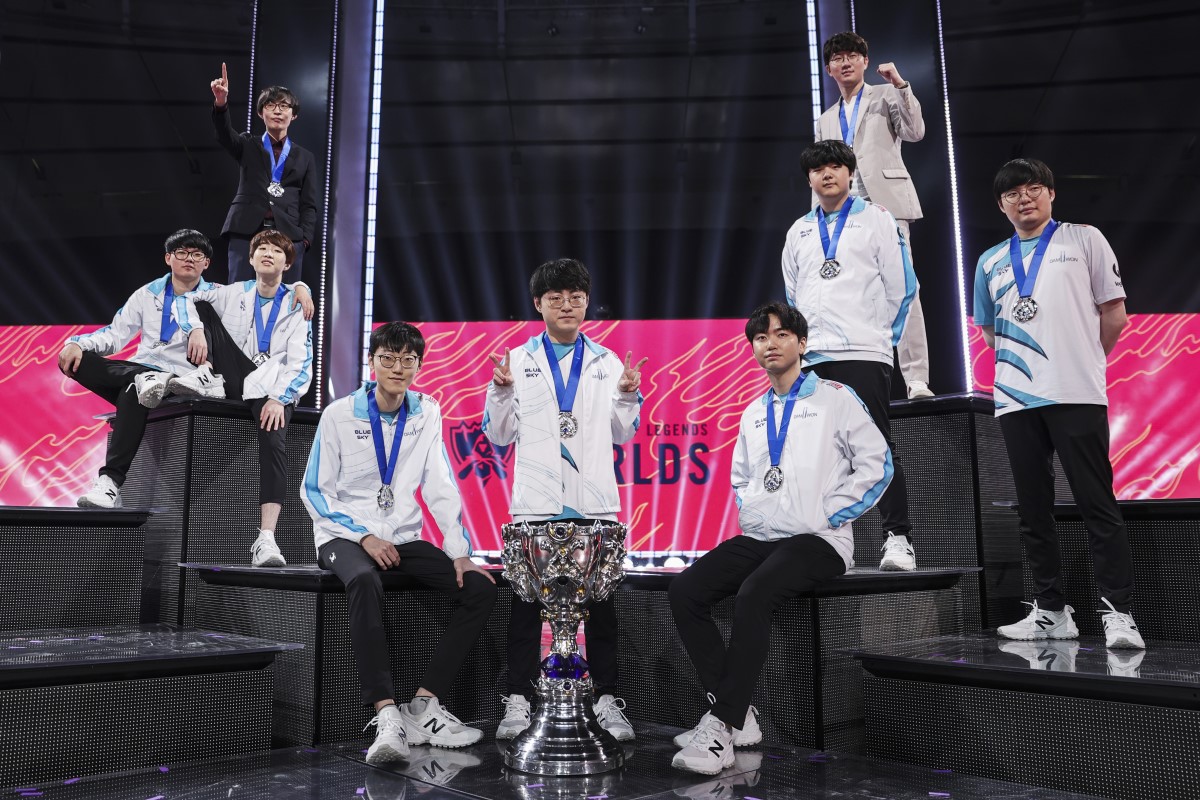 In the case of the poppy field the versatility of the JDC1, in conjunction with a high wide camera meant that any effect could be left for the audience or flipped for the camera reverse shot. “The JDC1 was bombastic but at the same time elegant in a way that only this scale could represent,” Stovall said. 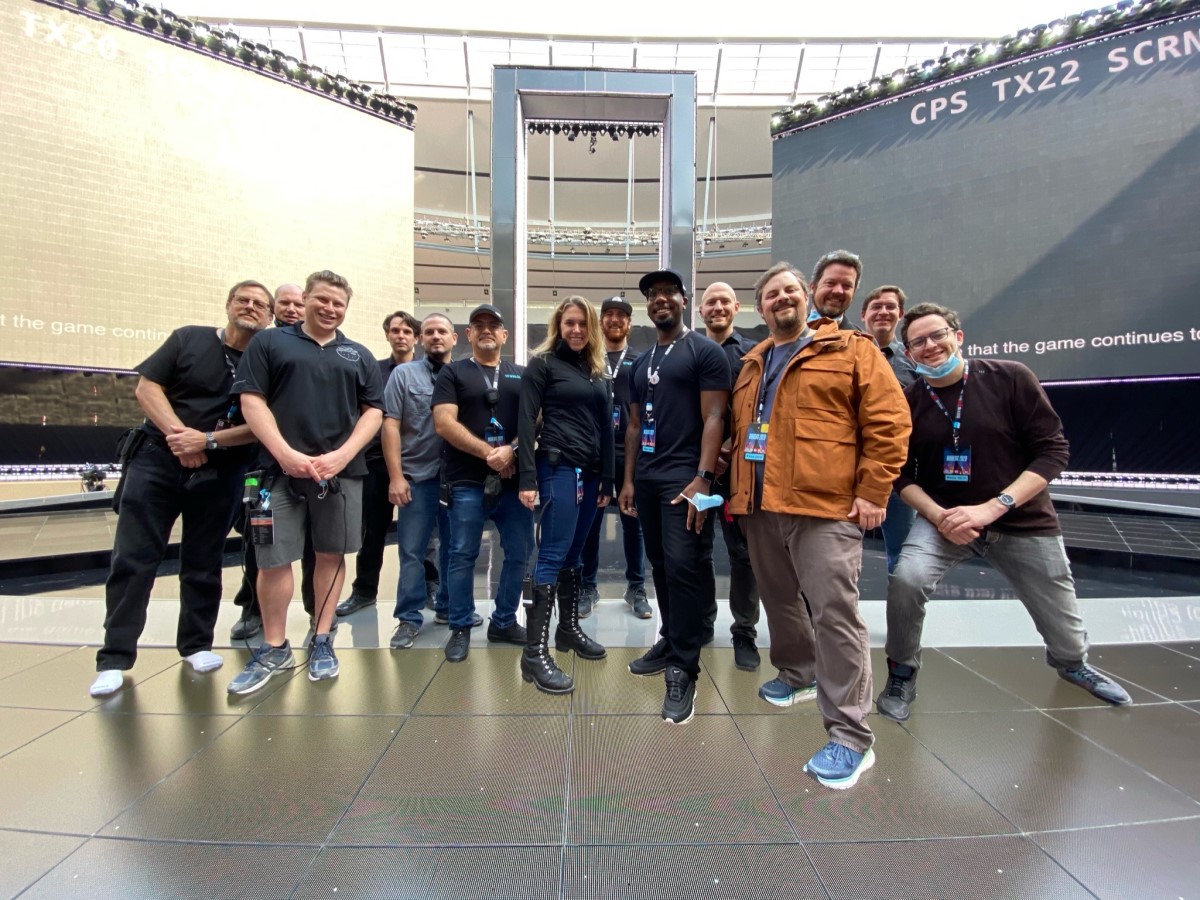 Another key person was Zach Matusow, who had been lighting director for the lead-in tournament and called spots for the championship stadium show. Confirmed Stovall: “Because there were so many uncertainties, we chose someone who we knew would be able to take on multiple roles. He was assistant lighting director, but when my gaffer got his visa delayed Zach took over as gaffer for the playoffs as well as running the follow spots.”

Both Stovall and Burk are no strangers to deploying GLP solutions. States the latter: “The X4 Bars are a crowd favorite and I also do a lot with the FR1’s. As for the impression X4, they are workhorses.” And his colleague agrees. “The Bars and FR1’s are great, and like the JDC1 they are a blank canvas.” 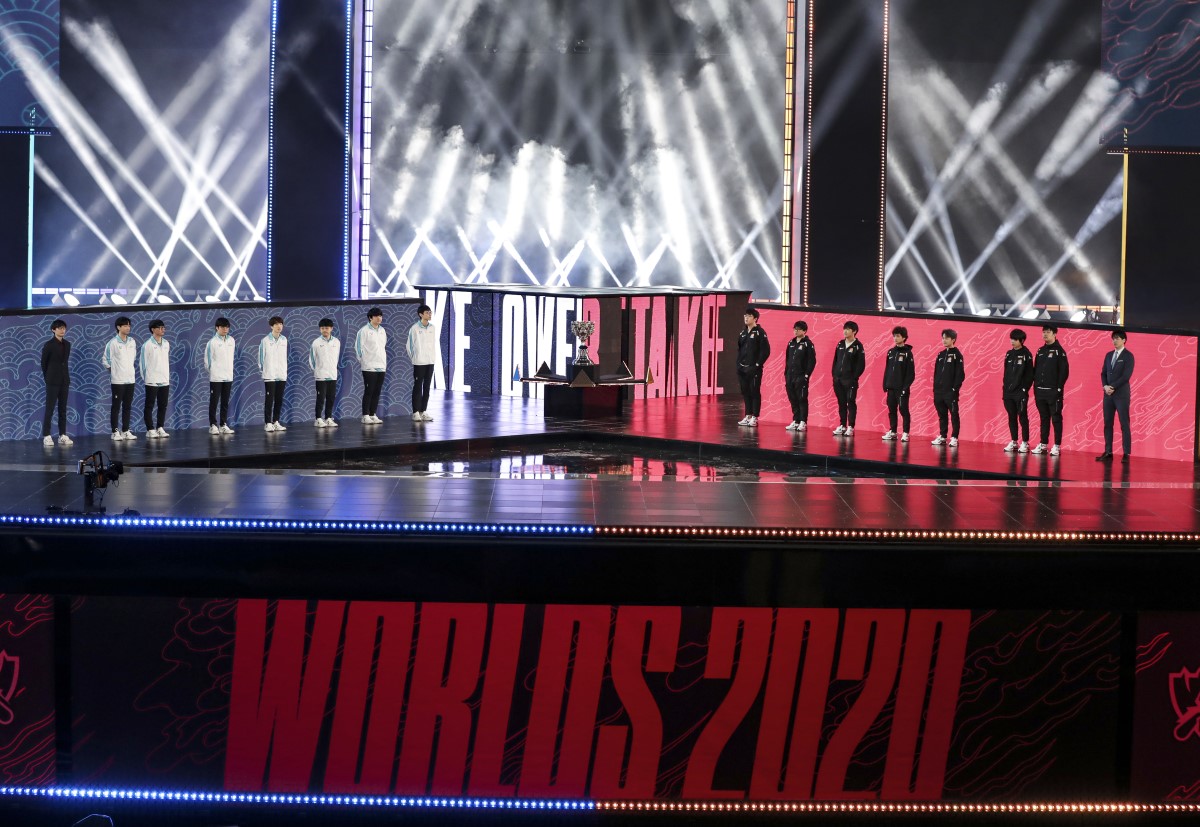 The designers confirmed overwhelmingly that their faith in specifying so many JDC1’s—and refusal to accept locally produced substitutes—had been fully justified.

As for the event itself, there may only have been 6,000 people admitted to the arena but this year’s viewership stats for the finals revealed an Average Minute Audience of 23.04 million and 45.95 million Peak Concurrent Viewers. There were over 1 billion hours of competition watched over the course of the entire tournament.