What was billed as one of the largest music festivals in the world, out in the Saudi desert, also broke new ground for GLP, as 360 of the new JDC Lines were used by lighting designer Sam Tozer for the first time on a single stage, at the massive MDLBeast Soundstorm EDM event. 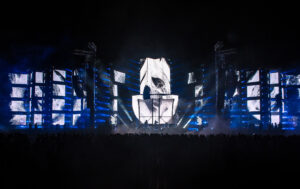 Set over four days on a 120-acre site outside Riyadh, the event was graced by over 150 world-famous DJs‚ including Armin van Buuren, Charlotte de Witte, Martin Garrix, Steve Aoki, Tiësto, and Deadmau5 – and an audience of over 700,000. And Sam Tozer’s Vision Factory were responsible for lighting four of the eight stages.

Equipment vendor Colour Sound Experiment topped up its GLP inventory by acquiring a further 100 JDC1 hybrid strobes for the occasion. But it was the JDC Line 1000s that were foremost in MD Haydn Cruickshank’s mind. “We supplied 360 of them,” he reports. “I really like the JDC Line, and since it is related to the JDC1 that we already had, it was a safe bet. Sam was on board straight away.”

Colour Sound handled the lighting, video, and rigging aspects of the production in the four Underground stages at Soundstorm, working closely with MDL on the engineering and structural requirements of the Underground area, which was constructed of nearly 1,000 shipping containers. 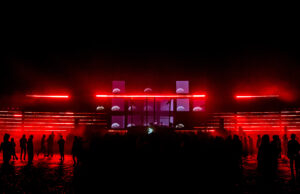 Vision Factory was also heavily involved, helping to create four unique venues that represented the nightlife culture within Saudi Arabia, each within one of the shipping containers. Colour Sound has enjoyed a close relationship with Sam Tozer over the years, and his pre-viz took place over a week at its London facility. This was the largest project the LD and his nine-strong team had been involved in, and such was the scale that Colour Sound itself shipped 20 containers out to the desert.

All 360 of the JDC Lines were deployed on the UG1 stage (the biggest in the Underground area), where Kris Goodman, who was directing this stage, handled the mammoth task of programming. 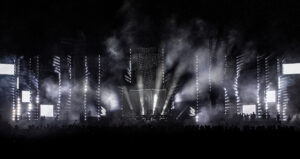 “Picking the right units for the job was vital,” explains Tozer. “The products we purchased had to have the wow factor for this event but also be a product LDs would want in the future. And I felt, as did most of the other LDs who visited our stages, that the [JDC] Line was one.

“I wanted a linear fixture that I could use to trace the architecture of the stage. In combination with the X4 Bars and FR10s we followed pretty much every line on the stage. I also wanted a big strobe look, which they delivered on, but had the additional capability of creating pixel LED effects as well.” 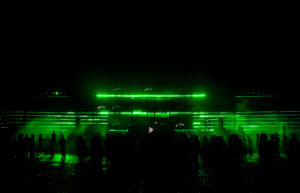 As for the JDC1, these were split between the large UG1 and UG2 stages and the X4 Bars divided between these stages (in particular UG2) and UG3. But the biggest triumphs had been in the artistic programming. “We used the full pixel-mapping facility and had to work out a new way of programming them, as there were a lot of parameters on the desk,” Tozer observes.

The biggest challenge was creating a unique look for all stages “but also having enough dynamic to keep audiences engaged visually for three days,” he explains.

From a production perspective the event had been a complete triumph. “Our brief was simply to create something that had never been seen before, and we managed to come up with these concepts. I think all the stages we were responsible for were loved by the locals, and the MDLBeast socials certainly expressed that,” Tozer adds.

In addition to Kris Goodman (UG1), Sam Tozer was supported by a team of lighting directors including Alexander Hesse (UG2), Chris Scott (UG3), and Ryan Dennett (UG4), with Alex Wilson, Charlie Vincent, Will Burton, and Matt Lee handling video respectively on those stages.

Due to the size of this event, along with significant demands from other shows in the region, Colour Sound has now opened a 30,000 sq ft warehouse in Jeddah – a rare alternative in the Middle East from the heavily populated rental hub of Dubai. Explaining the decision, Cruickshank says: “[Soundstorm] was a massive rave in a part of the world that hasn’t really seen it before. It’s good to be at the beginning of something culturally.”