Quiz für Dich (Quiz for You) is the name of Germany’s new prime-time quiz show, airing on Sat.1 and moderated by Jörg Pilawa. At first glance, it may seem like this format has already been done many times before – but Quiz für Dich injects a breath of fresh air into the concept by introducing a special twist. 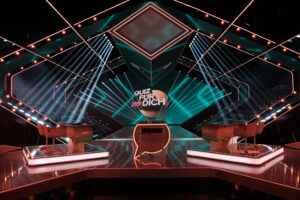 The lighting design is by Jerry Appelt, who has again turned to GLP for the majority of the lighting tasks.

In each show, four celebrities compete against each other in teams of two and play for money that is to be donated to a good cause. However, this good cause does not remain abstract, as it does in so many other shows, but is given a human face, since the profit earned benefits a specific person who volunteers for a charitable purpose. The sudden surprise is revealed in each program with the support of hidden cameras, creating moments of genuine shock and deep emotion on the part of the recipient.

The show was produced at the EMG Studios (formerly nobeo Studios) in Hürth, Cologne, with Appelt – who frequently uses lighting solutions from GLP for his TV productions – acting as LD and DoP. 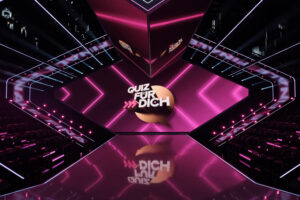 In addition to classics such as the impression S350 and impression X4 L, which serve as stage personnel and audience front and rear lights, Appelt has deployed a large quantity of the ultra-compact impression FR1. A total of 162 GLP impression FR1, 57 impression S350 Wash, 40 S350 Spot, 56 X4 L, 18 X4 Bar 20, and 25 pieces of the new FUSION Stick FS16 Z – with the special halo ring around the front lenses – are in use.

“I’ve had a lot of experience with the small, versatile FR1s,” says Jerry. “They now play a special role in Quiz für Dich because they really define the visual look of the set. Since these are moving-head devices, we are able to easily position them according to the changing camera axes, which of course makes the work a lot easier.”

The GLP impression FR1 is one of the most compact moving lights available in the marketplace. It has a powerful, homogenized 60W RGBW LED that produces crisp colored or pure white beams with variable color temperatures (2,500 K to 10,000 K). The quality of the visual output was the primary focus when the FR1 was being developed. The FR1’s beam remains clean, homogeneous, and clearly defined in the narrow area over the entire zoom range (3.5–35 degrees) – the optimal prerequisites for use in front of cameras. 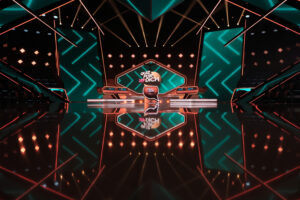 The already well-proven impression S350 once again stepped up to the mark, as the designer explains: “Since the set has numerous video elements, I needed a light with enough power to be able to hold its own alongside the other visual media. The exemplary color-rendering qualities make the S350 a really good tool in TV production environments.”

The linear solutions provided by the impression X4 Bar 20 and FUSION Stick FS16 Z offer various decorative backlight effects. “We were able to generate beautiful effects with the zoom function of the FS16 Z Sticks in particular,” adds the designer.