Theatre lighting design specialist Tyler Micoleau recently collaborated with New York based Public Theater’s Public Works programme, lighting a production of the musical Hercules, a world premiere presentation of a stage musical adaptation of the Disney film, developed in a unique collaboration between The Public Theater and Disney Theatrical Productions.

To add poignancy, the venue chosen was the outdoor Delacorte Theater in New York’s Central Park, and helping Tyler to achieve his objectives were 34 Fusion Par 7’s and 20 Fusion Stick battens, operating alongside the repertory house rig.

Tyler has a long history of working on productions with Lear deBessonet, founding director of Public Works, and has designed four productions for The Public Theater at the Delacorte.

Stated the LD, “Musicals are not the typical production at the Delacorte Theater and I needed additions to the repertory lighting package that could contribute the color changing and dynamics more typical to musical theater than a straight play. While in recent summers, The Public Theater has had some color changing LEDs and a small inventory of moving lights, they haven’t had weather-resistant (IP65 or better) ratings. 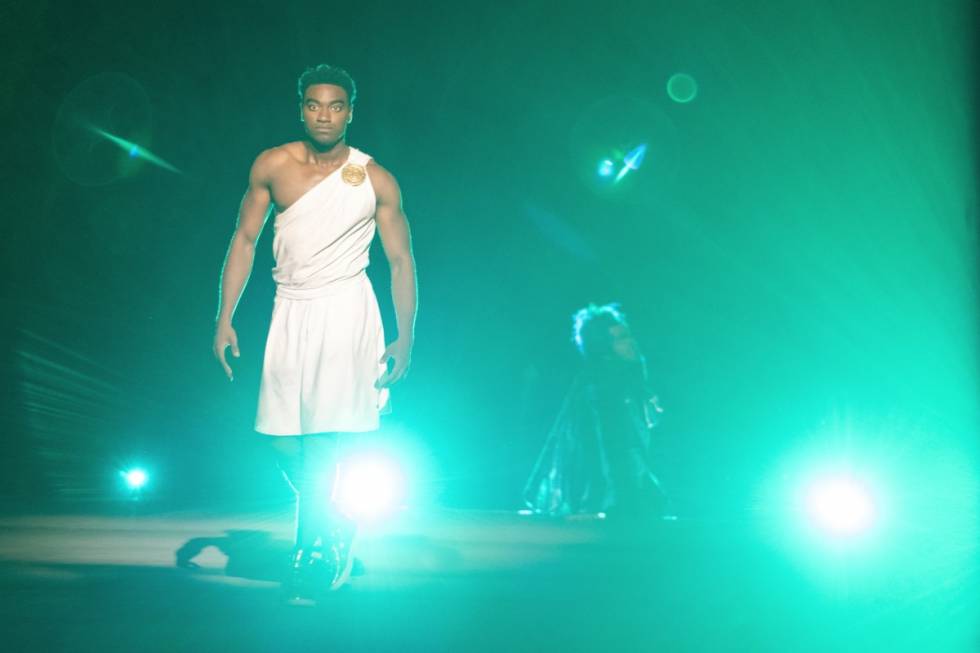 Both he and Alex Brandt (the Lighting Supervisor of The Public Theater) had also been interested in seeing what kind of IP65 rated equipment was currently on the market as the latter was tired of having his electricians constantly swapping out gear due to wind and rain damage.

“In order to get the lights integrated into the set in places where they couldn’t be covered, the IP rating was key,” agreed Brandt.

Since Hercules had a limited run of only eight performances over two weekends, and only one week of production time, Tyler contacted GLP to see what was available.

“I already had the relationship with them from the Broadway production of Be More Chill, so I immediately approached [GLP Inc president], Mark Ravenhill and as it turned it out, they had just acquired a company making these very IP65 rated fixtures.” Alex Brandt agreed that the FUSION Par 7 and FUSION Stick formed “the perfect additions to the rig.“ 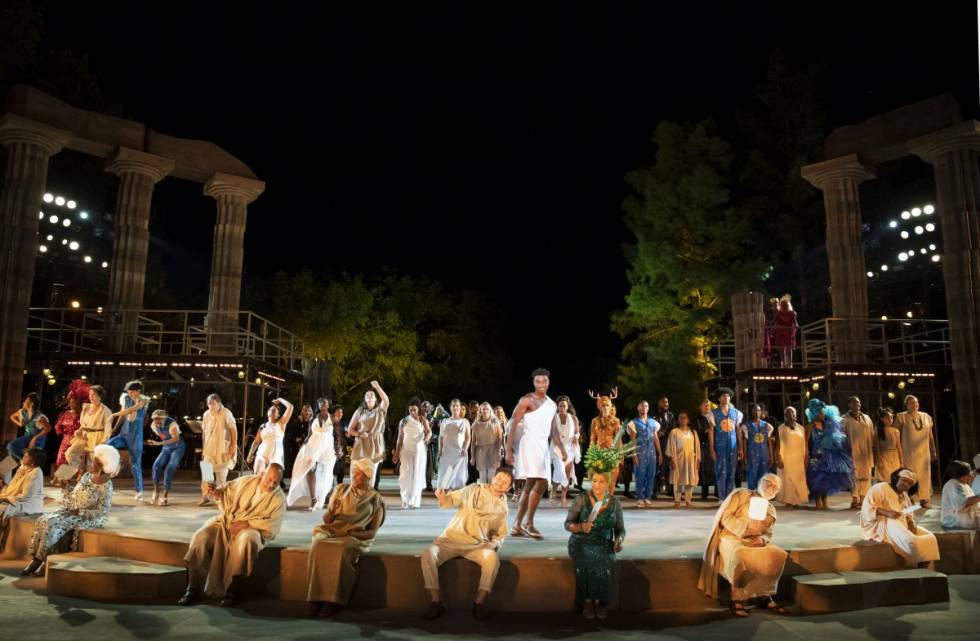 With a large stage which is completely exposed to the elements the lighting crew had to withstand heavy rain storms during the first night of focus, and several days during the two week run when New York City experienced thunder storms and very high winds. “Not having to cover these fixtures to protect them from the elements is huge when the hanging positions are up to 60ft in the air,” he notes.

Tyler Micoleau had previously put the Fusion fixtures through their paces in the Park, at a demo in July, and he noted that the LEDs and optics bore similarity to GLP’s impression X4 Bars. He approved their addition to the lighting rig “because they were exactly the right tool.”

He explained further. “Beyond the IP65 rating, the Fusion fixtures would give me the color changing direct view and accent lighting that Hercules required.”

The set itself was a wooden replica of an ancient Greek theatre ruin surrounded by the trappings of a contemporary archaeological dig in the form of scaffolding. “The FUSION Sticks integrated very well among the metal truss structures of the scaffold platforming, creating end to end linear arrays across the front. Pointing towards the audience, they gave me a line of LED pixels that tied the set together. The FUSION Par 7’s had a very compact profile and made for excellent uplights at the base of the six enormous (28ft) Grecian columns.” 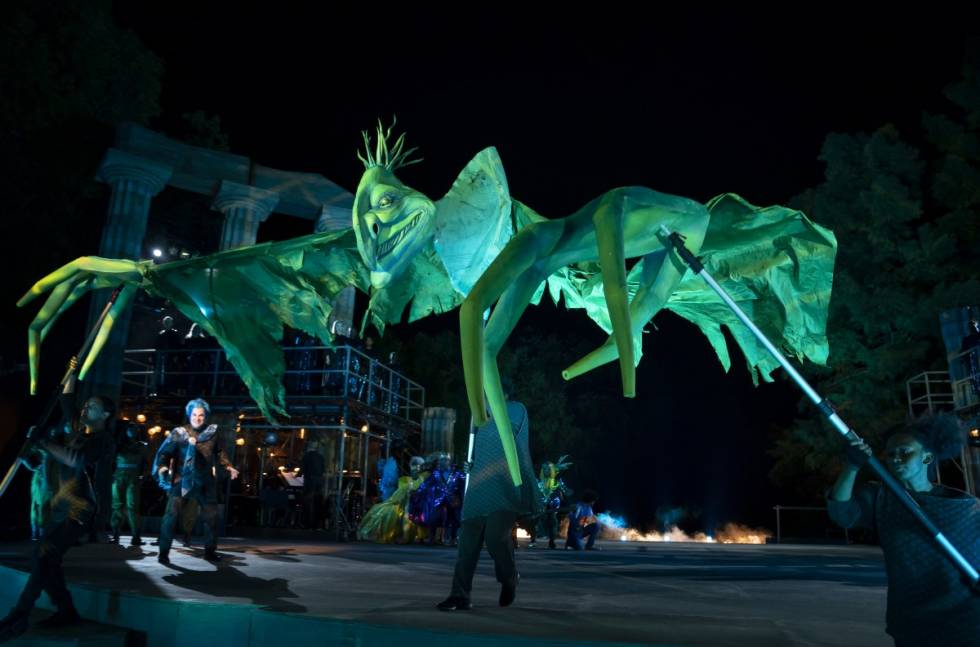 Assessing the fixtures’ color changing and accent lighting attributes, he said, “The FUSION Stick in particular had a terrific combination of the right direct view look (simple lines and unpixellated, homogenous LED lensing) that I wanted, and LED wattages powerful enough to cut through the massive amount of ambient lighting from the repertory lighting rig.

“As for the FUSION Par 7 this is a solid LED Par source in a very compact package: its punch for its size is its best feature. The color rendering was excellent for outdoor, long distance viewing.”

Tyler maximized the fixture’s color mixing and abilities to provide quick cuts as well as fades. “The beam spread of the FUSION Par 7 is pretty tight at 6º, so diffuser lensing was important to me for the column uplighting. We used the Rosco Opti-Sculpt™ product to great effect, spreading the beam to a 40º/60º oval.” 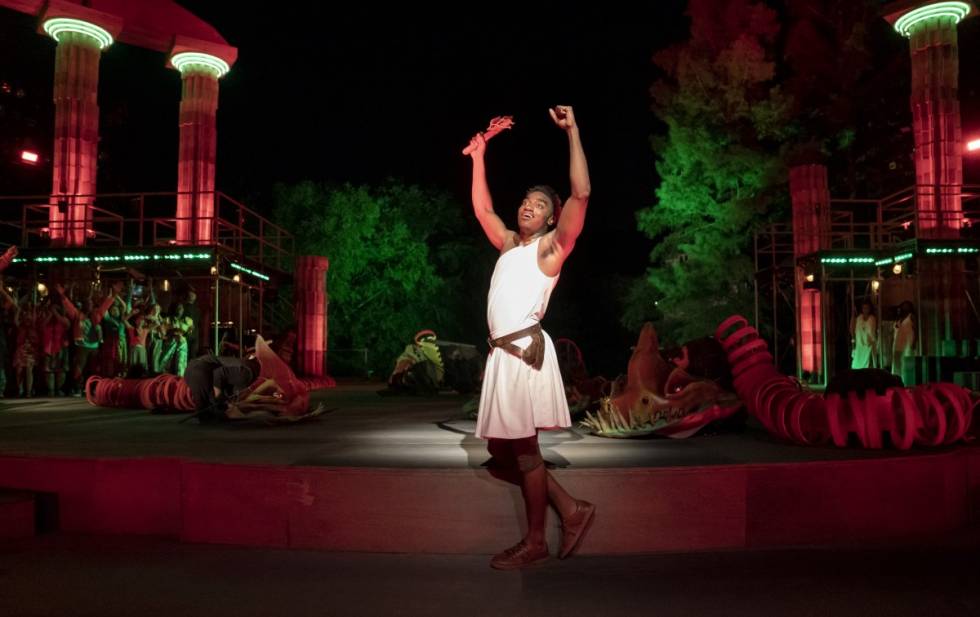 The structure of the scenic scaffolding prevented him for rigging the FUSION Sticks as a continuous, seamless batten. “Instead, we had to hang each FUSION Stick 10 independently — which supported the segmented nature of the scaffold architecture. We opted not to use diffuser plates as the lenses pointed out just over the audience and I wanted them to have full access to the LED pixels and the lines of the 6º beams.”

The overall impact of GLP’s new IP65-rated FUSION fixtures was there for all to see. Summing up, Tyler Micoleau said, “Having a line of LED fixtures available with the quality and precision I’ve come to expect from GLP for my work outdoors with The Public Theater in Central Park was beyond fantastic. The FUSION by GLP range offers so much power in small weatherproof packages. Their compact size and versatile color range are ideal for scenic accent lighting.”

Alex Brandt credits Miles Dudgeon at GLP for his assistance and Chris McMeen at Christie Lites for the delivery of the lighting system.