GLP proved at this year’s PLASA Show that it is sometimes unnecessary to take more than a minimal booth to create maximum impact.

Its formula for the UK’s premier trade fair, as it reawakens, was simple: take a stand immediately inside the main entrance and blitz the crowd with a battery of JDC Lines, its incredibly bright hybrid strobes, as they set foot inside the hall. 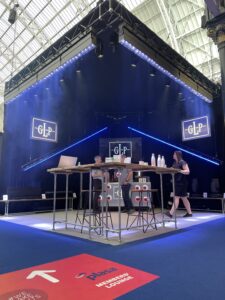 These lined up alongside the FR10, the new battery operated Creative Light 1, and FUSION PAR FP7—the first time these ranges had been seen in public. And all anyone wishing to see these in full action had to do was grab a cup of superior, barista-served coffee from the vast range available, and settle back and watch a video created by David Stewart and Greg Westwood and designed by Morgan Evans.

“That video proved well worthwhile,” states GLP UK boss, Simon Barrett. “In fact, the show generally exceeded expectations, with a lot more people than I anticipated. Everyone was excited to be back and it seems like this is the green light [for the industry] to go.” 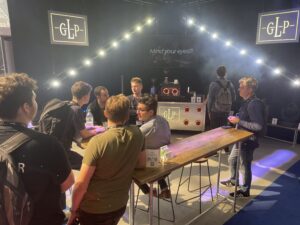 With Barrett and colleague David Stewart hosting, he says it had been the correct decision to make their presence largely “people focused rather than product focused”, and they were able to have productive chats with many customers and LDs about the future, as the industry slowly wakes up.

They also had plenty of new sales to report, with FR10s going to Christie Lites and dry hire company Nexus, as well as being specified by LD Neil Austin for the West End production of Frozen.

Also heavily invested in the new IP65-certified FUSION PAR FP7 is TSL, with owner Sam Tamplin investing in 200 of the fixtures for an outdoor spectacular.

Another major sale confirmed at the show was a “significant investment” in JDC Line 1000 from Haydn Cruickshank at Colour Sound Experiment. Some 360 metres of the 1m-width JDC Line variant have been specified by an LD for a show in December. 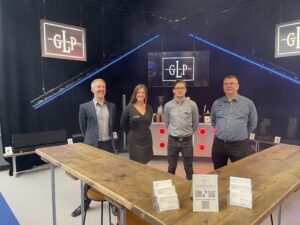 States David Stewart: “The differentiator is the unique high-powered continuous white LED strobe with pixel mapping, a bright RGB continuous line. It is something never seen before and innovative – but in addition to the LD, it has to work for the rental company with high-quality construction and reliability.”

Finally, the Creative Light 1 also received plenty of attention at PLASA. “It is our first battery wireless fixture in the GLP range, and battery wireless is now becoming a fad, with its attention-grabbing LED twinkle,” believes Stewart.

By borrowing a ‘you had me at hello’ movie moment, GLP had the audience immediately they had walked through the door, “simply by ‘blinding’ them at the front entrance,” conclude the two GLP men.