MIRRAD lighting designer, Jamie Thompson, has been accompanying Irish rock band, The Script, for most of the 12 years they have been touring. And for much of that time GLP’s unique LED automated lighting solutions have formed a central part of his inventory, dating right back to the original impression 90.

By the time the band’s second album was released they were already playing arenas, and now, with the release of their sixth album Sunsets & Full Moons late last year, they were recently back playing Europe’s major venue circuit. 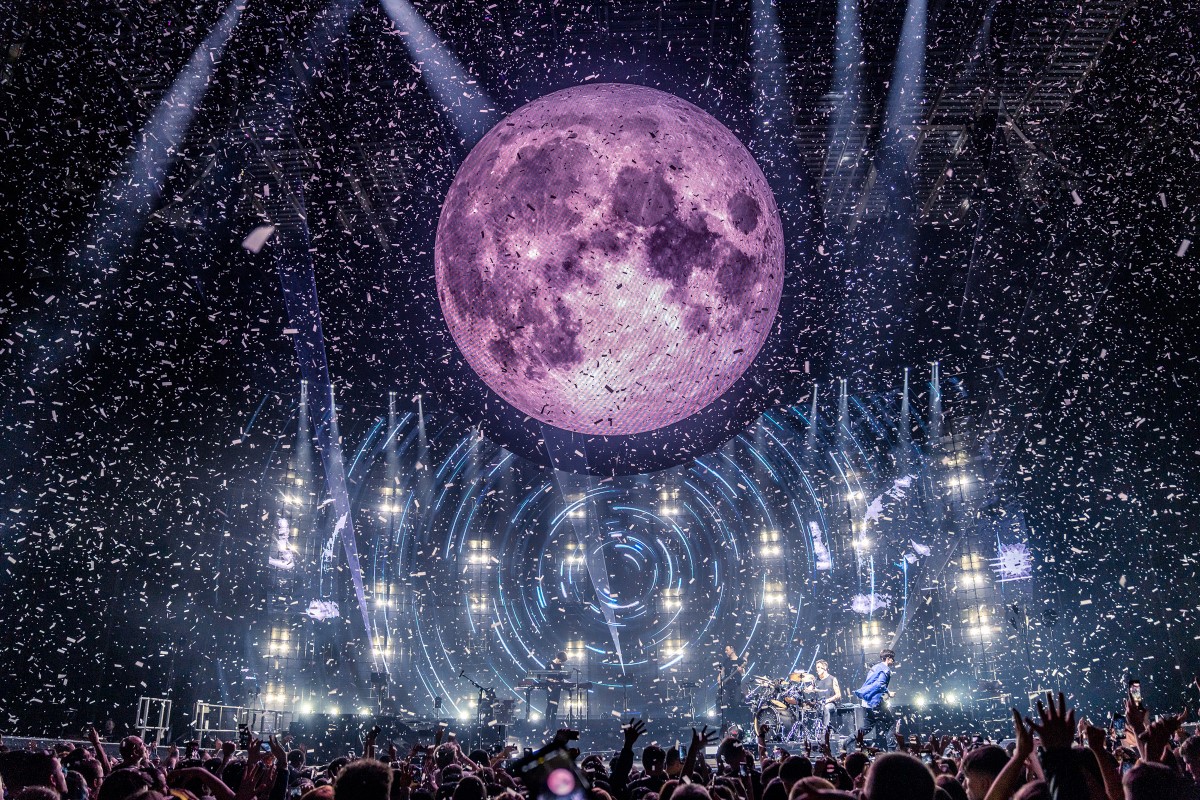 For the production designer, GLP’s new generation of products has provided huge scope to depict the geometry and vivid color suggested by the album title, enabling him to build a set with a lot of curvature and concentric arcs. “When the Script write an album they will generally produce good imagery,” says the former KOI award winner. “The iconography this time is two circles with a horizon line in between, representing the sunset and the full moon—and that was the concept they wanted to portray onstage.”

Thompson was soon sitting down with the band’s co-founders Danny O’Donoghue and Mark Sheehan, deciding the most practical means of representing that in 3D. PRG’s PURE 10 28m x 10m 70% transparent curved video screen would form the centrepiece, but bringing the stage and scenography to life were a vast selection of GLP’s FR10 Bars, each containing 10 powerful 60 Watt RGBW LEDs that color match with the entire GLP X4 and FR series. In addition to these were 42 of the modular KNV Cubes, containing 25 super bright white LEDs, surrounded by 16 RGB LEDs for creative effects and powerful backlight illumination; JDC1 hybrid strobes, around 72 of which were used in this lighting plot and finally 20 of the tiny impression X4 S, featuring 7 x 15W RGBW LEDs and a 7 °-50 ° zoom optic. 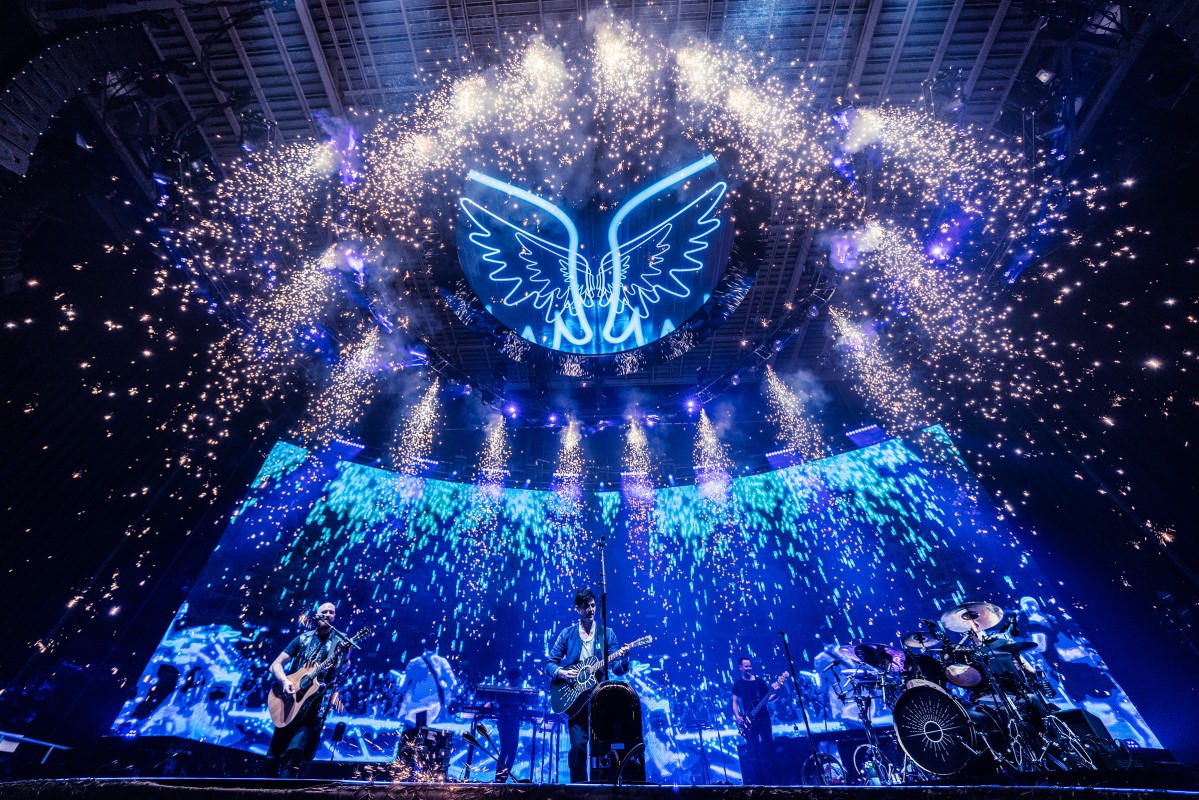 Although he only used eight of the FR10 battens he noted that they deliver major impact. “The FR10 bars are not only a more powerful version of the X4 Bar 20! The FR10 bars contain 10 lenses, each of which can be zoomed individually – allowing for completely new looks. Each cell has 60W power and is therefore very bright. This makes the FR10 bar ideal for the long distances in arenas. We use it to create a wall of light up to 12m high, and since they are still new to the market, they have a tendency to look unique.”

The designer was also aware that PRG, from whom he sourced all the automated lighting, were major customers of GLP and that he would be able to deliver precisely the looks he wanted. Among the curved effects were the large video screen, which was truss mounted, with all the FR10s mounted on top in a curved array, reflecting back onto the stage to produce a wall of light. 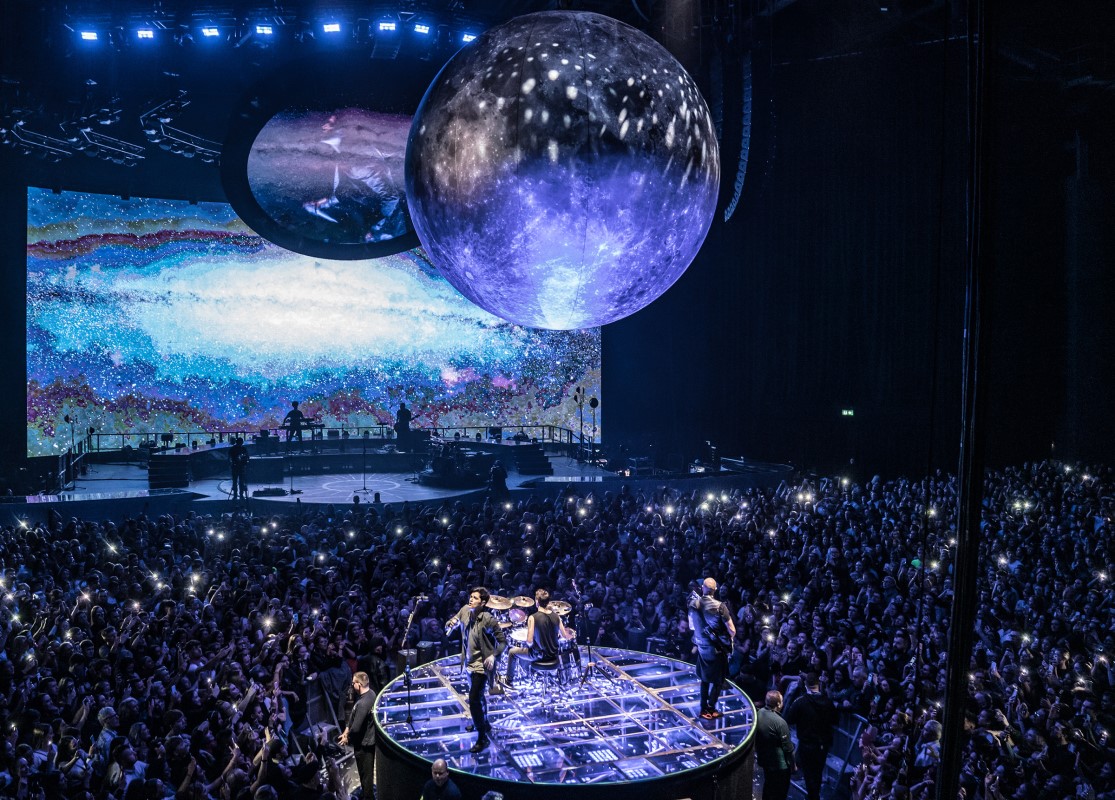 At each side of the stage were 8ft circular screamers (perspex stage risers) and underneath these were the KNV Cubes. “David Stewart [at GLP UK] suggested they would be perfect,” Thompson reports. “We had seen them when we went over to GLP in Karlsbad and they are massively bright. So we ran them here in both strobe mode and RGB and they read particularly well to camera.”

Meanwhile, the compact X4 S were positioned equidistant on a shelf distributed around the rear walkway, which matched the curve of the video screen. “These were used for air effects and as backlight for twinkly effects. They are just so lightweight and easy to fit anywhere.” 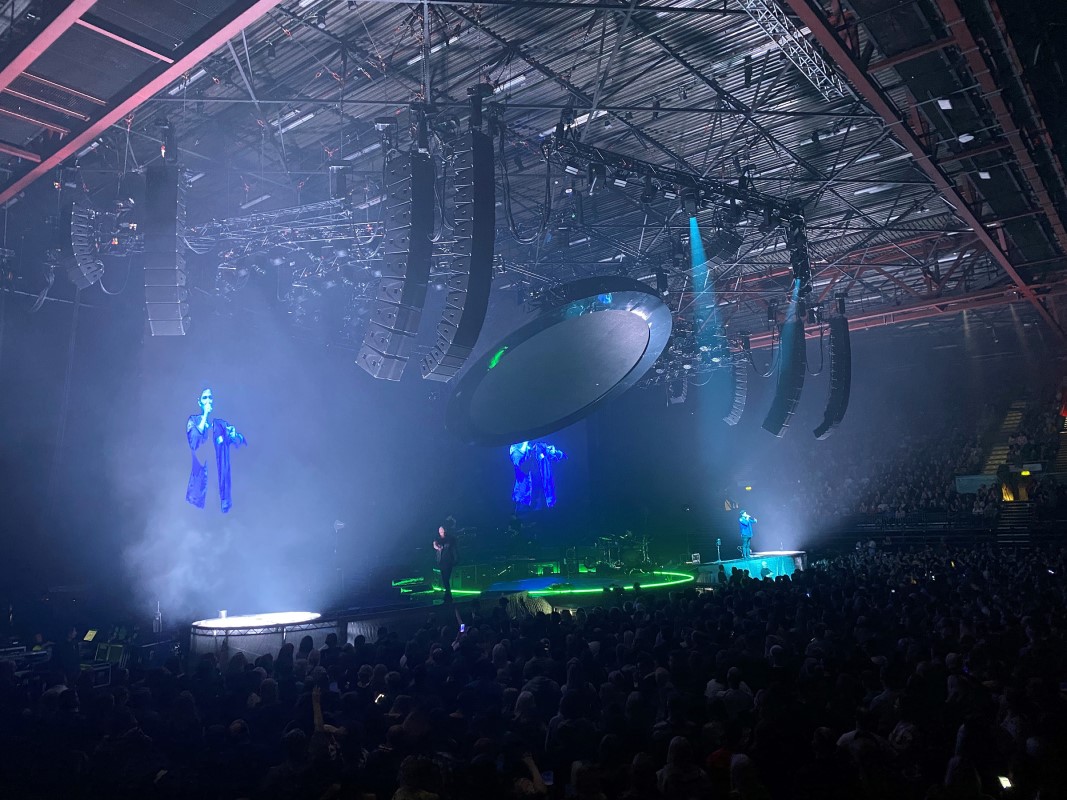 As for the JDC1,these were used in conjunction with the transparent screen. Eight trusses, each containing six JDC1, were rigged vertically and mapped through an Avolites Synergy, integrating lighting and video through a server under master Avo Sapphire desk control. Hence MIRRAD were able to run them in full 68-channel pixel mode and pass lo-res video through them.

Of the versatility of the JDC1, Jamie Thompson says, “In one sequence we had a huge starfield on the video screen and we were able to mimic the stars behind with the JDC1 to create more depth. This was a really cool effect as we could have strobe hits happening from a bunch of JDC1’s behind the screen, which produced an incredibly bright light.” They also mounted JDC1’s as blinders around the B stage—a 16m circle inside the FOH area. 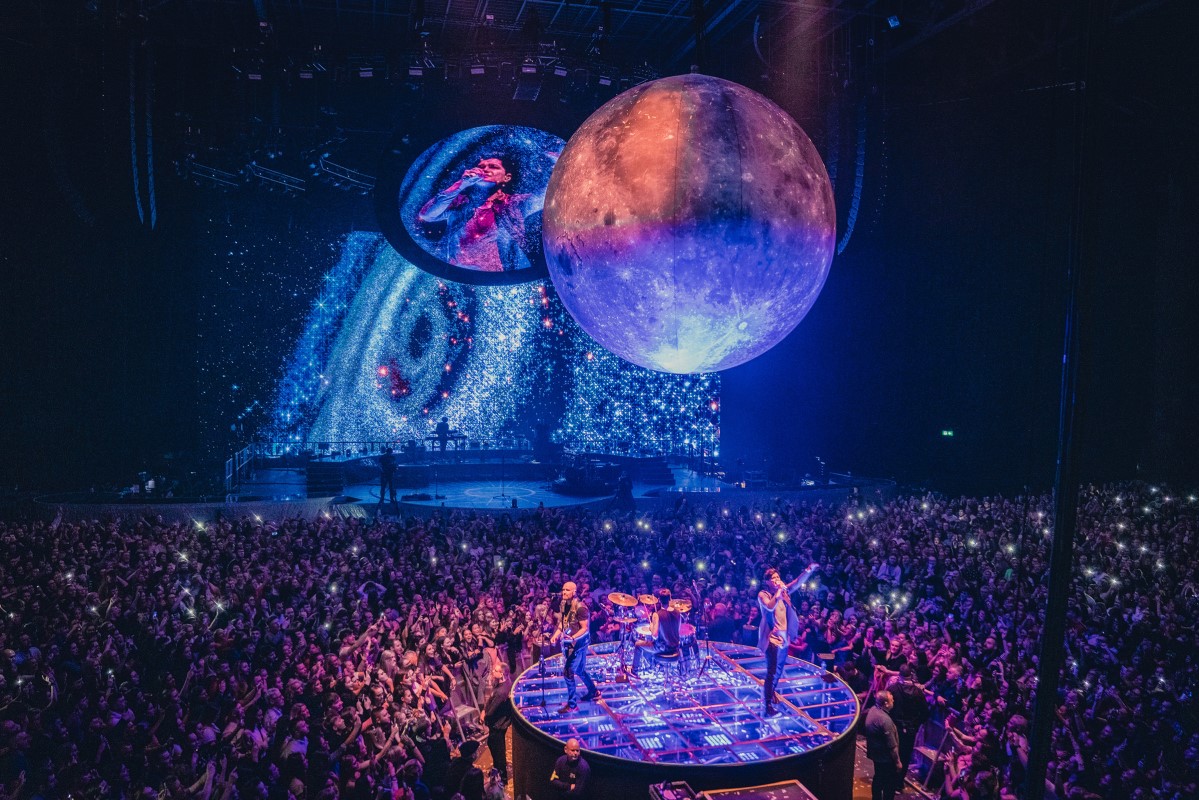 Jamie Thompson credits the assistance from David Stewart, particularly the speed with which he had been able to deliver personalities for the brand new FR10, for visualisation on WYSIWYG during pre-production.

“GLP are always great for us,” said the production designer in conclusion. “All fixtures ran faultlessly throughout the tour and we couldn’t be happier with the outcome. It was a really good tour all round. 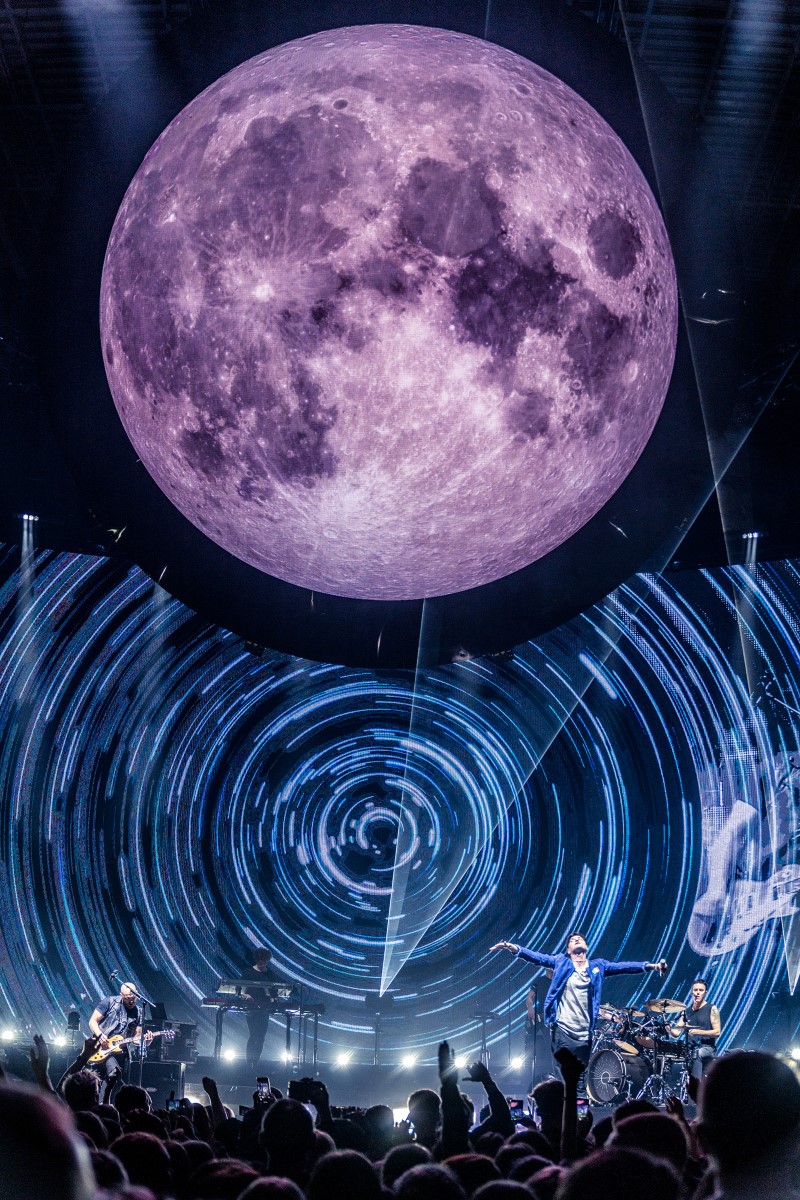